LIMA, Dec 26 2008 (IPS) - More than half a million Peruvians who lost their personal documents during the 1980-2000 civil war will no longer have to assume the often impossible task of proving their identities, thanks to a new law. 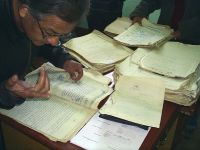 According to a report by the ombudsman’s office, 251 civil registry offices in seven provinces of Peru were completely destroyed in the armed conflict, which resulted in the disappearance of the birth, death and marriage certificates of entire villages, especially in the impoverished southern highlands provinces of Ayacucho, Apurimac and Huancavelica, where the population is mainly indigenous.

Under the new legislation passed by Congress on Dec. 10, which will go into effect as soon as it is signed into law by President Alan García, the National Register of Identification and Civil Status (RENIEC) must reissue identity cards to Peruvian citizens whose documents were destroyed.

It was in Ayacucho that philosophy Professor Abimael Guzmán launched the Maoist Sendero Luminoso (Shining Path) guerrilla movement in May 1980, unleashing a civil war that cost 69,000 lives over the space of two decades.

In November 2006, IPS reported from the town of San José de Secce, capital of the district of Santillana, in Ayacucho, that hundreds of local residents had no access to the government’s programme of reparations for victims and survivors of the political violence because officials demanded that they produce documents that were lost during the war.

IPS discovered that the authorities required people to present documents that had been destroyed in local civil registry offices, even though the state had copies of the lost documents.

Devastated by the effects of the armed conflict, and suffering from the most absolute poverty, these local residents are in no position to make the costly, time-consuming trips to the district capital and go through the endless paperwork to exercise that most basic of rights: the right to an identity.

The lack of documents has barred their access to social assistance and anti-poverty programmes.

“The new law recognises the right of citizens to an identity and the state’s obligation to grant identity papers. Before this legislation was passed, local residents had to prove that they existed, but they couldn’t do so because their documents were burnt or lost during the armed conflict,” Rocío Vargas, a lawyer with the international relief and development organisation Oxfam, told IPS.

Oxfam helped create the Alliance for Citizen Rights (ADC), which has brought together non-governmental organisations, government agencies, and international bodies around this task since 2004.

An estimated 500,000 people were left without documents during the war. The Shining Path targeted not only local authorities, but any sign of the presence of the state, including municipal and provincial government offices and civil registers. Civil registrars were killed or fled their villages, and hundreds of books containing birth and death certificates were burned by the guerrillas.

Thousands of villagers fled their homes and took refuge in other provinces, leaving behind their identity documents. The Truth and Reconciliation Commission (CVR) estimates that 600,000 people were displaced by the war.

But it was not only Shining Path that destroyed civil registry offices.

The ombudsman’s office report states that when the army set up a base in the town of Manta, in the province of Huancavelica, the troops destroyed the office where the local records were kept, and all documents from 1959 to 1983 – the year the military began its counterinsurgency efforts in the area – were lost.

Under the current law, Peruvians must present their birth certificate to obtain a national identity card, or a death certificate to apply for social assistance and reparations available to those who lost family members in the political violence.

“RENIEC will have to rebuild the records of the civil registries that were lost during the conflict, using information that is in their files and archives, and also by turning to other state entities that could have copies of birth certificates, such as schools, where that document is required to register students,” said Rocío Vargas.

“But the law also establishes that citizens, in cases in which no documents are found, can present a sworn statement with two witnesses who vouch for their identity. The state must trust people who are in this situation, who by the same token must know that if they lie, they will be punished by law,” she added.

In the eight years since the civil war came to an end, only 11 percent of the civil registry offices that were damaged or destroyed have received authorisation to reinscribe citizens.

The new law also states that RENIEC must reissue identity documents without waiting for people to apply for them.

“Citizens are currently responsible for getting the whole process going, when it should be the state’s responsibility, because the state has in its power the documents needed to reestablish identities,” Susana Huamán, the head of the programme of identity and citizenship in the ombudsman’s office, told IPS.

The new law will also streamline and speed up the slow-moving process of reissuing identity documents, which in many villages has not even begun.

That is true, for example, in the towns of Apongo and Sacsamarca, in Ayacucho province, as well as in Pichirhua in Apurimac, where 60 years of records were destroyed.

“In the assessment of the situation carried out in the provinces that were hit hardest by the political violence, like Ayacucho, Huánuco, Huancavelica, Junín, Apurimac, Cuzco and Puno, it was found that the main difficulty was that people could not find a copy of their birth certificates, to begin the process of applying for a new identity card in the civil register,” said Huamán.

“It is a perverse kind of logic, because the copy of the birth certificate has to be issued by the civil register itself,” she added.

“The widespread lack of documents among people in a country with economic growth rates like those of Peru reflect the inequality suffered by a broad swath of citizens who do not exist in the eyes of the state,” said Oxfam’s Vargas. “It is impossible to reduce poverty or bolster development if the identities of these half a million Peruvians who suffer exclusion are not restored.”

The report by the ombudsman’s office concluded that copies of 32 percent of the civil registry books from the offices that were destroyed can be found in the General Archive of the Nation.

“This shows that the state is already in a position to restore the identity of tens of thousands of Peruvian citizens,” said Vargas.

The end of the first week of January is the deadline for President García to sign the new law.