PRETORIA, Dec 15 2008 (IPS) - Sanitation is a key element of health, and hygiene a basic need for survival. Yet, millions of South Africans, especially those living in rural areas, do not have access to basic services, such as clean, running water and sanitary toilet systems. 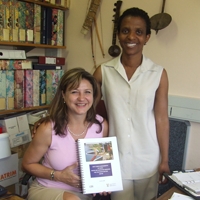 Although the South African government has made major strides to improve water supply within the last decade, much less progress has been achieved with regard to sanitation. Major hurdles are the financial sustainability of investments sanitation technologies as well as a lack of attention to maintenance, experts say.

Adding to this is the challenge to halve the number of people without sustainable access to safe drinking water by 2015 in accordance with the Millennium Development Goals (MDGs).

Louiza Duncker: Some other challenges include insufficient coordination between stakeholders, such as government, implementing agents and the users of toilets, insufficient community participation, non-compliance of some sanitation projects to policy requirements and minimum design standards and norms.

Barriers to sanitation are also created through inadequate maintenance of sanitation infrastructure due to capacity constraints at local and municipal level.

IPS: Please explain the tight linkage between water, sanitation and health. LD: Clean water and proper sanitation are crucial to maintain the cleanliness, personal hygiene and health of an individual. Water, sanitation and health are totally interdependent as the majority of pathogens and parasites are found in excreta, which are responsible for a variety of illnesses, such as cholera and diarrhoea, especially in rural and peri-urban areas. Therefore, the main risk lies in the contamination of the environment by faeces spread near places where people and animals live and next to or into drinking water sources.

GM: For example, people are expected to wash their hands after using the toilet and before touching their food to ensure that they are free from sickness and diseases. Furthermore, in areas where people defecate in the bush, their faeces flow into the river during the rainy season and contaminate the water. As a result, people who drink this water without boiling it contract diseases, such as cholera or typhoid.

IPS: How do urine diversion toilets work? LD: Urine diversion or dry-box toilets are different from other sanitation technologies in that they do not use water in their operation and they separate faeces and urine. The South African designed urine diversion toilet has a specially adapted pedestal that channels urine into a soak pit beneath the toilet chamber, whereas in other countries, it is collected in containers, diluted with water and used as fertiliser in home gardens.

GM: Faeces are dropped into a vault and covered with dry material such as ash, lime, dry soil and sawdust to deodorise decomposing faeces while controlling moisture and facilitating biological breakdown, which is a form of composting. A properly used urine diversion toilet eliminates odour, flies and is low on maintenance.

IPS: How do they contribute to improved sanitation and hygiene? GM: The urine diversion toilet is based on the concept of an on-site 'closed' system, as opposed to the linear nature of waterborne sanitation. Human excreta are treated as a resource and processed until they are completely free of disease organisms. The nutrients contained in the excreta are then recycled by using them as fertiliser in agriculture. This does not only save water but reduces pollution.

LD: The fact that urine is separated from faeces reduces the growth of micro- organisms which causes the smell that attracts flies and other diseases carrying insects, which in turn, compromises people's health.

LD: Sanitation systems should also meet the needs and interests of people and be designed in such a way that they complement existing social and cultural practices. People's choice and sanitation needs should be respected.

IPS: How effective are South Africa's sanitation policies? LD: The Department of Water Affairs and Forestry has developed several policies and strategies in the water sector, such as The National Policy on Basic Household Sanitation in 2001 and the Strategic Framework for Water Services in 2003. The sanitation policy emphasises that sanitation involves more than just the provision of toilets; it also includes community participation in decision-making, safer living environments, greater knowledge of sanitation-related health practices and improved hygiene.

GM: Despite the existence of good legislation, the challenge lies in the implementation of these policies and strategies. The push for delivery in addressing the MDGs and reducing the sanitation backlog put local councils under immense pressure to provide infrastructure as fast as possible. This leads to minimum design norms and standards not being met because quantity is favoured above quality.

IPS: What needs to be done to close the sanitation gap between urban and rural areas? LD: Although water and sanitation have been linked for many years, improvement to water access has made far bigger gains than improvements to sanitation. People living in urban areas are more likely to have sanitation facilities than people in rural areas. However, the rapid growth of many cities, especially in developing countries, has caused pressing challenges in urban areas, too.

GM: Addressing the sanitation gap requires creating better institutional environments to promote the development of alternative technologies, discussing the need to balance environmental concerns against individual demands for sanitation, a more integrated and demand-responsive approach and a willingness to place more emphasis on the needs of the people, sustainable functioning and effective use of the systems.