RIGHTS-LIBERIA: ‘We Will Use Our Children as Shields’

HARBEL, Liberia, Dec 9 2008 (IPS) - “We are not just going to let a bulldozer come in and demolish our land. If possible we will use our children as shields. We will have to do that,” exclaims Eric Lavella, a middle-aged Firestone factory worker living in the heart of Liberia’s largest rubber plantation, 60 kilometres south of the capital Monrovia. 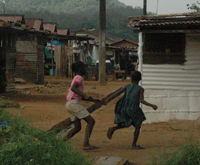 Lavella’s neighbourhood of Firestone contractors, retirees, marketers and squatters – estimated by community leader, Reverend Johnson Flumo, to be around 3,000 – is crowded into breezeblock and corrugated metal shacks haphazardly built in the town of Harbel’s marketplace.

But after more than two decades of selling food, clothing and plastic Chinese goods, the market dwellers’ days are numbered. Firestone intends to shift the vendors to a newly constructed market next month and tear down the old commercial lot. The new location will have over 1000 stalls, but no housing. Both sites are on land Firestone says is theirs until their lease runs out in 2041.

“Firestone has permitted individuals – who do not work for the company – to live free of charge on the site of the old marketplace since the end of the civil war in 2005,” says Firestone, in a statement to the media. “These individuals have been notified of the plans for renovation and have been asked to find alternative housing.”

Meanwhile, the market community residents have filed for a court injunction protesting the company’s Jan. 15 eviction order in the county capital of Kakata.

“In 1987 a gentleman’s agreement was reached with Firestone, where the market would be detached and autonomous under the [government-run Liberian Marketers Association] LMA,” explains Henry Mulbah, a former Firestone employee and union official, now coordinating the market residents’ legal effort with Reverend Flumo. “They allowed people to build their shops and warehouses with a dwelling room for someone to sleep there. The marketers were allowed to move their families in slowly over time.”

“They want to stay because they have no place to go, but in the event they have to relocate, they want compensation,” Mulbah continues. “The key thing is that the Liberian government has been collecting real estate taxes on these structures.”

Firestone, a U.S. company bought by the Japanese rubber conglomerate, Bridgestone, twenty years ago, was granted exclusive rights over one million acres of fertile land in 1926. The company has since been linked to labour abuses, including use of child workers, an over-zealous private security presence and a poor environmental record.

The Monrovia-based non-profit, Save My Future Foundation (SAMFU), which partners with international watchdog Global Witness to monitor the plantation, reports: “Firestone, now under immense pressure, has made some changes to address some of these problems. However, some of these changes fall far short of the holistic and far reaching reforms that are needed to improve the living and working conditions of employees.”

After a controversial contract renegotiation in 2005, brokered by the then- transitional government in the aftermath of Liberia’s protracted brutal civil war, worker unrest and strong criticism from international bodies like the United Nations peacekeeping Mission in Liberia helped push the company to revise the terms of its concession once more with President Ellen Johnson- Sirleaf’s government in March.

SAMFU’s director, James Makor, in an interview with IPS, said, “The new contract does not consider a third party – it’s just the government and Firestone. So the labourers do not have claims, as third party rights are not recognised for local people, employees and dependents.”

“Firestone flushed the system,” Makor says. “People wanted a public hearing but the next day the bill was passed by the Liberian national legislature. The speed was too fast; it was like everything was already programmed. There was nothing anyone could do.”

Eric Lavella first arrived at Firestone from rural Lofa County in Liberia’s north twenty years ago. He stayed on as the refuge swelled with families fleeing the fighting between Charles Taylor’s militia and government troops in 1990, but left when the violence and looting reached the plantation itself.

Now supporting a family of eight, Lavella is back and contracted by Firestone to work a 12-hour night shift helping supervise the conversion of raw latex to processed rubber, which is shipped from Monrovia’s commercial port to markets overseas.

After automatic deductions for taxes and two bags of rice, Lavella’s monthly take-home pay amounts to about $46. As a contractor, he receives no Firestone benefits or housing.

SAMFU estimates Firestone directly employs 7,000 people, most of them rubber tappers making the equivalent of $3.38 a day. Starting work before dawn to meet a daily quota scraping 700 trees for latex, tappers frequently enlist family members or subcontractors to help them complete the arduous task. An additional 4,000 contractors, commonly factory workers and drivers, are paid substantially less at $2.65 a day.

Work as an illegal tapper at night is dangerous but profitable; they can fetch $100 a bucket but risk confrontation with ‘the Gravel Ants’, ex-militia members hired by Firestone to combat illicit workers, and notorious for their brutality during the civil war.

The Harbel market area is sandwiched between rows of crowded red brick houses – official Firestone housing for company staff – while the market dwellers are hemmed into ramshackle lean-tos in and around the commercial stalls. Most pay private property owners to rent a room, who in turn pay real estate taxes to the Ministry of Finance.

President Sirleaf intervened to postpone the company demolition, originally slated for October, so the dwellers would have time to find new homes. But market residents hope the amount of years they’ve lived there – some over twenty years – will help convince the courts to let them stay.

Ami Kamara is a 28-year-old mother from Sierra Leone, and one of those affected by the eviction notice. She lives at the end of a dank, narrow makeshift corridor in one room with her two children and her husband, an engineer sub-contracted to Firestone earning $60 a month. “During the war we were here – things were very hard,” she sighs. “Now we are satisfied with the peace. We have nowhere else to go.”