HARARE, Dec 5 2008 (IPS) - The decision by an international body to again allow some southern African countries to conduct once-off ivory sales has been attacked by an animal rights activist saying elephants are being threatened by poaching because of the breakdown in the legal and social order in Zimbabwe. 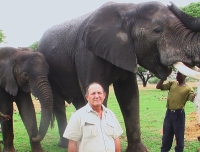 Johnny Rodrigues, chairperson of the Zimbabwe Conservation Taskforce (ZCTF), told IPS that the Convention on International Trade in Endangered Species of Wild Flora and Fauna’s (CITES) allowance of trade in ivory only serves to encourage poaching, particularly in Zimbabwe.

CITES is the international body responsible for regulating trade in endangered flora and fauna. It decided in early November to allow Zimbabwe, Namibia, Botswana and South Africa to sell their stockpiled ivory.

Zimbabwean game farms have been invaded by people without proper knowledge of animal conservation management, according to Rodrigues. The ZCTF was started in 2001 in response to this problem.

The eight year long political crisis has led the ruling ZANU-PF government to encourage farm invasions to placate Zimbabweans. The farm invaders are only interested in lining their pockets and are helped to do so by ivory buyers from China who have flooded Zimbabwe, claimed Rodrigues.

A survey conducted by the World Wide Fund for Nature and the African Wildlife Foundation showed the country has an elephant population of around 110,000 against a carrying capacity of 47,000. It has a legal hunting quota of 500 elephants a year.

The chairperson of the Parks and Wildlife Management Authority, George Pangeti, told the government-aligned Herald newspaper of March 19 2007 that Zimbabweans should benefit from elephant and elephant products.

Banning activities which brought money, including legal ivory trade, to the custodians of the resource was ‘‘nothing but an injustice’’, he said.

But, according to Rodrigues, ‘‘ivory trade only serves to increase the already high incidence of poaching in the country. There are a lot of corrupt people in Zimbabwe who are facilitating illegal trade in ivory. In Zimbabwe it's a big issue. There is a lack of mechanisms to monitor violations as a result of the chaos on the game farms’’.

The animal protection activist alleged that illegal trade is happening via official channels and corrupt officials. He questioned why the auctions, such as the one held recently under the supervision of CITES, should be held behind closed doors.

The ZCTF says about 30 rhinos and close to 20 elephants where killed last year in incidents linked to illicit ivory trade. It estimates that close to a million wild animals on farms, private game ranches and in conservancies have been killed since the beginning of farm invasions in 2000.

The animal rights group has studied 62 farms, 59 of which reported wildlife losses totalling 42,236 animals. These include lion, elephant, python and blue duiker (buck) that are on the list of endangered animals.

A report by the UK-based animal rights non-governmental organisation the Environmental Investigation Agency (EIA) last year alleged that there has been an upsurge in elephant poaching in Kenya and Zimbabwe, a rise in major illegal ivory seizures worldwide and growing consumer markets in the Far East.

The EIA regards unregulated domestic markets as the problem, especially in China, Japan, Myanmar and Vietnam. It alleges the involvement of the Chinese government at all levels of the ivory trade.

However, a 2007 report prepared for CITES singled out China as the one country which has made some progress towards stemming the illegal ivory trade in its domestic market.

The report fingered the Democratic Republic of Congo, Nigeria, Cameroon, China and Thailand as the guilty parties when it comes to illicit ivory trade.

Tom Milliken, one of the authors of the report and a regional programme director at Traffic in east and southern Africa, said about the upsurge in rhino poaching that, ‘‘in terms of CITES, Zimbabwe is in the spotlight and an international task force will be visiting shortly to investigate its performance in rhino conservation’’.

Traffic is a wildlife trade monitoring network partnered by the non-governmental World Wide Fund for Nature and the International Union for the Conservation of Nature (IUCN).

He lamented that ‘‘Traffic has sponsored initiatives to improve the country's law enforcement capabilities (against poachers) but sadly most investigations appear to have collapsed without successful prosecutions’’.

Charles Jonga, director of Zimbabwe's Communal Areas Management Programme for Indigenous Resources (CAMPFIRE) which supports sustainable utilisation, told IPS, ‘‘we do evaluation and recommend conservation action, which is why we were even involved in the ivory sale. We do this on a continuous basis.’’

Zimbabwe says the 450,000 dollars it earned a month ago selling its 3,700 kg ivory stock piles under the supervision of CITES will be used for conservation purposes.