KARACHI, Jan 23 2009 (IPS) - As high-profile delegations from Pakistan visit India after the launch of a month-long cross-border signature campaign to press for resumption of dialogue between the two countries and call for peace, IPS interviewed three Pakistani women who are pushing this agenda in their own unorthodox ways. 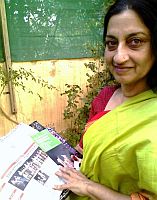 Taranum Ilahi, a yoga teacher and Reiki master is asking Reiki colleagues and students to "send Reiki to help heal Pakistan and bring about peace with India," as she puts it. "I ask them to visualise people happy and smiling, with green fields around them, stretching out to shake hands across the border with Indians".

Reiki, a spiritual healing practice developed in Japan, 1922, is based on the idea that an unseen "life force energy" flowing through people causes us to be alive. Although Reiki is most often administered using the palms to transfer healing energy, it can also be sent ‘long distance,’ says Ilahi.

She estimates that there are thousands of Reiki masters in Pakistan. Although Reiki is most often used as complementary and alternative medicine for all kinds of physical and mental ailments, "it can also be used to send positive energy to the world at large".

"Every night I send Reiki to Pakistanis, to Indians, and to the planet in general," she told IPS. "It’s great that the peace delegation is visiting India. We must all do what we can".

Relations between India and Pakistan, both nuclear-armed, have been tense since the November 26-29 terror attack in Mumbai which left 180 people dead.

India has blamed the attack on the banned Pakistan-based militant group Lashkar-e-Toiba (LeT) and demanded that its leaders be brought to Indian justice.

The Indian demand and Pakistan’s refusal to comply have been grist for the media in both countries to hype up hostility to a point where there has been talk of ‘surgical strikes’ on LeT camps by India and warnings of retaliation by Pakistan.

Many people cautioned Sheema Kermani, the well-known dancer and activist who runs the Tehrik-e-Niswan (Women’s Movement) theatre group against going to India to participate in the National School of Drama (NSD) festival, the Bharat Rang Mahotsav, earlier this month.

"At times like these it is all the more important to make the effort and go there, to show that artists and people like us bring goodwill and have the courage to fight these bad feelings," said Kermani.

She took a 17-member group to the festival, making the arduous 18-hour train journey to Lahore in near freezing night-time temperatures, crossing the Wagah border on foot and then taking a bus to New Delhi. Still, "it was a wonderful experience, we got a standing ovation, and so many people thanked us for coming".

Tehrik-e-Niswan performed the powerful ‘Jinnay Lahore Nahin Vekhiya’ (One who has Not Seen Lahore) on Jan. 11 in New Delhi. Written by the Indian playwright Asghar Wajahat, the play was made famous by iconic Indian theatre director Habib Tanvir when he first directed it in 1989.

The play is based in an old house in Lahore allotted to Muslim migrants from India after Independence and Partition in 1947. After the actual house-owner, an old Hindu woman, emerges and refuses to leave, the initially antagonistic family develops a relationship with her. Tension mounts when local goons try to whip up sentiment against the woman on the basis of her religion.

Tehrik first staged the play in November 2007 in Pakistan where audiences appreciated its relevance in terms of how certain sections of society continue to misuse religion for political purposes, giving rise to an increasing culture of intolerance.

The NSD had invited noted theatre director and actor Salman Shahid from Lahore with two plays, but his group was unable to make the trip "due to logistical and organisational problems rather than Indo-Pak tensions," NSD director Anuradha Kapoor told journalists.

Another woman-headed group from Lahore, Ajoka Theatre, run by the feisty Madeeha Gauhar, filled the gap with "Hotel Mohenjodaro", based on a prescient 1967 short story by the gifted Pakistani short story writer, the late Ghulam Abbas.

Abbas’ futuristic four-decade old story (written before the U.S. astronaut Neil Armstrong became the first man on the moon) opens with a celebration at the fictional Hotel Mohenjodaro as Pakistan becomes the first country to send a man to the moon. Mullahs (Muslim priests) condemn the astronaut as a heretic and whip up a frenzy that topples the government.

They take over power and ban music, art, English, and modern inventions, destroy universities, schools and libraries and impose gender segregation. When their infighting leads to anarchy, a neighboring country invades. Years later, a tour guide points to the spot in a desert "where, before the enemy struck, stood the hotel Mohenjodaro with its 71 storeys."

Pakistani audiences who saw Ajoka’s adaptation of the story last year were struck by its relevance to the current situation, first with the Taliban in Afghanistan and now with such elements overrunning Pakistan’s northern areas and mirroring what the fictional mullahs of Abbas’ short story did in terms of brutalising society.

Reactionary elements here regularly accuse Kermani and Gauhar along with other theatre activists, of being ‘anti-national’ and ‘anti-religion’. In India too, their groups performed under threat from extremist elements there.

Kapoor told journalists that the NSD had received threats for including the Pakistani plays in its repertoire. Both groups decided to take the risk, performing under tight security "reminiscent of a visit by a head of state", as one journalist put it. "…Yet not a complaint could be heard" (‘Harmonies of dissonance at Bharat Rang Mahotsav’, Anjana Rajan, The Hindu, Jan. 16).

"I told her (Kapoor) that we receive many threats here in Pakistan too. We face them, and we are ready to face such threats in India. We cannot be deterred by them," said Gauhar.

"Not going would amount to giving in to the pressure by extremists on both sides," Kermani told IPS. "When there is a fight in the family, you stop talking to each other but then you come back and talk."

"India’s cricket tour of Pakistan may be off, but the presence of the two groups affirms that cultural dialogue has survived despite the current diplomatic freeze," wrote another reporter (‘Across the Border, Dipanita Nath, The Indian Express, Jan. 11').

However, the city government in Lucknow, where the Tehrik play was to be performed as part of the festival repertoire, said it could not guarantee security to the group. "Local elections are coming up, and they were jittery," shrugged Kermani, taking the cancellation in her stride. "But the Delhi experience was so wonderful that it’s okay we could not go to Lucknow."

In Lahore, another committed woman peace-maker is attempting to do her bit to counter hostilities between the South Asian neighbours.

Two days after the Mumbai attacks, Syeda Diep, who heads the Institute for Peace and Secular studies (www.peaceandsecularstudies.org) was among the 25-30 people who gathered in front of the Lahore Press Club to express solidarity with Mumbai.

"We held another slightly larger protest a few days later," says Diep, "and then a third which was better attended with maybe a hundred people."

The group held a meeting on Jan. 2, attended by a cross-section of society – teachers, journalists, activists, students and others – aimed at launching "a bigger front along the lines of the big anti-war groups elsewhere," said Diep. "Yes, they weren’t able to stop war, but they did raise a voice and make an impact on society, and today Obama is President."

The resulting Aman Tehreek (Peace Movement) describes itself as a broad-based citizens' alliance working for the restoration of peace and security in our troubled region. Their first event will be a peace rally on Jan. 31 in Lahore, Diep told IPS over the phone as she headed for an organisational meeting for the rally.

Already an Aman Karwan (Peace Caravan), consisting of leading politicians, civil rights activists and journalists from Pakistan, is in India shoring up ties between the two countries.

Meeting over Thursday and Friday members of the 20-member delegation emphasised that Pakistan was as much a victim of terrorism as India. ‘’We are seeing the Taliban demolishing schools and preventing our girls from going to school. Who do we turn to?’’ said Haji Muhammed Adeel, a leader of the Awami National Party.

Asma Jahangir, chairperson of the independent Human Rights Commission of Pakistan, spoke of the difficulties faced by people trying to build peace. ‘’I have been slapped by an army officer and abused for trying to bring about peace between the two nations,’’ she told Ranjit Devraj, IPS correspondent in New Delhi.

Organised by South Asians for Human Rights (SAHR) and the South Asian Free Media Association (SAFMA), members of the Peace Caravan hope to soothe relations between the neighbours, strained by the Mumbai attacks through increased civil society engagement.

"The peace delegations to India are very positive steps," Diep said. "But we want people from India to come to Pakistan too, and join us to condemn the media for its very negative role in fanning hostilities,’’ she said.