MOROCOCHA, Peru, Jan 7 2009 (IPS) - A four-hour drive from the Peruvian capital, the town of Morococha (“coloured lake” in the Quechua language) is a living example of what the mining industry has brought to many poor rural villages and towns in this country. 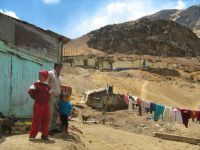 Mateo Rojas and his family live at the foot of Toromocho mountain. Credit: Milagros Salazar/IPS.

The town’s high school stadium is located on top of toxic mining debris, most people have no bathrooms in their homes and receive piped water only an hour a day, and the community washing areas use contaminated water.

Everything in this town in the central highlands region of Junín revolves around the activities of three small mining companies that in a few years will be overshadowed by a larger firm: Chinalco, a Chinese company that plans to extract copper from an open-pit mine that will operate over an area of three square kilometres that is now covered by houses.

The relocation of Morococha, which was officially incorporated 101 years ago, is inevitable. Chinalco must cover the costs of the resettlement, under an agreement signed with the government in 2007, when it obtained a mining concession that had previously been held by the Canada-based Peru Copper.

More than 1,300 families will have to be relocated to allow Chinalco to begin mining for copper and molybdenum on schedule, in 2012.

Although relocation is seen by virtually everyone as a chance to improve living conditions, the company, local residents and the government have failed to agree on the way the process should be carried out.

A group of local residents who do not own their own homes and thus want to negotiate the resettlement as soon as possible, have reached a preliminary agreement with Chinalco.

But an association of property owners, who feel they have a greater claim to their land, are not willing to accept just any price for their homes, which will be demolished to make way for the open-pit mine.

“No one is against private investment or the relocation of the local population,” Morococha mayor Marcial Salomé told IPS. “But first the company must sit down to talks, to sign an agreement that gives us greater benefits.”

Salomé and representatives of 28 social organisations are demanding that Chinalco pay the town 150 million dollars in compensation and increase royalties from 0.51 to three percent of the value of the minerals it extracts.

“We want to ensure the future for the new generations,” said Salomé.

The president of the association of property owners, Johnny Frías, said “it is not a question of handing over our land at just any price. Just as the state puts a value on the natural resources that are underground, they should put a price on our houses. The town should not agree to move unless better conditions are obtained.”

In response to a question from IPS as to whether that was a very high price, even higher than what is found in any residential area in Lima, he said “At least it would serve as a starting-point for negotiations.”

“We take into consideration the price of land in the area and the World Bank’s resettlement policy, which states that each home to be demolished must be paid for and that the cost of building new homes must be covered,” Sarmiento told IPS.

The company will invest 40 million dollars to build 1,200 housing units in the new Morococha, he added.

Meanwhile, the Morococha housing association, made up mainly of tenants, is making progress in its negotiations with Chinalco. “We want the company to move us away as soon as possible, there is so much pollution here,” said the president of the association, Máximo Camarena. “How can we live like this, just a few hours away from the national capital?”

“We represent most of the people who will be relocated,” said Camarena, while describing the conditions in the most severely affected areas of Morococha, like the high school sports field, where murky mineral waste-tainted water seeps up to the surface.

Although most of the town’s streets are paved, basic services are of poor quality in Morococha, where most local residents use community toilets, because their homes do not have indoor plumbing.

The mayor said his administration has installed sewage pipes along the front of people’s houses, and that it is up to each family to connect their home to the system.

“I agree that people have to leave this place, because the water is very bad, it’s murky,” said Mateo Rojas, who lives with his children and grandchildren in a wooden house with a rusty corrugated iron roof at the foot of Toromocho mountain, the source of the area’s mineral wealth.

There is only one hour a day of piped water in Rojas’ home, from 6:00 to 7:00 AM. But the mining companies have water round the clock.

The situation is even worse for workers at the Austria Duvaz and Argentum mining companies, who only receive water from trucks three times a week, delivered to their small four-by-five metre rooms in Old Morococha.

Behind their crowded housing is Austria Duvaz’s Puquiococha waste dump. The wind carries mineral particles to the nearby houses and school.

The school’s principal, Máximo Alcántara, told IPS that at least 35 of the 135 students have skin problems like rashes, which he attributes to toxic substances.

Children are most vulnerable to pollution, because they play on the ground and in the dirt, like Waldir, John, Manuel and Javier, four little boys around four or five years old who are running around at the edge of the heap of mining waste.

He said 45 percent of local children are chronically malnourished and that a study to determine whether they suffer from lead poisoning is pending.

The communal sinks where the women wash their families’ clothes operate with contaminated water – “copper water,” complains Norma Camarena, Máximo’s wife. But residents have no choice but to wash there and to wear the clothes impregnated with minerals and toxic substances.

The mayor promised that in two months, Morococha will have a plant to treat the water drawn from San Antonio lake, financed by the “canon minero” tax paid by the mining companies, which has brought the local administration large sums of money in the last few years due to the high minerals prices.

In 2003 and 2004, Morococha received 133,000 dollars from the canon minero, compared to 1.6 million dollars in 2008. In addition, the district received a one million dollar social fund in 2003, when Peru Copper signed an agreement with the local authorities to start operations.

But so far, none of the funds have been used, and only seven projects – with a combined price tag of 200,000 dollars – have been approved, although they have not been implemented due to bureaucratic hurdles thrown up by the central government, according to local officials.

“Life is tough here, and there is a lot to be done. But there is a lack of awareness among the local people, because when we complain to the companies about the pollution, the workers protest, saying that I am trying to close down the mine,” said Salomé.

The mayor himself left his job as a teacher in Huancayo, the capital of Junín, to become a miner in Morococha, where he held different posts as a local leader. Today he is still officially an employee of Austria Duvaz, but is on leave until his term as mayor ends.

“Becoming a local official cost me a lot, and I have to guarantee that the rights of the population are respected in the relocation process. But in order for that to happen, Chinalco should sit down and talk with all of the social organisations,” said Salomé.

Sarmiento said that in July, Chinalco attempted to hold a dialogue with the representative of the regional government’s ombudsman’s office, among others, but that the mayor insisted that the talks include the leaders of the 28 organisations that make up the committee created by the municipal government to deal with the relocation process.

“It’s possible to talk to eight representative leaders, but not with so many people. You can’t negotiate that way,” said Sarmiento.

Although the relocation talks have come to a standstill, the company has already purchased 72 percent of the housing units in the districts in question, and continues moving forward with its plans.