SANTIAGO, Feb 23 2009 (IPS) - “They burst in aiming machine guns at us. They found him in the hallway, they grabbed him by the hair, they threw him on the floor and they beat him up,” Ida Huenulef told IPS, describing the arrest of her son Miguel, the first indigenous Mapuche activist to be charged under the Anti-Terrorist Law by the government of Chilean President Michelle Bachelet. 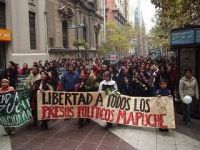 Protest march for the freedom of Mapuche prisoners. Credit:

Members of his family said that 11 members of the special forces and “carabineros” (national police) raided their home in the district of Lo Prado in the west of Santiago, without showing any identification or producing a search warrant.

Miguel Tapia Huenulef was arrested in front of his entire family, who were held at gunpoint and intimidated during the violent operation in the middle of the night of Feb. 11.

“I went to get my daughter and they pointed a machinegun at her head, and when she picked up her little daughter, another carabinero came and pointed his weapon at her little head,” said Ida Huenulef, describing how the police treated her 20-day-old baby granddaughter.

Miguel Tapia Huenulef, 45, was arrested as a suspect in an arson attempt perpetrated in January on an estate called San Leandro near the town of Lautaro, in the region of Araucanía, over 600 kilometres south of Santiago.

He was also wanted for his alleged involvement in an attack on the Public Defender’s Office in Temuco, the capital of Araucanía, in December 2008.

Rural Araucanía is the heartland of the territory claimed by the Mapuche as their traditional land and is the centre of indigenous activism. (The word Mapuche itself translates as “the People of the Land.”)

The police reported finding weapons, including a nine-millimetre submachine gun with two ammunition clips, as well as ingredients for making bombs and several marihuana plants.

The Tapia Huenulef family and Mapuche organisations say Huenulef is being harassed, and the weapons discovery was a staged event designed to incriminate him, just because he is an indigenous person.

“No, nothing at all, nothing of the sort. They say my children had assault weapons, what do you think, who would do such a thing, living with their family and with children in the house, and keep weapons in the home!” Miguel’s mother exclaimed.

She added that the police did not find anything in the bedroom, “because they left, the carabineros went away without having found a thing. And later on I saw people passing by carrying backpacks and other luggage.”

Enrique Antileo, a spokesman for the indigenous organisation Meli Wixán Mapu (“The Four Corners of the Earth” in the Mapuche language, Mapuzungun), told IPS that the raid on the house is an example of the repressive policies of the authorities.

“It was a set-up, they planted the weapons, we can swear to that. We will support the family through thick and thin. This is the continuation of a policy to repress the Mapuche social movement,” Antileo said.

Interior Minister Edmundo Pérez Yoma told the press that the case had all the hallmarks of a terrorist organisation, “consequently we are going to apply all the appropriate measures; in fact, we are going to invoke the Anti-Terrorist Law.”

A week after his arrest, the Tapia Huenulef family had still not seen Miguel, who was being held incommunicado and had been transferred to the Araucania region, they were told by the authorities. They were not aware of the Interior Minister’s statements.

The Under-Secretariat of the Interior and the regional government of Araucanía told IPS that a criminal prosecution under the Anti-Terrorist Law, signed by Under-Secretary Patricio Rosende, had indeed been presented in court, but they declined to comment further.

This is the first time the administration of socialist President Bachelet has used the Anti-Terrorist Law against a Mapuche. The controversial law was created during the military dictatorship under Augusto Pinochet (1973-1990) in order to hound political opponents. It extends the powers of the police and the justice system.

“During her electoral campaign, (Bachelet) promised not to use this law in cases involving members of the Mapuche people,” said Rodolfo Valdivia, the co-director of the Observatory on the Rights of Indigenous Peoples (ODPI).

“We are not surprised that the Bachelet administration, in collusion with powerful economic interests, should resort to arbitrary laws to try to contain the Mapuche protest movement,” Antileo said.

The Anti-Terrorist Law is one of the legacies of the dictatorship drawing the heaviest criticism from indigenous organisations and human rights groups.

In recent years, the Chilean state has received recommendations for reviewing its legislation and policies in relation to the demands of the Mapuche people from a number of bodies, such as Amnesty International, ODPI, and the United Nations Special Rapporteur on the situation of human rights and fundamental freedoms of Indigenous People, Rodolfo Stavenhagen.

“There is a growing trend to criminalise Mapuche protests in general. The Mapuche people, when they protest, have historically been silenced in the most violent ways imaginable,” Valdivia said.

The government denies harassment, and does not acknowledge the existence of Mapuche political prisoners, as indigenous organisations allege. Human rights observers take the opposite view.

“From the point of view of human rights, of course there are (political prisoners). They are in jail because of their way of thinking, because they want autonomy and want the autonomy of the Mapuche people to be recognised,” Valdivia said.

Activists recognise and appreciate the steps Bachelet has taken toward securing constitutional recognition of Chile as a multicultural state, and the many education and health initiatives that benefit original peoples.

But the government’s response to the historical demands of the Mapuche people, including their territorial claims, remains lukewarm. Their demand for autonomy – recognition not only as a particular culture within the country, but as a Mapuche nation with political and territorial rights – is disregarded, and when conflicts arise they are treated by the justice system as criminals.

According to the Meli Wixán Mapu organisation, more than 40 indigenous people are imprisoned, either pending trial or following conviction in cases related to their collective demands. About 500 Mapuche have been prosecuted since the country’s return to democracy in 1990. In the organisation’s eyes, they are political prisoners.

“They are not criminals, they have not committed armed robbery or rape or anything like that. All they have done is take action within the framework of our people’s movement to reclaim our rights,” Antileo said.

In Valdivia’s view, the recent acquittal by a court of Avelino Meñaco, a “lonko” (traditional Mapuche authority) from the Pascual Koña community, illustrates the flimsy grounds of the practice of bringing criminal charges against Mapuche activists.

After eight months in jail, Meñaco was acquitted of the charge of attempting to set fire to a lakeside cabin, thanks to expert defence by lawyer and former judge Juan Guzmán, famed as the first judge to prosecute Pinochet on human rights charges upon the former dictator’s return to Chile after over a year of house arrest in London.

“There is evidence of a certain amount of persecution, because the authorities are seeking criminal convictions against Mapuche ‘lonkos’ and leaders. But as soon as the criminal justice system takes over, it finds that there is no proof on which to convict them, and so in several cases they have been declared innocent,” said Valdivia.

According to the 2006 National Socio-Economic Characterisation Survey, 1,060,786 people, equivalent to 6.6 percent of the Chilean population, identified themselves as indigenous people. Of these, 19 percent had incomes below the poverty line, that is, they were officially regarded as poor or extremely poor. The Mapuche make up 87 percent of the country’s indigenous people.