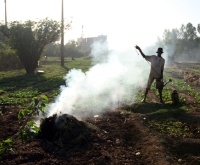 "It is not necessarily about producing more food, but about producing more quality nutrition through less energy use and pollution," declared Hans Herren president of the Washington DC-based Millennium Institute, a non-profit organisation promoting long-term, integrated, global thinking.

"We have to invest heavily into research on how to increase eco-agricultural production."

The best way to mitigate climate change and gain food security is to support small-scale, ecological farming, scientists and economists said during the International Fund for Agricultural Development (IFAD) Governing Council in Rome, Italy, in late February. This would be a turnaround from international agricultural strategies of the past two decades that heavily promote monocropping and the use of biotechnologies.

"Nobody has really thought yet about how and if we can mitigate climate change in agriculture," admitted Dr Josef Schmidhuber, head of the global perspectives study unit at the United Nations Food and Agriculture Organisation (FAO), indicating that although there is a lot of talk about averting the impact of climate change, no policies have been implemented yet to solve the problem.

"It starts and ends with governance, with convincing key decision makers to change strategy," said Herren. "We know what the solutions to climate change are, but they are not put into practice because governments are in bed with the biotechnology industry. They are more interested in making a quick buck than in the long-term benefits of farmers."

Herren believes industrial agriculture is "bankrupt by definition", because it costs too much energy to produce: "For every calorie you produce you have to put in ten, if you look at fuel, fertiliser and labour needed."

He lobbied policymakers to focus on prevention rather than fixing crises: "In agriculture, it takes a long time to rebuild what we destroy. It takes years to replenish soils and re-create diversity. We have to go back to the source and ensure that healthy soils grow healthy crops."

"For small-scale farmers, water is far more important than having a pest-resistant, genetically modified plant, which is only resistant to one particular type of pest anyway," he said.

Downward spiral Agriculture is the main income source for poor rural people in the developing world. At the same time, it is the human activity most directly affected by climate change.

Climate change will affect smallholder farmers (who own less than two hectares of land) through increased crop failure, a rise in diseases and mortality of livestock, increased livelihood insecurity resulting in assets being sold, indebtedness, migration and dependency on food aid. Other consequences will be desertification and land degradation, rising sea levels causing floods, diminishing natural resource productivity and, in some areas, irreversible loss of biodiversity.

Climate change is expected to put 49 million additional people at risk of hunger by 2020, and 132 million by 2050, according to IFAD. In sub-Saharan Africa, an additional 17 to 50 million people could be undernourished in the second half of the century due to climate change.

Generally speaking, climate change is expected to lead to a downward spiral in human development indicators, such as health and education, especially in sub-Saharan Africa.

"To feed the world, we will have to scale up productivity, but in an ecological way, by polluting less and making use of low-cost technologies," said Michel Griffon, executive director of the National Research Agency of France. "We need a holistic approach to the entire ecosystem, including soil, water, plants, animal management, pests and diseases. It will be an immense challenge."

One of the key consequences of climate change is changing rainfall patterns. This will particularly affect African countries where 95 percent of cultivated land is rain-fed. "Less than ten percent of cultivated land is irrigated and only 20 percent is irrigable," explained Ides de Willebois, director of IFAD’s Eastern and Southern Africa division.

In Africa alone, between 75 million and 250 million people will be exposed to increased water stress caused by climate change by 2020. Since the 1960s, the Sahel region has had a 25 percent decline in rainfall.

If farmers carry on with "business as usual", productivity could decline between ten percent and 25 percent by 2020, predicts Herren. In some countries, the yields in rain-fed agriculture could even be halved, he believes. "Such trends clearly threaten the achievement of the MDGs. We need new thinking to tackle old problems."

Since rural people in developing countries manage vast areas of land and forest, they could be important players in natural resource management. "Climate change will affect us for the next 30 years, even if we take good measures now, so we do need efficient adaptation plans," said Asian Farmers Association secretary general Estrella Penunia.

"Policymakers need to re-direct investments to small-scale, ecological, diversified farming," she advocated. "Smallholders will be most affected by climate change, yet they are the ones most likely to use sustainable farming methods, such as diversification and inter-cropping."

Agricultural experts at IFAD advise farmers to adapt to climate change by altering timing and location of cropping activities and to utilise water management to prevent water-logging, erosion and nutrient leaching in areas where there is an increase in rainfall. Farmers should also ‘harvest’ water in areas with less rainfall to conserve soil moisture and use water more efficiently.

In addition, farmers should diversify their income though additional activities, such as livestock raising, and use seasonal climate forecasting to reduce production risks. Other strategies include soil conservation, incentives for sustainable production practices and payment for carbon reduction and avoided deforestation.

"We need to find solutions to reduce risks and create more safety nets for smallholder farmers," explained Herren. "A most important move would be to increase crop diversity (and move away from mono-cropping) to diminish the risk of crop failure through variety."

Resilience against climate change goes down with less plant variety, Herren explained, "because if one invader or disease attacks a mono-crop, everything gets destroyed".

He also believes that transgenic plants do not produce a higher yield per hectare than natural plants: "They might produce more efficiently, but gains are nullified because farmers have to pay more for their seeds and buy them every year (because the seeds of genetically modified plants cannot be saved)."