SRINAGAR, Feb 5 2009 (IPS) - Decades of separatist militancy in Indian Kashmir and the massive response to it by the armed forces have taken a toll on human life. But, what is less known is the fact that this and other human activity have exacerbated dangers posed to the state’s wildlife. 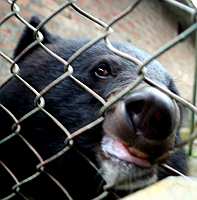 "Every now and then we receive reports of attacks by wild animals causing death, injuries (sometimes serious) to human beings and livestock. Over the last three years 49 people and 404 animals have died in these conflicts,'' Inayati said.

But, in that period, more than 200 wild animals were also rescued and released into the wild by staff of the wildlife department who intervened in potential conflict situations.

"Animals are often get killed, captured or are harmed in retaliation and these conflicts are a major threat to the continued survival of many species," A. K. Srivastava, chief wildlife warden of the region, reported to the government recently.

In the winter of 2006 a frenzied mob burnt a bear to death in a hamlet of Kashmir's Tral township. Over the last few years there have been many such incidents where people have tried to capture the animals or kill them.

This despite the fact that killing the Asian black bear, which has been declared an endangered species under the Indian Wildlife Act, carries a prison sentence of 2-6 years.

Srivastava believes that the steadily decreasing forest cover, a result of legal and illegal logging operations and human encroachments into the forest, is a direct cause for increasing encounters between humans and animals.

Since the start of the armed insurgency in Kashmir in 1989, the central government has massively boosted the presence of army and paramilitary forces which are mostly deployed in the forest areas, particularly along the fenced Line of Control (LoC) that divides Indian Kashmir from the Pakistan-administered part of the territory.

"The conflict between the military and the militants in Kashmir is indirectly contributing to the increase in the number of man-animal conflicts,’’ a forest official who cannot be identified because of briefing rules told IPS.

"Due to human movement in the forests and the fencing of the LoC, the natural habitat of the wild animals has got disturbed; this is one of the reasons that they stray into human settlements,’’ he said.

Unofficial figures put the number of army and paramilitary troops deployed in the state at around one million, but the government disputes this figure saying it is "far smaller than that’’.

The army and paramilitary have set up camps in the forest areas where they believe militants often take refuge. "Presently there are over 671 security camps in Kashmir which occupy more than 90,000 acres of land," says rights activist Gautam Navlakha.

Following a ceasefire agreement with Pakistan in 2003, India erected a patrolled, security fence along the 742-km-long LoC.

India accuses Pakistan of training Kashmiri militants on its side of the LoC and pushing them into Indian Kashmir. "The fence may have stopped the militants from crossing over to this side of LoC, but it has had an impact on the natural habitat of wild animals in the process," says the forest official.

"There are several other factors also responsible for increasing incidents of conflict between wild animals and humans. These include shrinkage of habitat due to expanding human population, livestock and developmental activities, changes in the land-use pattern, decline in the natural prey base, climate change and urbanisation," says Abdul Rouf Zargar, a wildlife warden.

According to Zargar, wild animals endangered by conflict with humans include the Asiatic Black Bear, Common Leopard, Rhesus Monkey and Langur.

Kashmir is home to several animal species that are listed as endangered like the Kashmiri red stag called 'Hangul' and the Snow Leopard (also called ounce). Hanguls were once a major attraction in the mountain-ringed forests of Dachigam near Srinagar, summer capital of Kashmir.

The Hangul is the only surviving sub-species of the red deer family in the world, and after its population declined to about 150, the wildlife department began, this year, a programme of captive breeding to save it from extinction.

Efforts by the wildlife department to save the Snow Leopard, listed as 'endangered' in the IUCN (International Conservation Union) red list of threatened animals, include helping sheep and goat farmers to build better barricades and shelters for livestock.

While the Snow Leopard rarely attacks humans, its predatory habits lead them into livestock shelters, entering through ventilators or broken doors and windows. Here they are often trapped and killed.

Wildlife authorities have issued advisories to the citizens to try and minimise chances of conflict with the wild animals and have supplemented it with a number of guidelines for them to follow.

"We cannot stop these incidents entirely, but we are making efforts to minimise them," says Inayati. "We have taken a number of measures like the constitution of coordination committees, comprehensive management plan for handling the conflicts, and research studies on conflicts and animals involved."

"We captured one aggressive bear a couple of months ago and kept it under semi-captivity at Dachigam National Park. We released it to study its behavioural pattern of this animal using the radio collar and then recaptured it when it started attacking humans again," Suhail told IPS.

"Now we will subject him to the ‘aversion technique’ by which animals are subjected to unpleasant stimulus so that it avoids human populations and stays in the forest areas,’’ he said.