ANTANANARIVO, Feb 2 2009 (IPS) - "The capital has never known such stillness," Marie Ratonvonirina said of the one-day stayaway declared by the mayor of Antannanarivo, Andry Rajoelina, on Jan. 29. 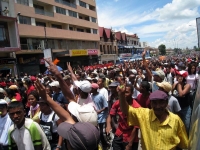 The work stoppage was a shift in tactics for the 34-year-old mayor who later declared himself to be in control of Madagascar.

Ratovonirina, a grocer in downtown Antannanarivo, told IPS she closed her shop up early for want of customers. The stayaway was a lull in a week of heightened political tension in Madagascar, during which 100 people have died – 60 in the capital alone – according to an official statement from the national police.

The deaths were recorded during two bloody days of protest marked by the burning and looting of shops in many cities across the island.

In the capital, which had the highest death toll, most of those killed were trapped in fires set at 23 commercial centres. "We found 39 bodies under the debris in one centre," said Colonel Jaona Andrianaivo, head of the fire service in Madagascan capital.

Toamasina, the principal town in the east of the country, counted 36 dead while Toliara, in the south, recorded 19. Two further deaths were recorded at Sambava, a city in the northeast.

The deadly conflicts followed a general strike organised on Jan. 26 by Rajoelina and his supporters. They have denounced a lack of freedom of expression and accused the government of being dictatorial.

Radio stations perceived to take the mayor's side, as well as Rajoelina's own television station Viva TV, were closed down, unleashing the anger of residents of the capital. The anger boiled over into the torching of state-owned broadcast stations as well as private outlets belonging to the president Marc Ravalomanana.

Visiting the scene of the destruction on Jan. 28, the head of state promised to rebuild the damage. "I will send Air Force One to South Africa to bring back all necessary materials," he declared to journalists.

However, another of his declarations surprised everyone. "Two arrest warrants have been issued, against Rolland Ratsiraka, the former mayor of Toamasina and General Dollin Rasolosoa, private secretary to Rajoelina. They are the source of this tension," he insisted, without mentioning the role played by the mayor himself.

From his side, the mayor rejected the president's declaration, insisting that individuals were paid to foment trouble in the capital. "We will resume our demonstrations on Jan. 30," he added.

Diplomats launched an appeal for dialogue in a communiqué read to the press on Jan. 27, and which they repeated the following day, stressing that the international community regretted the lack of dialogue in the face of such damage to lives and property. "We remain concerned by the situation."

Ahead of the return of the mayor and his supporters to the May 13 Plaza, life crept back into the streets of the capital. But for many poor households, the events of recent days have imposed hardship, with basic foodstuffs in short supply.

Terna Gyuse adds from Cape Town: Perhaps unable to sustain protest actions against an urgent need to work, increasing numbers of residents of the capital returned to their normal lives Feb. 2.

Rajoelina boldly declared himself to be taking over national affairs on Jan. 31, and his supporters submitted a letter to Madagascar's High Constitutional Court asking it to consider removing Ravalomanana as head of state.

However, Madagascar's constitution however specifies that only the Senate and parliament can begin an impeachment process against the president – unlikely, as Ravalomanana's party holds a majority.

U.N. Secretary General Ban Ki-Moon added his voice to calls from the African Union to all parties to resolve the political dispute peacefully and through constitutional means.