KUALA LUMPUR, Feb 6 2009 (IPS) - The death of a youth in police custody and the torture of another in a police lockup, in recent weeks, have shocked Malaysians and revived calls for an oversight body – proposed in 2006 by a royal commission but unimplemented because of opposition from senior officers in the command. 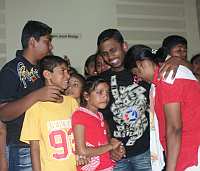 Kugan Ananthan, 22, died on Jan. 20 after being held for five days in the Taipan police station in Subang Jaya in west Malaysia.

Police claimed that Kugan had died of "breathing difficulties" but a group of 50 people, including members of Kugan’s family, stormed the mortuary where Kugan's body was taken for a post-mortem. Some took photographs of his body, showing signs of injury, and had them published on the Internet.

In early January another youth, B. Prabakar, had emerged out of a police lockup in the Brickfields suburb of the capital showing the public his chest scalded from neck to waist with the skin peeling off. He accused the police of beating him and scalding him with hot water to extract a confession for crimes he said he did not commit.

Seven police officers have pleaded not guilty, after being charged at Kuala Lumpur sessions court on Jan. 15 with committing an act of "criminal intimidation" and "voluntarily causing hurt to extort confession".

According to statistics revealed in parliament last year, there were a total of 1,535 custodial deaths in the country between 2003 and 2007, figures which included death from diseases like HIV/AIDS.

Between 2000 and 2004, 80 persons in police custody had died, parliament was told last year. Only 39 cases of these were referred to a magistrate for inquiry and inquests were held only on six cases.

Beyond these bare facts no in-depth study has been carried out about deaths in police custody.

"It’s like dropping into a big black hole once arrested…increasingly the one way to come out is in a coffin," opposition lawmaker S. Manikavasagam told IPS. "We need to shine light over the entire process, to make everything transparent and above board."

"We are determined that this should be the last case of death under custody…there should not be one more ever. The people can’t tolerate this type of murder any longer," said Ramasamy Palanisamy, opposition legislator and deputy chief minister of the opposition-ruled Penang state.

"We must have a permanent solution to this dilemma of youths getting tortured and beaten to death," he told IPS. "The world is watching us.’’

Both victims of police brutality are Tamils, members of a marginalised minority who make up about eight percent of the population but are blamed for at least 40 percent of thefts, robberies, gang wars and violent crimes in the country.

In some localities where Tamils predominate police statistics show their rate of involvement in crime is over 50 percent, indicating serious marginalisation from mainstream socio-economic improvements and alienation.

"There is nobody to guard the innocent from the excesses of the police," Charles Santiago, opposition lawmaker told IPS. "Any solution has to be multilevel from providing opportunities to minority Indians to advance socio-economically to alleviating their poverty and curbing and seriously punishing police excesses."

Responding to criticism, the attorney general has pressed charges against lower rank personnel for causing grievous hurt by use of "boiling water" to extract a confession. Founded by the British colonial authorities in the 18th century, the police force was a key institution of law and order that survived the two World Wars and performed admirably defeating a communist insurgency and deftly handling race riots.

However, observers say the police force went to seed during the 22-year autocratic rule of former premier Dr. Mahathir Mohamad who gave the force a free hand as long as it served him and went after his political enemies.

By the time Mahathir’s successor Abdullah Badawi formed the royal commission, some opposition lawmakers felt the force was beyond redemption and that a new force needed to be created from ground up.

The commission recommended numerous changes and many of them were carried out, including better pay, housing, training, new equipment and other service perks but the key change – to form an independent oversight commission – remained unborn.

Abdullah introduced a watered down version of the commission last year but was forced to withdraw it following widespread protests.

The non-implementation of the recommendations ‘’demonstrates a lack of commitment on the part of the Malaysian government to bring about reform and to establish compliance with human rights standards as a norm in policing work in Malaysia,’’ Amnesty International said in a statement, following the death of Kugan.