JUBA, Feb 26 2009 (IPS) - "The liberation struggle is over. Why are we still killing ourselves?" South Sudan's President Salva Kiir asked a meeting of chiefs, exasperation clear in his usually even-toned voice. 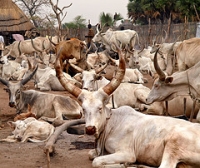 Kook Mawein - 'Cows are wealth, social status, the source of food and are central in the culture.' Credit: Ellen S. Morgan

On one level, the answer is cows. Thousands of rural people have been killed in vicious cycles of raids and counter-raids over cattle between different pastoralist tribes and clans since Sudan's 2005 north-south peace deal.

During the dry season, stories of attacks reach the south's capital Juba every week. Officials know they don't hear of all the incidents but even so are so used to grisly news, reports of ten or 20 dead barely make a ripple.

Sometimes the numbers are higher: once or twice a year as many as 50 or 100 people are slaughtered in a single shoot-out. Huts are burned to the ground and entire herds driven away, leaving behind destitution.

"If you add up death and injury tolls, a lot of research institutions would call this a war," James Bevan from the Small Arms Survey said.

As Kiir spoke in far-flung Warrap State, in the shade of a mango tree nearby, the bloody head of a white bull rested against one horn, eyes rolled back: a leftover from an inter-clan peace ceremony. There have been countless similar deals, often violated within days.

The insecurity stymies development in rural areas: children can't go to school; and NGOs abandon clinics. The U.N. counted tens of thousands displaced by cattle raiding; people who will often lose what crops they planted and – as in wartime – become dependent on food aid. The U.N. situation report for mid-February registered 25,613 people displaced by inter-tribal fighting in recent months.

Fear of raids has made disarmament extremely difficult for the semi-autonomous South's government, set up after the peace accord. And perhaps most worrying, a belief peace has not set in.

During the long north-south war, much of the worst fighting was between the southern rebels and militia groups also from the south, but armed and funded by Khartoum. Relations between different ethnic groups, often competing over resources, remain strained, weakening southern solidarity.

Kiir angrily told community leaders that this new cattle raiding would have deeply shamed his parents' generation. "In those days, thieves would have been rejected," he said.

Post-war everyone is trying to grab anything available, including, he warned, ambitious elites who come "at night like shadows" to manipulate the rural people that are their ethnic power base.

"Cows are wealth, social status, the source of food and are central in the culture," Kook Mawein, a former refugee, who recently returned to his pastoralist homeland from the U.S. "And you need them to get married, for bride price."

When young boys from the south's pastoralist tribes are weaned, they are put in the cattle camp, often together with a particular milk cow, forming a lifelong bond with the beasts.

Cowherd Deng Thon spends the last half hour of daylight cleaning dung from the area around his beloved white bull that nonchalantly chewed cud at dusk. He works close the ground, sweeping with his hands.

Thon cannot really imagine another way of life but agreed that perhaps he could be a businessman. If he made money he could buy more cows, he explained. But the shadow of war is dark on this passion for the animals.

"All they know is war, they were born into it," Mawein said. He is hoping to use his American education to bring new ideas to his community like farming some of the – as he points out wholly organic – cows for meat production.

But until there's a true belief in long-term peace, he thinks change will be slow. "You can take your cows with you if you run from the war, but not a house or a business, or a job," Mawein explained.

Because so few will sell cows for meat, they bring in as much as $250 – $500 a beast in Warrap's small towns. Millions are grazed across the south's wetlands: probably more than the south's population. In the war-destroyed and poverty-stricken south they represent vast wealth but few are willing yet to cash them in.

Chief Madut Aguer Adel's community has had thousands of cows stolen by raiding neighbours. Without their cows, youth are leaving for towns.

"Some are waiters in the hotels. It is a waste," he said, adding that without their cattle his young men cannot provide dowries and so "do not marry properly".

The only hope is that the south's government will disarm the communities in neighboring states that are attacking his own. Adel's community was disarmed last year, but others around his area were not, leaving his cattle extra vulnerable.

But so far, wide-reaching attempts have failed and thousands have been killed in battles between communities and the south's army that some communities simply don't trust. Guns quickly re-enter the South through its porous borders, from Ethiopia and northern Kenya and Uganda.

In 2011, Southerners will get a longed-for chance to vote on whether they want independence from Khartoum. Most say they will vote for separation. But with less than two years to go, the intensity of inter-ethnic rivalries is beginning to make some worry about what kind of country an independent South would be.

A lack of clear legislation, courts and lawyers means there's often no recourse to justice for wrongs done.

Rather than forming part of the solution, the south's security forces – including a weak police and the former rebel army – often abuse their power, a report by the U.S. based Human Rights Watch said.

"Soldiers and other security forces that commit human rights violations and other crimes against civilians are rarely brought to account," the report, which described killings, torture, ex-judicial executions and arbitrary detentions by soldiers, said. The road to safety for these rural communities is long, but they will need to see more real change to achieve the faith needed to make it.