WASHINGTON, Feb 3 2009 (IPS) - Even as U.S. President Barack Obama prepares to deploy more military forces to Afghanistan – what he has called “the central front” in former President George W. Bush’s “global war on terror” – a consensus on overall U.S. strategy there remains elusive. 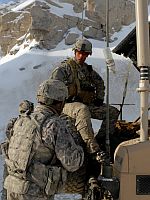 Even Washington’s precise war aims in Afghanistan more than seven years after U.S.-backed forces chased the Taliban out of the country appear subject to continuing debate, as, in the face of what virtually all analysts and officials concede is a deteriorating situation, the Pentagon is actively downgrading the Bush administration’s hopes of ushering in a thriving democracy to something far less ambitious.

That was made abundantly clear last week when Defence Secretary Robert Gates warned Congress “to be very careful about the nature of the goals we set for ourselves in Afghanistan. If we set ourselves the objective of creating some sort of Central Asian Valhalla over there, we will lose, because nobody in the world has that kind of time, patience, and money,” he told the Senate Armed Services Committee.

And while Gates insisted that Washington faces a “long slog” to achieve even its minimal aims, fears that Afghanistan could become a “new Vietnam”, a deadly quagmire in which already overstretched U.S. forces could become bogged down in an unwinnable war, have gained sudden new currency in the mass media.

Indeed, the cover story in the latest edition of ‘Newsweek’ magazine is headlined, “Obama’s Vietnam: The analogy isn’t exact. But the war in Afghanistan is starting to look disturbingly familiar.”

Public statements about the current situation by senior Pentagon officials, including Gates, have been grim. A Pentagon report released Monday noted that last spring and summer saw the “highest levels of violence” since the U.S. intervention in 2001, and that 132 U.S. troops were killed last year, up from 82 in 2007.

“You all have been covering recent events in Afghanistan long enough to know that the situation there grows increasingly perilous every day,” the chairman of the Joint Chiefs of Staff, Adm. Michael Mullen, told foreign reporters at the top of a special briefing here last week.

“Suicide and IED (improvised explosive device) attacks are up, some say as much as 40 percent over the last year,” he went on. “The Taliban grows bolder implanting fear and intimidating the Afghan people, and the flow of militants across the border with Pakistan continues.”

The U.S. has about 33,000 U.S. troops currently deployed to Afghanistan. These are augmented by another 30,000 troops from other NATO countries, of which, however, only British, Canadian, and Dutch contingents are fully cleared for combat in largely Pashtun areas in the east and south where the Taliban and its allies are strongest.

Commanders in the field, led by U.S. Gen. David McKiernan, have requested an additional 30,000 U.S. troops over the next six to nine months, a figure that Mullen echoed during last week’s press briefing.

Gates has taken a more cautious approach, telling senators last week that 10,000 to 12,000 troops – or the two to three brigades that Obama said were necessary during his presidential campaign – are likely to be deployed over the next six months. At the same time, he said he would be “deeply sceptical” of further increases, adding that Washington expected the Afghan military (currently about 100,000 troops) and police to take a stronger role.

The new administration is also hoping that other NATO members, which were repeatedly pressed by the Bush administration for more support, will provide more troops – for both combat and accelerated training of Afghan forces.

Obama is sending a high-powered delegation led by Vice President Joe Biden; Obama’s national security adviser, Gen. James Jones; and his special representative to Afghanistan and Pakistan, former Amb Richard Holbrooke, to Munich next week in the first of a series of international meetings culminating in NATO’s 60th anniversary summit in April in Strasbourg where he hopes to secure new commitments.

But, despite all the goodwill generated abroad by Obama’s election, public opinion both in Canada and Europe is running strongly against new deployments, according to recent surveys there, and analysts here warn that Washington is likely to be disappointed by the response.

Meanwhile, Holbrooke, working with the chief of the U.S. Central Command (Centcom), Gen. David Petraeus, as well as Washington’s new ambassador-designate to Kabul, ret. Gen. Karl Eikenberry, who has served two tours of duty in Afghanistan, will take part in a comprehensive review of U.S. strategy that is unlikely to be concluded before April.

The review is aimed at both defining U.S. short- and long-term goals in Afghanistan and elaborating a strategy to achieve them.

The one goal on which virtually all policy-makers and analysts are agreed is that expressed by Gates during last week’s hearing: “To prevent Afghanistan from being used as a base for terrorists and extremists to attack the United States and its allies.”

But how to achieve even that minimal goal – given obvious constraints on resources and the secure bases that the Taliban continue to enjoy in Pakistan’s frontier areas – remains the subject of considerable debate.

The dominant view for now is that increasing security for the civilian population, particularly in the Pashtun areas where the Taliban is strongest – much as the U.S. “surge” of 30,000 additional U.S. troops purportedly accomplished in Iraq – is essential. Success should deprive the Taliban of much of its popular support and persuade “reconcilable” leaders to negotiate with the government and reduce the level of violence.

In addition, pressure on President Hamid Karzai to address the corruption that has become endemic under his administration and renewed efforts to persuade – in part through significantly enhanced training – the Pakistani military to conduct an effective counter-insurgency campaign against its home-grown Taliban in the frontier areas, as well as the al Qaeda leadership that is based there, are also seen as indispensable.

But critics, of which there are a growing number, are sceptical. Among other things, they question comparisons between Iraq and Afghanistan, noting, among other things, that, even if 30,000 troops are added to the existing deployment in Afghanistan, the ratio of troops – both foreign and indigenous – to people will remain substantially below the ratio in Iraq, and far below the ratio recommended by conventional counter-insurgency doctrine.

There is also disagreement – even within the military itself – over how best to deploy those troops: whether close to the rugged Pakistan border to try to block supply and infiltration routes; or in cities, towns, and villages to provide “security” to the population, as the Surge purportedly did in Iraq.

In a new report released Tuesday by the Carnegie Endowment for International Peace, Gilles Dorronsoro, a French expert on South Asia, argued that adding troops would actually be counter-productive because the mere presence of foreign soldiers in Pashtun areas has fueled the Taliban’s resurgence and that the best way to weaken it is to reduce military confrontations. In that respect, “the only meaningful way to halt the insurgency’s momentum is to start withdrawing troops.”

Indeed, Dorronsoro argues, as do other critics, that most effective way to ensure that Afghan territory is not used as a base to attack the U.S. is to “de-link” the Taliban from al Qaeda, “which is based mostly in Pakistan.”

“We will be in a much better position to fight al Qaeda if we don’t have to fight the Afghans,” he said. “We have to stop fighting the Taliban because it is the wrong enemy.”

*Jim Lobe’s blog on U.S. foreign policy can be read at http://www.ips.org/blog/jimlobe/.