HARARE, Feb 14 2009 (IPS) - His first days as prime minister of Zimbabwe's government of national unity have, as expected, thrown down several challenges to Morgan Tsvangirai of the Movement for Democratic Change. 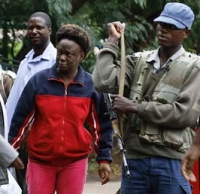 MDC activist Jestina Mukoko has been transferred from prison to a clinic, but remains under guard. Credit: Africa News

His first days as prime minister of Zimbabwe's government of national unity have, as expected, thrown down several challenges to Morgan Tsvangirai of the Movement for Democratic Change.

His pledge to secure release of as many as 30 of his supporters being held by state security has not materialised, and his partners in government, the Zimbabwe African National Unity-Patriotic Front party (ZANU-PF), attempted to swear into office five more ministers than had been agreed.

A three-hour meeting resolved the matter of ministerial posts, with ZANU-PF agreeing to honour the Global Political Agreement under which 15 ministerial posts are to be filled by Zanu-PF, 13 by MDC-Tsvangirai nominees, and three by the MDC faction led by Arthur Mutambara.

But the question of political detainees has only grown more complicated. Since his swearing in, activist Jestina Mukoko has been transferred from prison to a private clinic where she remains under guard. But more than 30 political prisoners are being held in the notorious Chikurubi Maximum Prison on charges ranging from attempting to destabilise Zimbabwe to seeking to oust President Mugabe using violent means.

Alarmingly, MDC-T Treasurer General Roy Bennett – who was to be sworn in as Deputy Minister for Agriculture – was arrested at Harare's Prince Charles airport on Feb. 13 as he boarded a flight for South Africa. According to MDC statements, he was charged with attempting to leave the country illegally; the charge was later changed to treason and as of this writing he was being held at the Mutare police station.

Several MDC officials and supporters were abducted from their homes by state security agents between October and December 2008. After the MDC faction led by Tsvangirai resolved to join a government of national unity, its leader categorically stated that he would not be joining the all-inclusive government unless and until all political prisoners were released.

"We (the MDC-T national council) resolved that all abductees be released unconditionally before the 11th of February," said Tsvangirai on Jan. 30.

Tsvangirai was at pains to reassure about 30,000 supporters who turned up to hear his inaugural address that he would spring the detainees from jail within 24 hours. He also named stabilising the economy as his first priority and pledged to pay soldiers and public sector workers' salaries in foreign currency.

"I am aware there are political prisoners in prison," said Tsvangirai. "I am not happy that they are still locked up. I wanted them to be here celebrating with us. This has not been possible but I want to assure you all that they will not stay any day longer in prison," he said.

"Of the 30 political prisoners, 11 cannot be accounted for," said Irene Petras, the director of the Zimbabwe Lawyers for Human Rights. "All the political prisoners urgently require medical treatment after being brutalized in custody by state security agents."

Among those in prison is 72-year-old Fidelis Chiramba, the MDC-T district chairman for Zvimba South, President Mugabe's rural home. According to court documents lodged by lawyers, Chiramba, along with several others, was subjected to an enforced disappearance at around 3 am by six heavily armed men on Oct. 30.

"He was heavily assaulted and subjected to beatings on the soles of his feet. He was put into a deep freezer, and then removed, had his clothes taken off and hot water poured on his genitals. He was made to parade naked in front of female abductees and his physical build mocked by his captors. He was never given medical treatment for his injuries," reads the affidavit prepared by Petras.

Douglas Gwatidzo, president of the Zimbabwe Association of Doctors for Human Rights, has personally Chiramba and several other political prisoners.

"On 6 February, Mr. Chiramba was taken to the Avenue Clinic for treatment. He exhibited evidence of congestive cardiac failure secondary to severe hypertension. He still exhibits evidence of soft tissue injuries secondary to assault. His medical condition warrants admission and stabilisation in a functional and properly equipped hospital," said Gwatidzo, in a statement issued to the media on Feb. 7.

He said Kisimusi Dlamini, MDC-T chief security officer, and Gandhi Mudzingwa, a former personal assistant to Tsvangirai, were also attended to on the same day and found to have serious medical conditions that needed hospitalisation.

They are also still locked up in Chikurubi.

Petras, whose ZLHR is coordinating the legal representation of all those languishing in prison, said political prisoners remained incarcerated while politicians congratulated themselves about progress made in moving towards the establishment of an inclusive government.

"We believe that the manner in which Mr. Chiramba and his fellow political prisoners are being treated is a reflection of the lack of sincerity of politicians in ensuring that the security of all persons in Zimbabwe remains paramount," she said.

Speaking on the eve of the swearing-in ceremony, Ernest Mudzengi, a political analyst with the National Constitutional Assembly (NCA), a non-governmental organization drumming up support for a new people-driven constitution said Tsvangirai would be in a fix if he proceeded to be sworn-in while his supporters remained locked up.

"The fact that political prisoners are still in makes the whole agreement of the inclusive government tricky and controversial," said Mudzengi.