KABUL, Mar 9 2009 (IPS) - Afghanistan has one of the highest percentages of female lawmakers in the world but their voices are rarely heard. A new political party, National Need, devoted to women’s rights, has announced plans to run for the next parliamentary polls. IPS spoke to its head, Fatima Nazari, member of parliament (MP) from Kabul province. 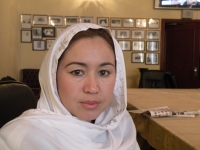 IPS: What are the biggest challenges facing female lawmakers in Afghanistan?. Fatima Nazari: The two main problems we face are the lack of a funds and the prevalence of Mujahedeen. Most of the time, (the mujahedeen) suffocate our voices. They don’t give us a chance to talk, and whenever they speak, the parliamentary authorities allow it. The parliament never listens to our suggestions. I’ve always been intimidated by the jihadi leaders in our parliament. Once, for example, (Haji Mohammed) Mohaqeq and (Abdul Rab Rasul) Sayaff (two notorious mujahedeen warlords turned parliamentarians) wanted to speak about some issue, and they were allowed to speak three times. But we never got a chance to speak.

Unfortunately, the U.S. has focused a lot attention and support on these mujahedeen warlords. They should listen more to the people, not to a bunch of former warlords. People don’t want to see these jihadi leaders in power. When the U.S. invaded, people were hoping to be released from the grip of these jihadis. But it never happened.

IPS: Afghanistan is an extremely male-dominated society. How do you and other female MPs try to fight this? FN: Men have the main role in our society, especially in the provinces. This means we usually need to take the permission of our husband or brother to do anything at all. In some cities, such as Kabul, where some women have come back from abroad, they don’t face this problem. But for most women this is a major issue.

They say in Islam that women have half of the rights of men. Islam also says that a woman should be treated this way because she is not the breadwinner of the family. Therefore a woman’s responsibility is much lower than a man’s. According to Islamic laws, a woman cannot be a leader. But look at me – I am leading a party! So these are the types of small steps we are taking. By leading this party, I hope to show the world that we are capable of doing the things that men can do.

IPS: The U.S. is planning to send thousands of more troops to the country. Do you support this? FN: I support more troops, but we should not forget that there should be a deadline for withdrawal. I think more troops will bring more security. We need these troops, but they should be deployed to places where they are needed – not in the cities and not near civilians. They should not come and go during the day because they will attract suicide bombs. When a suicide bomber blows himself up, he not only kills Americans, but it kills civilians in the area as well.

IPS: The Karzai government wants to negotiate with the Taliban and Gulbuddin Hekmatyar. Do you support this? FN: We are not completely against this idea, the idea of sharing a government. But we don’t want the Taliban or Hekmatyar to be in the leadership positions of the government, such as president or vice president. They can be a part of the parliament.

IPS: Whom do you support in this summer’s presidential elections? FN: I don’t have any favourite candidate among those who have announced their intention to run. I think we should wait and see what every candidate’s agenda is. Most importantly, I am waiting to see what the candidates’ agendas are for improving the condition of women in this country.

So far, I think Hamid Karzai has done a lot for women. We’ll see what else he or other candidates offer. Whoever can offer a lot will win the rewards.

Also, we need to ensure that all candidates follow the Afghan constitution. According to the constitution, neither Hamid Karzai nor any other candidate or government official has the right to determine the date of the election. Karzai has been trying to change the election date, but he should respect the constitution of the country.

IPS: The Pakistani militants recently made a cease-fire agreement with militants in Swat valley. What effect will this have on Afghanistan? FN: It’s not only me – all women here in Afghanistan were shocked when we heard about the Swat issue. I think this is yet another mistake made by the Pakistani state, because the extremists can use it as a sanctuary and a safe haven. They can launch more attacks and send more insurgents into Afghanistan to fight the foreign and Afghan troops here.

As a woman, I am concerned that these militants have declared that women shouldn’t go to school. We hope this influence doesn’t come to Aghanistan.