GAROPABA, Brazil, Mar 19 2009 (IPS) - In the city of Garopaba, a tourist destination on Brazil's southern coast, leftover food from restaurants will be turned into fertiliser to be used by farmers, who in turn will grow pesticide-free fruits and vegetables for snacks in the local schools. 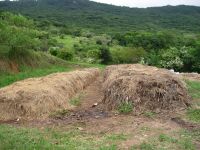 Garopaba, whose green hills run down to the white sands of its Atlantic coast beaches, is already a "Transition Town", a model being followed in more than 100 towns, neighbourhoods, islands and forests of Australia, Brazil, Britain, China, Japan, the United States and other countries.

As they have been doing since 2001, families and educators will gather at the end of the year in the town's main square to celebrate and demonstrate what they have learned about re-using rainwater, community gardens and holistic health practices – using things like mock-ups and music to do so.

With these and other initiatives, Garopaba, with a population of 16,400 (which balloons to 40,000 in the summer months) took on the "Transition Town" challenge, which began in Totnes, Britain in 2005 as a search for solutions to two major problems humanity is facing this century: peak oil and climate change.

"The intention is to do a 'redesign' in order to boost cities' resilience in the context of climate change and in the creation of a new energy matrix," explains May East, a consultant in sustainability issues and member of the group that trains the leaders of Transition Towns or neighbourhoods.

The ecological concept of resilience refers in this case to the ability of communities to find ways to resolve social, environmental and economic crises. In Totnes, the initial training helped raise public awareness of the problems and drew local residents into the effort.

In that British town, there is a local currency circulating, the Totnes pound, accepted by 65 companies and shops. This allows the money to be reinvested in the system itself, providing an incentive for the people and reinforcing the new sustainable economy.

The process involves investigating the town's past. By recovering the history of earlier residents, the population learns what life was like when much less energy was consumed. In the schools, children learn to consume in a more balanced way.

Dreaming is important, says East. The people are encouraged to think about the kind of world they want to live in, and to look for ways to make it a reality, so ultimately they take ownership of creating change.

That is what is happening in Garopaba. Known for its beaches and whale-watching tours to see the southern right whale (Eubalaena australis), it is now a reference point for sustainable development.

One of the first measures taken by Mayor Luiz Nestor, who took office this year, was a return to composting – the production of natural fertiliser based on organic waste – begun in 2002 and interrupted by political questions.

The first composting experience was part of a response to the government of Santa Catarina state, which required the municipality to find appropriate disposal of the solid waste that had been accumulating in open-air dumps, recalls the president of the city council, Mauro Santos do Nascimento.

The municipal government then turned to the Gaia Village Environmental Project (GV) that was already working on composting.

GV itself has its roots in 1997, when environmentalist José Lutzenberger was invited to educate owners of a private area in ways to help the natural environment to reconstitute itself. With the work of the Gaia Foundation, created by Lutzenberger, the native vegetation recovered and the project began to be replicated elsewhere.

After that contact, experts from within Brazil and abroad arrived to discuss with the community issues like sustainable construction, permaculture, eco-villages, organic food, and wind and solar energy – which contributed to a shift in the town's worldview.

"GV and the Gaia foundation are proposing to establish a connection between the movements and the demands," observes Dolizete Zilli, coordinator of the Project.

Every year, GV, the Gaia Foundation and the Garopaba Secretariat of Education celebrate the "Friend of the Environment School – Professor José Lutzenberger Exhibit".

As in Totnes, during the exhibition the community currency – the "ecco" – is in circulation, allowing participants to "buy" admission into workshops, seedlings of local native plants, and books about the environment in a special shop.

And composting has opened the way for some profound changes. It means big savings in the cost of transporting waste: in 2008, the city government spent about 390,000 dollars in trucking garbage 250 kilometres to the Biguaçu dump.

"Organic waste generates disease vectors when it is not properly disposed of," he said. People on the beach have even become sick due to the lack of treatment of fish remains, he added.

According to Joaquim da Silva Pacheco, president of the Reciclagem e Limpeza Ambiental company, which heads the composting effort, the resulting fertiliser will be distributed to organic farmers and to schools and child care centres that have vegetable gardens.

The general manager of the Banco do Brasil, Elmar Alves de Oliveira, says the bank is interested in participating: "The Fundação Banco do Brasil has lines of financing that could support recycling."

A campaign is also to be launched to encourage residents and tourists to join the spirit of the ecological efforts, says Marcelo Zanoni, municipal secretary of Tourism, Sports, Industry and Commerce.

One idea is to train health agents to guide people about how to separate out waste and recyclables at home.

Supermarkets, meanwhile, are still considering a proposal to distribute biodegradable shopping bags to their customers. The bags are made from cornstarch and potato waste, and could be used for depositing organic household waste.

Zanoni, who owns a restaurant, plans to invest in wastewater treatment. Beginning in July, nearly all the water that circulates in his restaurant will be recycled in some way.

For Silci Mattana, who prepares the snacks for the children in a local school, improvements began at home.

Worried about the environment in Santa Catarina, Mattana started separating out the different types of household waste two years ago.

"It doesn't take much effort," she says. The neighbours on her street are contributing as well. The collected material is sold to recycling companies, and with the money she buys a cake that she shares with her neighbours. The first was shared by 18 people. The next will have to be cut into 35 portions so that everyone can enjoy a taste of doing their part.