KAMPALA, Mar 11 2009 (IPS) - Ugandan exporters of dairy products to Kenya are bitter. They are accusing their bigger neighbour of imposing non-tariff trade barriers to block their produce from entering markets in Kenya and elsewhere. 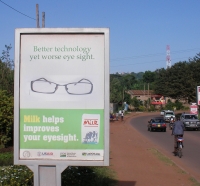 A billboard in Kampala promoting milk consumption as part of a U.S. department of agriculture campaign. Credit: Wambi Michael/IPS

Ugandan milk processors complain that Kenya maintains overly complex import regulations on milk products which have the effect of locking out dairy imports from Uganda. This defeats the aims of the East African Customs Union.

Sameer Agriculture and Livestock Ltd, Uganda’s largest milk processor, has lodged complaints against several non-tariff barriers which ‘‘disregard’’ guidelines of the East African Community (EAC) and the Common Market of East and Southern Africa (COMESA). The company’s managing director, Anup Sharma, told IPS that ‘‘Kenyan authorities continue to introduce non-tariff barriers using all sorts of excuses and disregarding EAC rules. They hold onto Uganda’s tea and only release it after the Mombassa auction is closed. They have banned four axle-trucks to ‘protect their roads’.

‘‘This is impossible to achieve because when you dry raw milk into powder, the protein level you can achieve from cow milk is 25 to 26 percent. This is aimed at protecting Kenyan dairy plants,’’ Sharma charged.

He alleged that Kenya Revenue Authority staff holds Ugandan milk at the borders for long periods of time, even when the consignments have all the required export documents. ‘‘As I speak, we have consignments which have stayed at the border for two weeks. Our transporters are harassed so they don’t take our goods.

‘‘And this is not the first incident. In the past it has taken a great deal of follow-up and persuasion from the Ugandan government before the consignments were released.’’

He added that, ‘‘as a result, the transporters have lost out because the vehicles are stuck at the borders. We also don’t deliver the orders on time. So, in a way, it is discouraging us.’’

Diary products should move without obstacles within the regional trading blocs but Ugandan milk processors say access to Kenyan market has been affected by restrictions imposed by the Kenya Revenue Authority. Sharma claimed that the restrictions have even affected exports beyond the Kenyan market. His company also exports powdered milk to Rwanda, Burundi, Congo, Tanzania, Mauritius, Dubai and parts of Europe.

The chairperson of the Uganda Manufacturers’ Association, Gideon Badagawa, confirmed that the restrictions by Kenyan authorities have affected other exports apart from milk.

"If we are to move towards full regional integration, the issue of non-tariff barriers must be resolved. We have raised this with the government and the EAC Secretariat. Uganda has opened its borders to Kenya but Kenya has not done the same.

‘‘Think about the five flights of Kenya Airlines to Entebbe every day, with each flight filled with day-old chicks coming in. Ugandan is not stopping these chicks but Kenya continues to block Ugandan chicks and now milk,’’ he said.

Badagawa was disappointed that authorities took so long to respond to the complaints. ‘‘When we agree at EAC level to abolish non-tariff barriers, all member states should implement that so that no single partner state takes advantage of the other.

‘‘We have complained to Uganda’s government and the EAC headquarters in Arusha but we have not received a concrete solution,’’ he explained.

A member of the East Africa Dairy Regulators Association, Agnes Audax Baguma, confirmed in an interview with IPS that her association has received complaints from Sameer Agricultural Livestock Ltd and other milk processors in Uganda and Tanzania.

‘‘The issue keeps coming up. We have handled it before during our meeting in Kigali when Tanzania pointed out non-tariff barriers like excessive customs and administrative entry. Kenya had also announced a specific quota for the Tanzanians,’’ she stated.

Baguma added that ‘‘the milk trade in the EAC is supposed to be duty-free and no other barriers should be imposed but, like (Sharma’s company), Tanzania complained that Kenyan authorities were demanding tests on the milk at border points before allowing it to the market.’’

No country is to carry out such tests if bureaux of standards had certified the exports, explained Baguma, who is Uganda’s Diary Development Authority’s quality and regulatory services manager.

‘‘We agreed that once the Uganda Bureau of Standards or other bureaux of standards from the member states have checked the goods and are satisfied with the quality, no other member state should question the quality.’’

Uganda Diary Processors chairperson Tom Opio Oming reiterated the problem of non-tariff barriers in an interview with IPS, adding that Ugandan diary processors have targeted the Kenyan market which has the highest milk consumption in the region.

According to a distressed Sharma, the reduction is also linked to the global financial crisis which is affecting Uganda’s milk exports to other countries outside east Africa. ‘‘When we started the plant last year the price was about six dollars per kilo of milk powder.

‘‘Today the price is about 1.85 dollars. The cost of the milk alone in that powder is about 2.50 dollars and we have not added the processing cost and other charges. So it is a serious issue. As a result we have been forced to reduce our capacity at the milk powder plant.

‘‘We are working at only 10 to 20 percent of our capacity. As we can produce so much more, the prices are really not viable,’’ he complained.

There are about 2.5 million smallholder dairy farmers in Uganda producing about 1,500,000 litres daily. Only 20 percent of this output is processed, leading to wastage.

The demand for milk is low because of the lifestyles of Ugandans who don’t have a culture of milk consumption. The cost of milk also places the product outside the reach of the population in some parts of Uganda.

Currently a 70,000 dollar campaign funded by the U.S. department of agriculture is promoting local consumption of milk in Uganda.