ECONOMY: Namibia Gets BIG on Poverty

WINDHOEK, Mar 21 2009 (IPS) - There was no mention of a special grant to tackle poverty in the Namibian national budget speech delivered on Mar. 19, much to the disappointment of campaigners for a Basic Income Grant (BIG) for all citizens. 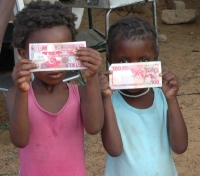 The success of a civil society-driven cash transfer pilot project in one of the country’s most impoverished areas, it was hoped, would win government over to the idea.

A year ago the Otjivero-Omitara settlement, 110 kilometres outside the capital Windhoek, was little more than an agglomeration of corrugated iron shacks. Hardly anyone lived there before 1992. The community grew as more and more people, evicted from the nearby white-owned farms, settled in the village.

Otjivero, located along the Trans-Kalahari highway, was a dead end street. There was no industry, no work, high crime and disastrous levels of alcoholism. It, in a sense, represented everything that was wrong with Namibia.

That was until a coalition of NGOs started a project to distribute cash grants to villagers in January 2008. Everyone under 60 receives $10 a month, regardless of their position or income.

"The universal grant is the only one of its kind in the world," claimed Reverend Claudia Haarmann, project director of the Social Desk of the Namibian Lutheran churches.

"Although cash grants have become an accepted way to alleviate poverty, they are always either means-tested or conditional. Often this excludes the really poor. It also means very high administrative costs to test everyone. We are convinced that you don’t need conditions to change behaviour,"

Residents had to register with the BIG coalition to qualify for the grant. Disbursements are made through a savings account with the post office, Nampost. Fingerprint verification is employed to eliminate fraud and ensure a watertight payment system.

"Of course people are happy, they think manna is falling from heaven, but that doesn’t mean they will squander the money," Otjivero community leader Steven Aigowab told IPS.

An interim evaluation by the BIG Coalition six months into the project seems to confirm this. Child malnourishment is down from 42 percent to 17 percent, employment up from 36 percent to 48 percent, and payments of school fees have doubled. The income of the local clinic has increased five-fold and crime has been reduced by 60 percent, according to the evaluation outcomes.

"There is no evidence that alcoholism is less, but it is also not worse", explains Haarmann.

Data from a second evaluation will be released in April and, according to the coalition, the positive trends are continuing. The research has refuted claims by researcher Rigmar Osterkamp of the Namibian Economic Policy and Research Unit (NEPRU) that the impact of the grants "is not very dramatic".

The coalition exposed methodological errors in the NEPRU research to which the institution acceded and Osterkamp returned to Germany in disgrace.

"They discredited themselves, but the ideology behind it is not gone," lamented Haarmann. She said the coalition often has to fend off arguments that black people cannot handle money responsibly.

"There is a school of thinking that you shouldn’t dish out money to people. That it is better spent on a project or something," Haarmann told IPS. "Show me one project that improves living standards across the board for 930 people at a cost of about $11,000 per month. Even the big public works programmes in South Africa only manage to attract a couple of thousand people and at a much higher cost."

It is estimated that it would cost the government about $280 million to roll out BIG to the entire country and that it could be financed through tax adjustments to luxury goods and income tax. The idea is not new. In 2002 the Namibian Tax Commission made similar proposals as a response to Namibia’s income inequality. According to the government’s National Planning Commission (NPC) 30 percent of the population is considered poor to extremely poor.

Critics of BIG say it is morally laudable but not economically feasible.

"The introduction of a Basic Income Grant may place too great a strain on public finances, especially at this time," the Institute for Public Policy Research noted in a report on the impact on Namibia of the global economic downturn.

Government skepticism stems from fears that the grant is not only unaffordable but would create dependency on the state. But with an election looming later this year, attitudes appear to be softening.

"Empirical evidence indicates that as long as the poor cannot meet their basic needs, we cannot empower them," the head of the NPC, Peter Katjavivi, told an international conference in Germany. "In this respect BIG programmes could be in the forefront of economic development."

The BIG coalition will take heart from this and continue to build on the success of its Otjivero project.