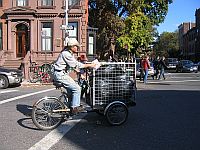 This way to the garden: Charlie Bayrer pedals bags of food scraps from the Fort Greene Greenmarket to his community garden, half a mile away. Credit: Laura Silver/IPS

“I keep it in my fridge in a plastic bag for the week and then I come and drop it off,” said Jake Robbins, who lives in the neighbourhood. “It makes my trash smell less.”

The collective effort yields 800 pounds, or 365 kilogrammes, of food scraps each week. Local gardeners turn it into “black gold”, organic compost that serves as a boon to their urban crops and helps reduce the municipal solid waste that ends up decomposing in landfills.

There’s no monetary reward for turning in carrot tops or orange pith, but there is a sense of pitching in and helping to support the hyper-local ecosystem.

“I believe in composting,” said Arnold Smith, who dumped off a bucket of bygone Brussels sprouts, corn kernels and decaying fruits on a recent Saturday. “We’re a family of four,” said Smith, “we eat a lot.” And they have a cement backyard, which would make it tough to compost on their own turf.

Each Saturday at the Fort Greene Market, volunteers set up six metal garbage cans across from booths with apples, onions, honey and hot cider. The sign propped against the garbage cans doesn’t list a price – there is no charge to drop off organic waste – but does encourage participants to pull full bags out of the cans and replace them with new ones during the course of the day.

The Council on the Environment of New York City sponsors 45 outdoor greenmarkets within the city’s five boroughs, but this is the only shopping spot with a compost drop-off.

Compost added to soil binds heavy metals and prevents them from contaminating water resources or being absorbed by plants. It also reduces emissions of methane, a potent greenhouse gas.

For those who drop off food scraps and for those who harvest them, reducing what goes into the waste stream is often a reward in itself – and an opportunity to give back to the community, albeit in a non-traditional way.

“You have to be a little crazy to haul compost,” admitted Alice Hartley, another member of the core (no pun intended) group who helped lay the groundwork for the compost transport system in October 2006.

Now, over the course of a month, nearly a dozen people take turns hauling the food scraps on an industrial tricycle built expressly for that purpose. The vegicycle is a single-speed contraption with foot brakes and a caged front platform designed to carry 10 garbage bags brimming with food waste.

Each weekend, the human-powered rig makes three or four trips from the market to one of the four participating gardens within a mile – or a 15-minute ride – of the market.

Charlie Bayrer, a neighbourhood handyman and self-taught compost guru, has been composting for 11 years at Hollenback Garden. He estimated that food scraps from the market drop-off make up half the raw materials that generate the 20 cubic yards of finished compost his garden produces each year.

Once the raw food scraps arrive at the garden, another collective process kicks into gear. Garden members help integrate the bags of food waste into five working compost heaps that generate temperatures of 160 degrees Fahrenheit (and are sometimes used to heat up pots of cider). Bayrer is glad for the fodder for his steaming compost heaps, but wouldn’t mind if passersby did more than drop off their rinds and skins.

“It would just be nice if they were more curious about what happened to it after the fact,” he said during a vegicycle run that followed a section of the New York City Marathon route.

Overall, the system just keeps on trucking with a small but dedicated group. “It’s a pretty low-maintenance arrangement at this point,” said Hartley, who does communications for an architectural firm and like Bayrer is a graduate of the Brooklyn Botanic Gardens’ Master Composter Programme.

“You just get on the bike and ride,” he said, adding that the group hasn’t missed a weekend since the project began three years ago. Neither rain, nor snow, nor 90-degree temperatures keep them from their rounds.

Yet, there is a certain irony in exerting so much human energy to move food scraps away from a green area that seems like it could be a perfectly good spot for compost gestation and generation.

Fort Greene Park’s 30-acre, 161-year-old expanse is punctuated with metal trash barrels, but there are no receptacles designated for organic waste. “Fort Greene Park doesn’t want food waste in their park,” said Arezzo, a high school science teacher who started a food-waste compost project at a junior high school five years ago, when he was on staff there.

“The Parks Department has a lot on their plate,” said Arezzo, “and they’re very afraid of food waste.”

Phillip Abramson, a Parks Department spokesperson, sidestepped the food question, but insisted that compost piles “benefit the city by diverting organic waste from the waste stream.”

And, although the Parks Department does not have direct oversight over the majority of community gardens in the city, there is some cooperation, especially when it helps bolster the department’s green image.

“We estimate that two-thirds of our 500 community gardens have some level of on-site composting,” said Abramson in an e-mail. “There is composting going on at hundreds of park and garden sites across the city. It is an activity strongly supported by all environmental and gardening groups.”

Hartley, who helped put the vegicycle system in motion, looks forward to the day when her group’s efforts will motivate other people to roll up their sleeves (and their pant legs) to create locally based sustainability projects.

“We’ve had some talks with Greenmarket people about replicating this model,” said Hartley, “we hope this programme will take off on a bigger scale.”

New York City Greenmarket Director Michael Hurwitz agreed. He called the compost trek a prime method of small-scale sustainable waste management. “I would ultimately like to be composting in every one of our markets,” Hurwitz said.

That would involve identifying local groups and organisations willing to do the dirty work, an involved process in itself.

In the meantime, Hurwitz sets an example in his personal life. He lives near the Fort Greene Park market and makes use of its weekly compost drop-off. And, every so often, his leftover vegetable parts end up even closer to home. In his windowbox.

“Sometimes if I’m done eating a turnip,” said Hurwitz, “I’ll just stick it down in the soil.”

*This story is part of a series of features on sustainable development by IPS and IFEJ – International Federation of Environmental Journalists ­ for Communicators for Sustainable Development (www.complusalliance.org).