PARAGUAY: The Lot of Domestics – Unceasing Work that Goes Unnoticed

ASUNCIÓN, Mar 19 2009 (IPS) - Olga is 39 and María is just 14, but both of them are looking for the same thing while they stay at a centre run by missionary sisters in the Paraguayan capital: a position as a live-in domestic. 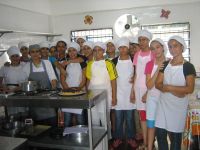 Olga Sanabria is waiting for her new employers to come and get her, while María is paying close attention to a course on house cleaning techniques. Both are staying at the Hogar Santa Librada, which receives a steady stream of phone calls from people seeking to hire domestic workers.

The centre, a way-station for women from all around the country who are seeking work in the capital, is run by the Scalabrinian Missionary Sisters and located near the Asunción bus terminal.

“This centre provides girls and women who have just come to the capital with a place to stay and an opportunity to receive training, in order to improve their chances of getting a job,” Sister Ibania Cordeiro da Silva, a Brazilian member of the mission, told IPS.

The training programme offers classes in cooking, washing, laundering, ironing, the use of home appliances, day-to-day house cleaning and tips on living in the city. Sister Ibania explained that it is an important step, because most of the prospective domestics that reach the centre have little formal education and many are minors.

Domestic service is the foremost occupation of women in Paraguay, where one out of five women who work are employed as domestics, 57 percent of whom are between the ages of 15 and 29, according to the General Statistics, Surveys and Census Office.

Women make up 32 percent of the economically active population in Paraguay, the poorest country in the Southern Cone of Latin America.

Domestics account for 6.9 percent of the economically active population; 93 percent of domestic workers are women; and 70 percent of female domestics have partial or complete primary school education or no formal schooling at all.

“Demand for domestics is high, but the working conditions are far below those of the rest of the wage-earning population,” Solana Meza, a member of the Association of Domestic Service Workers of Paraguay, told IPS.

A 2005 study by the International Labour Organisation (ILO) and the Asunción-based Documentation and Studies Centre (CDE) notes that under Paraguayan law, domestic employment is deemed to have special characteristics, and is thus regulated differently than other kinds of jobs.

In practice, that difference translates into fewer social and economic rights for domestics, the study says.

Meza agreed that the labour code discriminates against domestic workers and undermines their rights.

In Paraguay, domestics are classified as either full-time live-ins or full or part-time day workers.

“We have no breaks, we are always on duty, for up to 14 hours a day or more,” Sanabria, who has years of experience as a domestic, both in Paraguay and abroad, tells IPS.

Her own two children are in the care of relatives in her hometown, and she visits them infrequently, whenever she has time and money to make the trip. “I only earn enough to cover basic expenses, that’s all,” she says.

On average, live-in domestics earn just 40 percent of the official minimum wage of 250 dollars a month, as well as room and board.

They have the right to the “aguinaldo” – a month’s salary bonus paid to all workers – but they do not receive the family allowances that the governments pays to the rest of the country’s registered workers.

The family allowance is five percent of the minimum monthly salary for each dependent child under the age of 17 living with the beneficiary.

The ILO/CDE study says domestics suffer discrimination because they are mainly young, impoverished Guaraní-speaking women from rural areas with little to no formal education.

In a country with a long authoritarian tradition like Paraguay – which was under a dictatorship from 1954 to 1989 – women from such a background have few possibilities for exercising their full rights as citizens, and few are even aware of their rights, says the study.

Demand for domestics grew over the last decade in Paraguay, because growing numbers of women have gone abroad in search of better opportunities.

Traditionally, domestic workers from Paraguay have mainly gone to neighbouring Argentina, and to a lesser extent to the United States. But since 2001, more and more women have been heading to Spain.

In 2007 an estimated 70 percent of Paraguayans in Spain were working as domestics, raising children and caring for the elderly.

The constantly growing remittances sent home by Paraguayans living and working abroad have become an important source of foreign exchange in Paraguay. But many of those workers may be forced to return home by the global economic crisis, and remittances are expected to shrink.

The particular case of young domestics

But the global crisis means little to María, the 14-year-old who has been at the Hogar Santa Librada for two months, and who asked that her last name not be used.

María came to the Hogar after her mother died. She occasionally visits her two brothers, who live with their stepfather.

Like many underage domestics, María would like to continue her studies. But most employers prefer to hire girls who are no longer in school.

In Paraguay, school attendance is compulsory until the end of primary school, and 14 is the legal working age. But in practice, official studies on the economically active population include children from the age of 12 years old.

A 2001 study carried out in Paraguay by the United Nations children’s fund, UNICEF, found that nearly 11 percent of children are domestics and that 265,411 children aged five to 17 worked.

One out of four girls between the ages of 10 and 17 work, reported UNICEF, which added that it is hard to come by precise figures on the number of domestic workers.

The fight for equal rights

“We need better conditions to be established for all domestic workers, in terms of wages and working hours,” said Meza.

The Association of Domestic Service Workers of Paraguay has launched a joint effort with CDE legal advisers, the Juventud Obrera Cristiana (Young Christian Workers) and the Hogar Santa Librada, to fight discrimination.

The aim of the Association of Domestic Service Workers and its allies is to draw up a proposal for a draft law, based on the experience and contributions of domestic workers, to overcome the imbalances of the current labour regime.

The first step was to hold a forum for domestic service workers this month, in which delegates from around the country took part. “The idea is to coordinate actions at a national level and fight for our rights, in our country,” said Meza.

She pointed out that the conditions faced by domestic workers in Paraguay differ from the situation in Brazil and Uruguay, for example, where they enjoy the same rights as any other workers.

Sanabria’s new employers have come to pick her up. “This is very hard work, which most people don’t even notice or recognise. I hope things will get better,” she says as she is leaving.

Fourteen-year-old María, meanwhile, gazes out over the courtyard and says “I just hope to find work in a family that treats me well.”