Q&A: “Campaign of Fear Is Atrocious” Ahead of Salvadoran Vote

SAN SALVADOR, Mar 9 2009 (IPS) - “I would not say that the media in Latin America contribute to fomenting civic culture, overall. They generally head in the opposite direction,” says Rafael Roncagliolo, a Peruvian sociologist, journalist and election consultant. 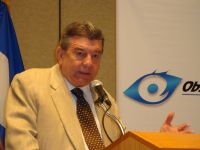 Voters in El Salvador will go to the polls on Sunday, Mar. 15 to choose a new president, in elections that have drawn close attention both domestically and abroad because of the very real possibility that the leftwing Farabundo Martí National Liberation Front (FMLN) candidate, popular talk show host Mauricio Funes, will win.

The campaign has been marked by questions about the transparency of the electoral process and an aggressive propaganda campaign against the FMLN by the rightwing Nationalist Republican Alliance (ARENA).

The campaign has also seen an increase in violence, in a country that already has one of the highest murder rates in the world, and whose economy has been hit hard by the global economic crisis.

The fear campaign waged in the media against the FMLN is “atrocious and denigrating,” said Roncagliolo, the founder and former secretary general of the Asociación Civil Transparencia (ACT – Transparency Civil Association), a Peruvian organisation that works with election and democracy issues, and head of the intergovernmental International Institute for Democracy and Electoral Assistance (International IDEA) for the Andean region.

The Salvadoran electoral system is “anachronistic” due to the control that the political parties have over the electoral court (TSE), said the expert in this interview with IPS, during a visit to El Salvador as an adviser to the Washington-based National Democratic Institute (NDI) and the Salvadoran Instituto Universitario de Opinión Pública (IUDOP – University Institute of Public Opinion).

IUDOP, with the support of the NDI, implemented a national election observer mission and “quick count” or parallel tabulation system during the Jan. 18 municipal and legislative elections, in which 2,000 election observers were deployed around the country. A similar procedure will be employed in Sunday’s presidential vote.

Nevertheless, Roncagliolo believes “the conditions for free elections and for the people to express their preferences are in place.”

IPS: What is your view of the Salvadoran electoral process? RAFAEL RONCAGLIOLO: It has many problems. For example, the makeup of the TSE, changes in playing rules after the electoral process has begun, or the dirty campaign in the media in favour of one candidate, based on discrediting his rival.

An electoral court made up of members of the political parties is anachronistic. The worldwide tendency is to professionalise election bodies; representatives of political parties sit on them only as observers.

IPS: The European Union election observers mission in El Salvador has reported a bias in media coverage in favour of one political party. What is your experience in Latin America? RR: Today, the media’s responsibility towards democracy is one of the main problems everywhere. We no longer have censorship by governments, but we have commercial censorship which serves the interests of media owners and leads to biased reporting.

All parties should receive equal coverage, not only in quantitative but in qualitative terms. That is democracy.

The media can have their opinion spaces, but they cannot take a stance for a candidate. They must be standard bearers for the voter’s right to cast an informed vote. That is the media’s democratic responsibility. In many cases, they only give coverage to some candidates in order to denigrate them.

IPS: What is your perception of the current media campaign here? RR: I think it’s atrocious. For example, one spot shows a protest against a group of people demanding free elections in Nicaragua in which a red FMLN shirt is shown, as if people couldn’t wear what they wanted. And that incident is presented in the Salvadoran press as if there were FMLN involvement in criminal activity in Nicaragua. [The ruling leftwing FSLN in Nicaragua faced accusations of fraud in the recent local elections]. That is simply unacceptable; it is outrageous manipulation.

Dirty smear campaigns are being carried out all over the continent, in some countries to a greater extent than in others, depending on how deeply rooted civic culture is in each case.

IPS: Should there be some kind of limits? RR: The thing here is that whoever has more money produces more publicity, and that is not equitable. There are some kinds of limits that work. For example, today there are four countries in Latin America – Chile, Mexico, Brazil and Ecuador – that have regulations that limit private financing of political parties, and others that penalise media slander.

But I would not say that the media in Latin America contribute to fomenting civic culture, overall. They generally head in the opposite direction; they meddle in the private lives of candidates and do not foment debate on the big, central issues, when they should be the big channel for public debate.

IPS: There has never been a presidential election debate in El Salvador. What is the experience in the rest of Latin America? RR: I believe that debate during election campaigns is essential. And I’m not talking about the rights of the candidates; I’m referring to the rights of voters. Voters have a right to be informed, and debates are a very important source of information. There are countries where elections without debates (between the candidates) are inconceivable.

In Peru, ACT managed to turn debates into a tradition. Debates are also an integral part of election campaigns in Chile and Brazil.

IPS: And what do you say about that attitude? RR: A lot of progress must be made to have a democratic civic culture.