CAPE TOWN, Mar 28 2009 (IPS) - Women from South Africa’s three Cape provinces have marched to parliament in Cape Town to denounce the country’s “slow and unbalanced” land redistribution programme. The protesters said if they are not given greater access to land, they will not vote in the country’s Apr. 22 general elections. 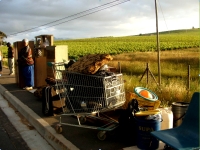 Evicted farmworkers with their possessions: while South Africa has been slow to redistribute land, more than two million farmworkers have been evicted from their homes in the past decade. Credit: Sikhula Sonke

Placard-waving women at the Mar. 26 protest criticised the country’s Minister of Land Affairs, Lulu Xingwana, for failing them.

“We want what belongs to us, we are fighting for land for the sake of our children’s future so no land no vote,” Maria Pietersen from the Northern Cape whose efforts to get land were frustrated by the local government.

The protest was the culmination of a two-day conference convened by the Surplus People Project (SPP), an organisation that advocates for agrarian reform in South Africa. Women from the provinces of Northern, Eastern and Western Cape exchanged personal experiences at the conference. Issues such as climate change, food prices and the global economic downturn also dominated the discourse.

According to Herschelle Milford, executive director of SPP, lack of access to land is central to problems faced by the women that participated in the conference. “Land reform has failed all, but even more for women. Some women spend a lifetime looking for land, and when they get it, it’s [just] one hectare. So women are saying we are the providers of food, we want to start this revolution in terms of land reform.”

Milford says the government is deviating from the Land Reform Provision of Land and Assistance Act that stipulates the promotion of economic growth and the empowerment of historically disadvantaged persons.

Concurring with Milford was Gahsiena van der Schaff, lobbying coordinator of the Aids Legal Network, an organisation that advocates for the rights of people living with HIV and AIDS. Van der Schaff said many people have died silently, their condition worsened by lack of shelter and land to produce food.

“This government is giving an impression that women are not good enough to own land and even to farm,” said van der Schaff.

The impact of inadequate access to land is also felt on commercial farms where gender-based discrimination is rife. Diana Hlathe, a farm worker in the fruit-growing area of Wellington, Western Cape told IPS how as a women, she is denied benefits enjoyed by male workers. She says equal remuneration is still a dream, and calls for government intervention have gone unheeded. Hlathe, who suffers from arthritis, says her weekly wage of $25 is not enough to cover medical costs.

“We are working very hard at the farms. The owners are getting richer because of our hard work but we are getting only survival wages. For instance, I was given R200 ($20) as bonus for the whole of last year. The government should do something,” moaned Hlathe.

Sikhula Sonke, a farm worker rights organisation has made several submissions to local and national governments without positive response. Ida Jacobs, organiser of Sikhula Sonke has been pushing for access to land for farm workers. However, she claims the government has shot down their efforts.

However the national Department of Land Affairs says it has fulfilled its pledge of allocating land to women. The department says through its Women in Agriculture and Rural Development (WARD) programme, it has established structures in all provinces. Although the department could not provide figures, it maintains most rural women have benefited from the WARD programme.

“We have women who have benefited from the land reform and who are even exporting their products. So that is evidence that much has been done to make sure that women have advanced as beneficiaries of the land reform programme,” said Eddie Mohoebi, national spokesperson of the department.

But the association of emerging farmers, the National African Farmers Union (NAFU), says women who got land during the government’s redistribution exercise are fewer than male beneficiaries.

“We are still compiling figures, but indications are that although women’s numbers are increasing, they still fewer than men. From our records, they are just below 50 percent of our total membership,” said Motsepe Motlala, president of NAFU.

The Surplus People Project is critical of the commercialisation of land and agriculture in South Africa. SPP believes the provision of land to small-scale farmers, farm dwellers and workers, is the best way to bring about the transformation of the agriculture sector away from monopoly by a rich minority to the benefit of the majority. The organisation is also lobbying for environmentally-friendly farming techniques.