LUSAKA, Mar 23 2009 (IPS) - Parliamentarians across the Southern African Development Community (SADC) have failed to put HIV on the political agenda. 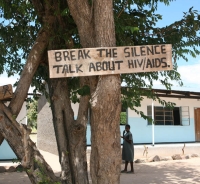 "Considering SADC is at the epicentre of the HIV pandemic, not enough is being done to address it. HIV has a very negative impact on [the region’s] development," lamented SADC Parliamentary Forum secretary general Dr. Kasuko Mutukwa at a media briefing in Zambia’s capital Lusaka on Mar. 18.

It is the responsibility of SADC’s 4,000 parliamentarians to ensure HIV and AIDS are on the agenda of all governments in the region. "Elections can come and go in our countries, but issues of HIV are hardly discussed," Mutukwa complained. "If all parliamentarians rose to the occasion, they could make a major impact on combating the pandemic."

Mutukwa called for the establishment of HIV/AIDS desks within each parliament in the region to push HIV-specific legislation and programmes.

SADC countries have committed themselves to a number of international goals with regard to HIV, but there has been little progress in meeting them. Targets include Millennium Development Goal (MDG) 6, which aims to halt and reverse HIV/AIDS by 2015 and achieve universal access to treatment for all who need it by 2010.

In addition, Southern African governments have pledged to meet indicators set by the United Nations General Assembly Special Session (UNGASS) Declaration of Commitment on HIV/AIDS that aspire to reduce new HIV infections of 15 to 24-year-olds by 25 percent and mother-to-child transmission of the virus by 50 percent.

Although the intentions are there, little has happened to implement strategies to meet these goals on country level. Setting targets is not enough, activists say. "We don’t want to see promises, but promised fulfilled," said Zambian AIDS activist Professor Michael Kelly.

A 2008 UNAIDS study shows that although more than half of all Southern and Eastern African countries have planned HIV prevention strategies, only 20 percent of those are being implemented. "This indicates a huge gap in prevention," explained SADC PF HIV/AIDS policy advisor Boemo Sekgoma.

Lack of implementation is caused by inadequate and divided leadership, limited analysis of the drivers of the pandemic, weak strategies and targets, lack of results-based accountability as well as weak national authority and insufficient institutional architecture, she said.

"[Governments’ and parliaments’] priority actions should be capacity building, analysis, finding funding gaps and better budgeting," recommended Sekgoma, adding that more resources need to go towards the drivers of new infections, which are multiple and concurrent partnerships with low consistent condom use, in the context of low levels of male circumcision.

Kelly said, ideally, the HIV crisis should force countries to make bigger efforts to reach all of the eight MDGs, such as reducing poverty and hunger, access to primary education, reduction of child mortality and improved maternal health.

"Politicians should realise that if they improve access to primary education, our children will be better educated and therefore less likely to be infected with HIV," Kelly suggested, while pointing out that achieving the first MDG, reducing poverty and hunger, would mean HIV-positive people have better access to nutrition and as a result will be able to stay healthy for longer.

"HIV drives progress towards the MDGs in an almost perverse kind of way because HIV makes us realise that we need to meet these goals," he explained. "If we didn’t have the disease, we would be doing something about education, health care, poverty and hunger, but we wouldn’t push so hard."

Other health experts, however, were less optimistic than Kelly. "I don’t have a single example of a parliament leading us anywhere with regard to HIV," said Lusaka-based retired medical practitioner and AIDS activist Dr. Manasseh Phiri.

Parliamentarians won’t take action unless grassroots and community leaders set the agenda for politicians and force them to address issues within their communities, Phiri believes: "They need to be forced to serve the interests of their constituencies if they want to be re-elected."

When parliamentarians are directly exposed to constituent needs, they can focus on acute problems and develop consensus around the need for solutions, according to SADC PF. This can lead to legislation, but also to follow-up inquiries to government ministries and to shifting governmental budget priorities.

Instead of consulting with their constituencies, parliaments in the region have embarked on a dangerous trend of over-legislating HIV, warned Kelly. A number of parliaments are contemplating criminalising transmission of the virus by introducing laws that make it a criminal offence to transmit HIV knowingly.

Mozambique, for example, recently passed such legislation to strengthen existing legal frameworks to deal with wilful HIV transmission, especially in cases where women or children are infected through sexual violence.

AIDS activists are concerned, however, that criminalisation of HIV transmission could drive the pandemic underground and increase prevalence. "Such laws will be self-defeating. If wilful transmission of HIV is criminalised, then my best defense will be that I didn’t know that I am HIV-positive. As a result, HIV testing will decrease substantially," argued Kelly.

He also worries that criminalisation of HIV transmission will increase stigma, silence and ignorance of one’s HIV status. "Bad laws can increase the spread of the virus," he quoted South African Judge Edwin Cameron, recommending that instead of "over-legislating, parliamentarians should ensure that more resources are invested in HIV prevention".

Instead, political leaders should show personal commitment to overcoming stigma by publicly testing for HIV, publicly acknowledging their status and getting involved in hands-on HIV projects in the communities of their constituencies.

Newly published research by the Institute for Democracy in South Africa (Idasa) shows that such a large number of Southern African politicians are affected by HIV and AIDS that it has started to hamper governance in the region.

In South Africa, for example, almost half of the 589 municipal by-elections between February 2001 and December 2007 were caused by death of councillors. And most of these deaths were those of people between 25 and 49 years old, according to Idasa researchers Kondwani Chirambo and Justin Steyn who studied the impact of HIV and AIDS on local government in twelve local municipalities in the Western Cape, Northern Cape, Free State and KwaZulu-Natal.