HARARE, Mar 5 2009 (IPS) - Her small tattered book is full of lists of orders for goods such as beer, maize-meal and chemicals. On another page are addresses and phone numbers of store managers while, on another, a list of names has been jotted down along with corresponding amounts. 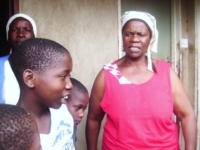 ‘‘This is my accounting book. It has my orders for goods that I am supposed to go and buy for my clients in Botswana, as well as a list of people who have paid and also those who haven't, plus those goods that are in short supply,’’ Amai Towe, a Harare-based cross-border trader, told IPS with a satisfied tone.

Among her customers she counts supermarkets and retailers. ‘‘I supply these businesses with goods from beer to hair products,’’ said Towe, who travels to Francistown in Botswana every week. The 43-year-old is just one of the thousands of Zimbabwe's enterprising cross-border traders who travel across the country's borders into neighbouring countries, bringing in much-needed foodstuffs.

A visit to the Ramakobane-Plumtree border post between Zimbabwe and Botswana reveals a hive of activity.

Immigration officials at the Beitbridge border post, which Zimbabwe shares with South Africa, estimate that about 2,000 traders cross the border everyday into Musina, the nearest town on the South African side. Heavily loaded vehicles with maize-meal, beers, soft drinks and rice are a common sight.

Traders also travel to Zambia, Mozambique, Namibia and even faraway countries such as China, Malaysia and Singapore. These mostly middle-aged women deal in basic goods, including soap, bottled drinks, canned beer, rice, maize-meal and any other scarce goods.

From the time when the Zimbabwean government embarked on a disastrous land ‘‘reform’’ programme that dealt the farming and food sectors a blow, cross-border traders have been the mainstay of the country's economy. They have kept the collapsing Zimbabwean economy going.

Many started out as vendors of artefacts who used the proceeds to buy goods for resale back home. But over the years, particularly with the worsening economic situation in Zimbabwe, the traders have developed viable and organised economic alternatives.

The bulk of goods and services now available in Zimbabwe are the products of the entrepreneurial spirit of traders who spend sleepless nights on regional roads, filling the void left by departed or crushed formal businesses.

‘‘I supply bottle stores with beer from Botswana, chemicals to a saloon in town and other groceries to small retailers in town,’’ explained Towe, who looks after a family of four.

‘‘I also belong to a group of individuals who supply a supermarket with biscuits and cereals. We have been organised into a cartel because they realised that one person cannot meet big orders, therefore they are using many of us. They are saving a great deal because they don't have to dispatch a truck to Botswana. We meet their requirements.’’

A barman at a hotel in Harare told IPS that his hotel is open to offers from individuals who can meet the requirements of large orders. ‘‘We have shortages at times but the cross-border traders have helped us a lot with supplies. A lot of our clients prefer foreign beers and wines which can only be sourced from neighbouring countries. Most of the time we turn to these traders.’’

Even in the remotest areas of Zimbabwe, traders have been managing to provide supplies. In rural Watsomba in Zimbabwe's eastern province, goods such as Mozambican beer are common.

Institutions such as boarding schools are also engaging their services. Even the country's central bank has contracted agricultural traders to source farming implements on behalf of the country.

At the beginning of last year, virtually all shops in Zimbabwe were empty until the Reserve Bank of Zimbabwe authorised selected shops to sell goods and services in foreign currency. This proved to be the boost that many traders had been waiting for. Traders’ incomes increased as they now trade in foreign currency which makes it easier to plan their business.

The cross-border traders now have an association through which they lobby authorities to safeguard their interests. The Zimbabwe Cross-Border Traders Association (ZCBTA) represents the interests of approximately 15,000 registered traders.

The South African government has since recognised them by granting them year-long business visas to facilitate easy travel through border posts. Previously they were issued with six month visitor’s visas which had many restrictions.

The Zimbabwean government has also suspended tariffs on all imports, except goods classified as luxuries, a move which has boosted cross-border trade.

‘‘We use these platforms to advance our interests. We are currently lobbying sub-Saharan African governments to ease trade entry requirements to make it easier for small business people to cross borders,’’ he declared.

The group is also working with other traders’ associations in the region to push for the introduction of a regional passport that will facilitate movement within the Southern African Development Community (SADC).

‘‘It will allow traders to make multiple entries into other countries and reduce administrative costs and times at border check-points,’’ argued Borerwa.

Traders still lament that the recently signed SADC free trade area is yet to produce benefits, given the ill treatment and long hours that they have to endure at regional borders.