SANTO DOMINGO, Apr 23 2009 (IPS) - A truck full of female police officers, dressed in black riot protection gear, pulled up in front of the General Assembly building here to confront and control the crowd of women who had gathered on Tuesday to protest a “right to life” amendment to the Dominican constitution. 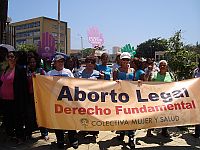 Having failed to reverse the country’s strict abortion laws two years ago, various women’s groups assembled to protest a new constitutional amendment, Article 30, which reads: “The right to life is inviolable from conception until death” – for the fetus, that is, not for the pregnant woman.

The amendment was introduced along with 43 others by President Leonel Fernandez, who asked for his entire party’s support.

The debate has pitted civil society and medical groups against the heavy influence of the Catholic Church.

Both the College of Physicians and the Dominican Gynecology and Obstetrics Society have public positions in favour of therapeutic abortion to save the life of the mother or in the case of rape or incest.

On Wednesday, the Obstetrics Society warned that the number of maternal deaths – currently about 160 per 100,000 live births – will increase considerably with the approval of the amendment.

“Those deaths are the product of unsafe abortions,” said the society’s president, Aldrian Almonte. “I would like the honourable legislators to tell me what are we going to do before the presence of a woman with severe preeclampsia or eclampsia, convulsing in any emergency room around the country, what must we do? See her die to protect ourselves from the repercussions that Article 30 stipulates?”

The Cardinal of Santo Domingo, Nicholas de Jesus Lopez Rodriguez, used his Good Friday sermon to restate the Church’s opposition to abortion under any circumstances. A local parish priest at a press conference later accused feminist groups, physicians and legislators of having been corrupted by money from foreign NGOs.

On the day of the vote, hundreds of women stood behind the barrier in front of the Senate in the afternoon sun, carrying signs such as “No Rosaries on our Ovaries” and chanting slogans against Article 30. By the fence, a group of six counter protestors held up signs reading “Abortion is Terrorism.” Earlier that morning, a Catholic Mass had been said in front of the Senate.

Lillian Fundera, a gynecologist, explained the implications of the constitutional amendment.

“If Article 30 passes as it has been proposed by the executive branch, it will increase maternal mortality. Many more women will die. Why? Because women will still seek abortions as they have always done,” she told IPS.

“Here in the republic, we have 100,000 abortions a year. This was certified by the Guttmacher Institute in 1999 and again in 2000. We have no figures after that because it is not talked about,” she explained.

She said the cost of the procedure would increase because the process will become more clandestine. “Also this amendment will also prohibit the use of some forms of contraception, such as the IUD, which prevents the implantation of a fertile egg. Fifteen to 20 percent of the women in this country use this form of contraception. This is a form of contraception used with stable couples. But remember, in this country most women do not have stable partners, over 39 percent of the households are single mothers with children.”

Fundera said the amendment would make the “morning after” contraception-blocker pill illegal as well, and would bar therapeutic abortions in the case of ectopic pregnancies.

“There is nothing else to be done in an ectopic pregnancy. If it is not ended, the mother will die. This amendment makes that life as valuable as the life of the mother,” she said.

The current abortion law in the Dominican Republic is extremely strict, carrying criminal penalties between six months and two years for anyone causing an abortion by any means. These penalties can be applied to the doctor, any attending medical personnel, and the female patient.

While both politicians and Church leaders repeat publicly that abortion is illegal, in practice, the law is not enforced. The Maternity Hospital Altagracia in the capital, the nation’s largest, reported 6,300 abortions performed last year, over 80 percent of them on teenagers.

Many of these were the result of complications after home use of the drug Misoprostol, one of the two drugs used in RU486, which is approved for use in medical abortions in the United States. In the Dominican Republic, Misoprostol, like most non-narcotic medicines, is available at pharmacies without a physician’s prescription.

Asked if she knew of any cases of criminal prosecution under the existing law, Dr Fundera said, “I have information on two cases, but these were both abortions by choice, not therapeutic abortions. But in both cases, the woman and the doctor were released within a day with no further legal action.”

Maria Lora, of the Research Centre for Feminist Action, explained the legal implications. “In this country, we have a history of constitutional reform. No matter what government comes in, they always reform the Constitution. Now in this round of reforms, there is one that recognizes the rights of equality of the sexes, and on that, we are completely in accord,” she said.

“Article 30, however, will cause many difficulties. From the medical point of view, it will mean that doctors will be completely prohibited from any type of abortions, because it will be in the Constitution. They will have to stand by and let the women die,” Lora told IPS.

Doris Dominguez put her concerns more personally. “If a woman is unwilling to give birth, she should be able to have an abortion,” she told IPS. “If a girl is raped by her father, or a criminal, she should not have that child because it will be a child full of pain because the mother does not want it. What will become of this child? Nothing.”

Late in the evening Tuesday, the amendment came to a vote, with 171 votes in favour and 32 opposed. There will be a second reading of all the amendments. Feminist groups vowed to continue the fight and to bring the case to international human rights organisations.