SAN JOSÉ, Apr 30 2009 (IPS) - Domestic employees in Costa Rica have run out of patience. After 17 years of fighting, they are threatening to report the state to international bodies if their slave-like working hours are not cut back. 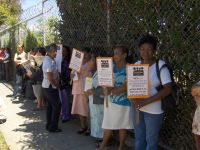 The Association of Domestic Employees (ASTRADOMES) is lobbying the executive and legislative branches of government to revoke an article of the outdated Labour Code that permits 12-hour workdays for domestics, which can be extended to 16 hours.

This is the last battle in a long campaign “for the law to stop treating us as second-class workers,” 49-year-old Ileana Morales, who has been working for the rights of domestics for 12 years, told IPS.

ASTRADOMES is demanding that working hours for domestic employees be the same as for other workers in this Central American country – 48 hours a week – and warns that it will report the state to the Inter-American Commission of Human Rights (IACHR), with the help of the Washington-based non-governmental Centre for Justice and International Law (CEJIL), which has already pledged its support.

Nearly 12 percent of working women in Costa Rica are domestics, so their claims will have repercussions for the labour market and also for the middle and upper classes in this country who benefit from their discriminatory working hours.

In 2008, ASTRADOMES scored a decisive victory when the constitutional chamber of the Supreme Court recognised that domestic employees suffered discrimination, and ruled that they have a right to one day off a week, as well as national holidays.

But the Court dismissed the demand for an eight-hour day – the key point in the lawsuit brought by ASTRADOMES in 2005, Álvaro Moya, the organisation’s legal counsel, told IPS.

Costa Rica’s Labour Code dates back to 1943 and regulates paid domestic work as an exceptional case, “with several discriminatory rules,” said Moya, in whose view a workday with slave-like hours is clearly unconstitutional.

The Costa Rican constitution of 1949 “contains more guarantees,” the lawyer said, but labour issues continue to be regulated by the Code, which is in violation of Convention 11 of the International Labour Organisation (ILO), signed by Costa Rica in 1962, that says that all workers have a right to equal labour conditions.

Congress is dragging its feet over the second debate of a draft law to limit daytime work by domestic employees to eight hours, and night-time work to six hours. The first debate on the bill was held in November 2008.

Rosita Acosta, the head of ASTRADOMES, told IPS “we were promised that the law would be approved in April, and we will keep up the pressure until it happens.”

As part of this pressure, ASTRADOMES delivered a letter to President Óscar Arias in March stating that “if the vote has not taken place by Apr. 30, we will take the matter to the IACHR” and sue the Costa Rican state for discrimination.

But Moya is not optimistic, especially as Congress is in the final year of the current legislative term. “We have exhausted all legal avenues in Costa Rica, with the appeal on grounds of unconstitutionality and the law that is now bogged down in parliament,” he said.

“We have delivered their petitions to the Ministry of the Presidency and we are trying to get them approved,” she said. But the draft law, she explained, is currently tied up in committee, and “we’ll have to see when” the second and final debate to pass it is held, probably not until after May.

Salazar said the constitutional chamber of the Supreme Court had rejected the premise that different working hours were a violation of the constitution, although a law could remedy that discriminatory aspect. INAMU is part of the state and will play a negotiating role if the claim is taken to the IACHR.

Nearly 120,000 people work as domestic employees in Costa Rica, according to the National Statistics and Census Institute. Ninety percent of them are women, and 60 percent are foreigners, mainly from neighbouring Nicaragua.

With a GDP per capita of 6,557 dollars in 2008, this country of 4.5 million people has a relatively large middle class which can afford to employ domestic help.

An estimated 8.3 percent of child labour in Costa Rica works in domestic service, making a total of some 9,500 children aged between five and 17 who do paid work in other people’s homes, nearly all of them girls, according to ILO statistics from 2002.

Most child domestic labour occurs in rural areas, the ILO says, where women heads of household must work outside the home and need someone else, mainly under-age children employed informally, to look after the house and children.

Costa Rican law prohibits working under the age of 15, and education is obligatory until that age. Fifteen to 17-year-olds may work up to six hours a day, providing they can continue their studies.

Barely 12 percent of domestic employees have social security coverage for sickness, disability and retirement. The new law would require employers to register domestics with the Costa Rican Social Security System.

Acosta is quite clear in her mind about why there are so many hurdles to establishing the same rights for domestic employees as for the rest of the workforce. “Ministers and lawmakers are also our employers, and it is not in their interests to expand our rights,” she says. In her view, that is why “political will is lacking.”

The minimum wage for domestic employees is the lowest in the country, equivalent to 207 dollars a month, more than half of which is paid in kind as food, accommodation, personal items and toiletries.

The total wage is the basis for the annual additional bonus payment provided by law, and for severance pay when employment is terminated. Workers are entitled to two weeks’ vacation only after having worked for the same employer for 50 weeks.

The draft law delayed in parliament improves all these aspects of working conditions, not just working hours, and its starting point is the concept that there is a historic debt with this sector, which has been treated as an exception and has been discriminated against in terms of labour and human rights.

Ileana Morales came to Costa Rica in 1993, when she was 33, and the first few years were hard for her because of her status as an undocumented immigrant. “When I telephoned in response to job advertisements and said I was Nicaraguan, they would hang up on me straight away,” she said.

Six months later she got a job, but she lived in constant fear of deportation. Immigrant women are highly vulnerable to the threat of being fired or deported. “I didn’t even feel safe walking around outside until I got my identity documents in the 1999 amnesty,” she said.

Since then her situation has greatly improved. “I have been with my present employers for nine years, and I’m still with them because they treat me as a person and respect my rights,” Morales said.

In her view, ASTRADOMES has transformed the lives of domestic workers “because it has carried out a real revolution, informing women about their rights, providing advice and training workshops, and supporting us when we have problems.”

On her monthly wage of 250 dollars, Morales managed to put her three children through school in Nicaragua. Her eldest son will finish law school this year, and she longs to go back. “I love Costa Rica, but I wouldn’t change my roots for anything,” she said.

All these years that she has been living in the house where she works, she has been able to send 90 percent of her wages to her children. “I’ll go back as soon as one of them starts working,” she said. And her dream includes independence: “I won’t ever work for someone else again,” she concluded.