Q&A: 'Women Are Not Equals in Our Society'

RAMALLAH, Apr 8 2009 (IPS) - As a man in a patriarchal society, an outspoken advocate of women’s rights and a harsh critic of the way Palestinian women are treated, Mashoor Basissy, MOWA’s director in the West Bank, brings a fresh male perspective to the growing problem of domestic violence against Palestinian women. 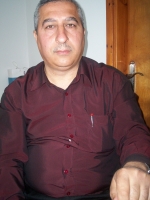 IPS: What laws cover domestic violence and honour killings in the Palestinian territories? Mashoor Basissy: The Gaza Strip falls under the Egyptian Penal Code while the West Bank falls under the Jordanian Penal code.

Men convicted of honour killings get a maximum sentence of six-months imprisonment if caught and prosecuted. There are no specific domestic violence laws only general assault charges. A woman has to be hospitalised for at least 10 days to press serious assault charges and she requires the testimony of two witnesses who are not related. Furthermore, rape is not recognised as a crime within marriage.

IPS: What action can the police take if her husband beats a woman? MB: The hands of the police are tied and they are limited in what they can do. What currently happens is that the women is taken to jail for a few days for her own protection. Apart from the fact she is separated from her children she is also subjected to the unpleasant prison conditions and mixes with the likes of prostitutes or drug-addicts. Again this is regarded as very shameful in our society.

The last PBS survey also reflected that only 1.2 percent of female victims had filed a formal complaint against their husbands with the police. Less than 1 percent of abused women sought counseling and protection at police stations.

IPS: Domestic violence is a taboo subject in Palestinian society. MB: As a Palestinian man I have to tell you that women are not regarded as equals in our society. The courts enable the male perpetrators of domestic violence and honour killings to get off very lightly if they are even brought to justice in the first place which is unlikely in most of the cases.

It is also regarded as shameful to involve the authorities in what is considered a private family affair. Women are embarrassed to report the abuse because they know that nothing will happen. Even female relatives take the side of the male perpetrators in many instances.

Furthermore, if the victim antagonises the family by getting the police involved, divorce often follows. Few Palestinian women are able to support themselves economically as only a minority of women here work and a woman living alone is subject to rumours about sexual fidelity which again could endanger her and make her a target for attacks.

Should the victim remarry, she automatically loses custody of her children.

IPS: What are you and your ministry doing to change the situation? MB: The shelter in Bethlehem was established by our ministry. More shelters and rehabilitation centres are needed, especially in Gaza, and we are looking into establishing more in consultation with a number of NGOs. Even if we can’t set up big shelters we are considering renting a few apartments for women as temporary safe havens.

We have a draft law before the Palestinian Legislative Council (PLC) to change the Personal Status Law, which amongst other issues governs the treatment of women before the law, to make it more gender equitable.

President Mahmoud Abbas signed the UN’s Convention on the Elimination of Discrimination Against Women (CEDAW) and that obliges signatories to implement gender equality but the ratification thereof will take time.

We are also working alongside the Women’s Centre for Legal Aid and Counselling (WACLAC) to pressure and lobby the government to implement necessary changes.

The first police family unit, catering specifically to domestic violence, has been established in Bethlehem. We are hoping to establish such a unit in every police department in the future.

IPS: What else do you think needs to be done? MB: Lots needs to still be done. More pressure needs to be put on the authorities and our leadership to enforce the political will needed to implement the necessary changes.

Political stability is essential. Once a new unity government is established then the PLC, which is responsible for implementing new legislation, can assess the draft bill we have submitted to them. But the functioning of the legislative council has also been crippled by Israel’s mass arrest of Hamas PLC members in the West Bank. So their release by the Israeli authorities and a resolution to the infighting are imperative for progress on this front.

Additional forensic units are necessary and we also have to streamline our administrative and staffing departments to maximize efficiency. The introduction of apprehended domestic violence orders where the man is forced to leave the home rather than the woman would be positive

IPS: Will all the above help if there is no fundamental change in the attitude of Palestinian society? MB: The above will help significantly but yes there has to be a sea-change in the attitude of people here. I know of a number of cases involving Israeli-Arab women in Israel who had the protection of the Israeli police and the support of Israel’s more enlightened domestic violence laws.

However, many women were still murdered, and continue to die, because once the family has decided that these women are going to die, all the protection in the world, and all the laws backing are rendered void when the women eventually returns home.