SOUTHERN AFRICA: Climate Change to Shrink Agricultural Production by Half

DURBAN, Apr 21 2009 (IPS) - Environmental researchers predict Southern Africa will be hit heavily by climate change over the next 70 years. Agricultural production is projected to be halved – a development that will threaten the livelihoods of farmers in a region where 70 percent of the population are smallholder farmers. 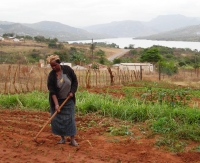 "We will be seriously affected by climate change in Southern Africa. Agriculture and biodiversity will experience a particularly negative impact," Dr Constansia Musvoto, researcher at South Africa’s Council for Scientific and Industrial Research (CSIR), told members of the Southern African Confederation of Agricultural Unions (SACAU) at the organisation’s policy conference in Durban on Apr. 15 and 16.

Temperatures will increase by up to six degrees Celsius, while rainfall will drop by as much as 40 percent in some parts of the region, Musvoto said.

As a result, the region will experience more and longer droughts, increased crop failures and have less fields and pastures due to water shortages. In addition, natural disasters will be more intense, while pest outbreaks for both crops and livestock will become more frequent.

Musvoto also predicts that there will be more diseases in Southern Africa. "Due to rising temperatures, malaria will spread more widely, for example, which will negatively affect the availability of farm labour," she explained.

Farmers have already felt the first effects of changing climatic conditions. In 2006, the production of maize, the main staple in the region, fell short by 2.18 million metric tonnes due to droughts in Namibia, Mozambique, Swaziland, Zimbabwe and South Africa.

Flooding in the Zambezi basin has been affecting Angola, Botswana, Namibia, Zambia and Zimbabwe, said Musvoto. Both Seychelles and Zambia have been experiencing a mixture of increased droughts and increased flooding.

The World Food Programme (WFP) announced in January that about 6.5 million people will need food aid in Southern Africa by the end of April.

The region has been struggling with low yields for the past few years, especially with rapidly declining cereal production, according to Pius Chilonda, sub-regional coordinator of the Regional Strategic Analysis and Knowledge Support System for Southern Africa (ReSAKSS-SA).

Chilonda believes low yields are caused by inadequate management of water and land resources. At the same time, African farmers’ earnings are down due to lack of access to agricultural markets and technology. "There is not enough regional agricultural research that could help farmers deal with climate change," he added.

If farmers had better information, they could more easily adapt to changes in weather patterns by changing the crops they plant, planting more crop variety, conserving water or by using organic manure instead of chemical fertilisers.

Still, such measures might not be sufficient to reverse the impact climate change already has on agricultural productivity. "Farmers have to diversify their income if they want to survive. People need to seek work elsewhere because they can’t completely rely on agriculture anymore," she said.

Although governments around the globe have signed a number of treaties aimed at addressing climate change, such as the Kyoto Protocol that seeks to reduce carbon dioxide emissions, they have shown little benefit for African countries.

For example, the Kyoto Protocol’s Clean Development Mechanism (CDM) allows industrialised countries to gain greenhouse gas emission reduction credits by investing in projects that reduce emissions in developing countries. The idea behind the project is that developing countries will benefit from foreign investment and technology transfer from countries in the northern hemisphere, which are the biggest environmental polluters.

Although this might sound good in theory, the CDM has not yielded results for Africa. By October 2008, only 1.4 percent – or 17 – of all global CDM projects were registered in Sub-Saharan Africa. Out of the 17, 14 are located in South Africa, the continent's richest economy.

"We don’t see CDM projects in the rest of Africa because countries find it difficult to meet the conditions set out for participation," explained Musvoto. "Project set-up costs are high, required research data is missing, and most developing countries lack the technical training and support needed."

"Africans need to influence treaties [when they are drawn up] to ensure that African conditions are recognised," she suggested, referring not only to African governments but also to farmers' organisations. "Farmers are not yet part of international discussions on climate change, but they have to be."

SACAU, a confederation of 13 national farmers unions and regional commodity associations from nine Southern African countries, is now lobbying governments in the region to put climate change on top of their political agendas.

"We want governments to mainstream climate change into all their policies, from agriculture to rural development, trade and energy," said SACAU president Ajay Vashee. "We also advocate for governments to form national bodies that actively look at climate change adaptation and mitigation and match policy with budget allocation."

So far, most Southern African governments have ignored warning signs. Despite increasing food insecurity and plummeting agricultural productivity, they less than five percent of their national budgets go towards agriculture.

According to ReSAKSS data, only Madagascar, Malawi and Mali have bumped up national expenditure to ten percent in an attempt to strengthen agricultural productivity.