KAMPALA and Gombe, UGANDA, Apr 6 2009 (IPS) - Primary health care in Uganda is hampered by a shortage of doctors and nurses, but trained volunteers from the community are stepping into the breach. 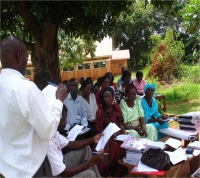 Robert Kito goes from door to door in the village of Gombe every day, checking if residents are doing fine. Where they have complaints, he either offers immediate treatment from a kit he has been issued, or refer cases to the health centres if need be.

Kito is one of more than 3,000 village health team (VHT) members recruited to help in the provision of health services to the people of Mpigi district 40 kilometres from the Ugandan capital, Kampala.

VHTs are involved in community mobilisation for treating minor ailments, routine immunisation, HIV/AIDS counseling and testing, and informing the community about services available at health units.

Kito and other VHT volunteers have been given kits called "Homepacks" which contains drugs like the anti-malarial Fansidar and Panadol, a pain-killer commonly taken for just about any sickness – self-medication is being encouraged by government, over opposition by Uganda's medical association.

Doctor Ruth Nasanga, Mpigi's district director of health services, told IPS that the volunteers are helping extend health services to a population of 1.4 million people who are underserved by formally–trained health practitioners.

"We had only 62 health centres in the district and just a few health personnel running the facilities, which made it difficult for us to give health services to the people," says Nasanga.

The doctor-patient ratio of less than 1:24,000, according to a 2008 World Health Organisation report, is alarmingly high. The situation for nurses is quite similar. Government is striving to reduce this by training more nurses and doctors and by encouraging private institutions to invest in the health sector.

But a combination of factors, including the exodus of trained health practitioners to Europe and other countries in Africa able to pay more, means that the doctor patient ratio has gotten worse in recent years. Two hundred new doctors graduate in Uganda every year according to the ministry of health, but a third of these soon seek greener pastures elsewhere.

The situation is worst in rural Uganda because health practitioners who do stay in the country prefer to work in urban central region where better facilities are available.

Mpigi district is succeeding in providing health services using the community volunteers and the results are encouraging.

Reste Nanziri, a nurse in Gombe hospital and the village health team coordinator, says the number of malaria cases among children under five reported at the hospital has decreased and there are also fewer cases of anaemia diagnosed among the under fives at other health facilities.

The district is also registering an increase in immunisation coverage and new antenatal clinic attendance thanks to active village health teams.

"We need to pat ourselves at the back for the achievement, but credit should also go to the village health teams who have been instrumental in reducing malaria and other diseases especially among children below five years," says Reste Nanziri, a nurse in Gombe hospital.

Mpigi district launched the village health team programme in August 2004, shortly after receiving a grant of $40,000 from the Global Fund to Fight AIDS, Tuberculosis and Malaria . Fifty one people took part in a workshop preparing them to train VHT members, and the programme was explained to local councillors at the local government level, who then took responsibility to select just over 3,000 people for the village health teams.

Women make up 1,759 of the selected team members. Just over half of those selected were already informal pharmacists in their areas, selling medication throughout the district. The village health teams are linked to nearby health units and have been provided with identification badges, t-shirts, bicycles, pay phones and household registers to facilitate their work.

They carry out health education during home visits to members of the community and at community gatherings and distribute anti-malarials, vitamin A, condoms, albendazole – a drug used for de-worming – and oral rehydration solution for use in cases of diarrhoea.

During home visits, they collect data and maintain registries on disease symptoms seen; they are instructed to identify, notify and refer cases they cannot handle.

The Mpigi District experience and the increased coverage of key interventions registered is an example of what community participation in the health delivery system can do but consolidating this will still require government to increase support for community-based providers and attend to referrals.

James Kakooza, state minister for primary health care, says Village Health Teams are being recruited all over the Country to strengthen care at the village level.

According to the Uganda health consumer’s organization, a civil society organization advocating for the rights of health consumers, there is a need for government to match policy with resources evidenced by fund allocation and actual provision of funds.

On the ground in Gombe, Kito worries that recent irregular re-supply of "Homepack" kits to his members means that health facilities will soon be crowded again because the volunteers will not be in a position to give first line treatment to minor cases.

It's not perfect yet, but it's an improvement.