EGYPT: Thanks to Facebook, Young Women Take to Political Activism 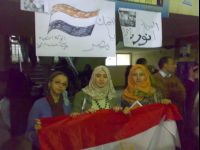 "Technological advances have provided a greater scope for political participation by a new generation of young women, traditionally inclined to staying in the home," Hossam Bahgat, director of the Cairo-based Egyptian Initiative for Personal Rights, told IPS.

The phenomenon has become particularly notable since the advent of the ‘April 6 Youth’, a grassroots movement seeking peaceful political change. The movement takes its name from a general strike held on Apr. 6, 2008, when a planned labour action at a public-sector textiles company turned into a nationwide protest against skyrocketing food prices and political stasis.

The young were mobilised through mobile-phone text messages and Facebook – where one of its online groups currently boasts more than 75,000 members.

On Apr. 6 this year, the ‘April 6 Youth’, which is not affiliated to any particular political party or ideology, again urged Egyptians to voice dissatisfaction with the ruling regime by staging peaceful demonstrations countrywide.

Last year’s strike saw the arrest of hundreds of activists and strike leaders, including 29-year-old Israa Abdel-Fattah Ahmed, a founding member of a Facebook group. Although she was released some two weeks later, Israa – who became the face of the nascent April 6 Youth movement – was the only woman to be detained over the course of the strike.

This year’s action, dubbed a national ‘Day of Anger’, saw a total of seven young women briefly detained on charges of inciting unrest.

On Apr. 1, security forces arrested Sarah Rizk and Omniya Taha, both 19 years old, on charges of disrupting traffic and "incitement against the ruling establishment." The two university students had been distributing flyers on the campus of Kafr al-Sheikh University calling on citizens to participate in planned demonstrations.

Three days later, a group of 17 young people were arrested, including five women, while protesting Rizk’s and Taha’s detention outside a Kafr al-Sheikh courthouse in Egypt’s Nile Delta.

On Apr. 5, all seven women were released, Rizk and Taha having posted bail payments of 1,000 Egyptian pounds (roughly 180 U.S. dollars) each.

While Rizk calls her and her compatriots’ release a "victory", it remains unclear whether or not they will eventually face trial. "We don’t know whether the case will go to court or not," Rizk told IPS. "Even my lawyers are confused as to what the next step is."

Esmaa Mahfouz, a 24-year-old administrator on an April 6 Facebook group, attributes the speedy release to government fears of making popular heroes of the detained women.

Female interest and participation in political activism are clearly on the rise. "Young women constitute one of the country’s biggest demographic groupings, and I suspect they will become increasingly influential in the future," observes Bahgat.

Egypt, a conservative, majority-Muslim country, has traditionally seen limited female political participation. Of the 454 representatives in Egypt’s national assembly, less than 10 are women, although draft legislation establishing a minimum quota for female MPs is now under discussion.

According to Bahgat, the recent spike in female political activism has been driven primarily by innovations in communications technology.

"All over the world, novel means of communication have opened up new channels for political involvement," he said. "And Facebook in particular has provided a new forum through which Egyptian women are both broadening their political horizons and making their voices heard."

Bahgat’s assertion was substantiated in conversations with a number of politically active young women.

"It’s not common in Egypt for women our age to be active politically, but through Facebook we have found a means to meet likeminded women our age and exchange views about ways to improve the country," said Rizk, an April 6 member since last July. "Political activism shouldn’t be dependent on age or gender. Women, too, should participate – even at the street level."

Mahfouz, who also works for a private telecommunication firm, agreed that the social-networking website had opened her up to a new world of political activism.

"As a woman, I didn’t have much political experience and only saw popular demonstrations from a safe distance," said Mahfouz. "But since I discovered Facebook and began sharing my political opinions, I have even begun joining in street protests."

"I used to be mainly concerned about marriage and my everyday needs, like most women my age," Mahfouz added. "Now, though, I have a new interest in political activism – after all, I eventually want to raise my family in a secure and economically-viable environment."

Spokesmen for Egypt’s Muslim Brotherhood say they have no objection to the recent surge of female participation in political activism, despite the group’s reputation for conservatism. The brotherhood, which officially supported this year’s April 6 action, represents the country’s largest opposition movement.

"The Muslim Brotherhood appreciates the role women are playing in the April 6 Youth movement, and the price they are paying for that participation," Hamdi Hassan, prominent Muslim Brotherhood MP, told IPS. "The government claims it supports women’s rights, yet when women participate in peaceful political activism, they’re arrested."

Although Rizk complains she was subject to some mistreatment during her recent detention, she has no plans to give up her newfound activism.

"Despite the intimidation, I know the Egyptian people are on our side," she said. "My recent brush with the law has only made me more resolute."