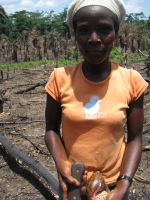 Liberia's new farmers like Jeanet Gay (above) do not have husbands to support them and their children Credit: Rebecca Murray/IPS

The women belong to a local cooperative, Women and Children Development Secretariat (WOCDES), and wake early for the 5-km hike down the dirt road to their farm near Zwedru, Grand Gedeh County, in Liberia’s vast forest region on the Ivorian border.

Their day is spent in hard manual labour, hunched over and digging at the soil with small spades. Between them they plant three hectares of seed under a blazing tropical sun, stopping only for a staple meal of rice and cassava leaf.

Jeanet Gay is one of the farmers. A 35-year-old mother, she fled the civil war’s fighting to Monrovia, the Liberian capital, only for her husband to be murdered by militiamen on the city’s main bridge. Her mother, father and nieces were all killed at home. Neither of her work companions have husbands to support them and their children.

The women’s ‘upland’ rice crop will take up to six months to grow and harvest, and as much as 40 percent of the crop may be lost to birds, groundhogs and other vermin. Meanwhile, the farm’s ‘lowland’ or swamp area, which is naturally irrigated, is reserved for introducing one hectare of rice breeder seed called Nerica.

Rice is the largest staple food for Liberia’s 3.5 million people, and provides a quarter of the daily domestic diet.

But, lacking essential tools, fertilisers and the vital infrastructure to access markets, many subsistence farmers view rice cultivation as too labour intensive. Their efforts can reap greater reward through planting alternative cash crops and buying imported rice instead.

According to the Food and Agriculture Organisation (FAO), Liberia produces only 40 percent of its total annual rice requirement domestically, and relies heavily on international imports for the remaining 60 percent.

Liberia is not alone. Like many West African countries, its years of brutal conflict drove much of its rural population to urban centres. In January 2009, the Barcelona-based agricultural watchdog, GRAIN, reported, "Partly because of the rapidly increasing urban population, sub-Saharan Africa has gone from producing more rice than it needed (112 percent of domestic consumption) in 1961 to importing 39 percent of its consumption in 2006." "Annual imports cost almost 2 billion U.S. dollars," they add.

Meanwhile, a global food crisis, exacerbated by the worldwide economic meltdown last fall, has had a severe impact upon the price of imported rice. In Zwedru’s colourful main thoroughfare, food suppliers display only the most widely available variety, Chinese butter rice, which has virtually doubled its local value of a 50kg bag to 40 U.S. dollars since 2006

In 1979, President William Tolbert’s plan to encourage local rice growth backfired among a hungry Liberian population. In his efforts to promote domestic rice production, heavy tariffs were imposed on the cereal’s import. The price of rice soared, sparking violent riots, which many believe led to the violent overthrow of Tolbert’s regime the following year, igniting the long civil war.

"We are importing Nerica breeder seeds from the West Africa Rice Development Agency (WARDA), which are then multiplied into foundation seeds at Liberia’s Central Agricultural Research Institute (CARI)," says Quan Dinh, the USAID-backed advisor to the Ministry of Agriculture. "These seeds will ultimately be distributed to NGOs and the private sector to modify into certified seeds."


Short for ‘New Rice for Africa’, Nerica is an Asian-African hybrid, which is heavily touted by Liberia’s Ministry of Agriculture for its short three-month growth period and, according to a United Nations Food and Agricultural Organisation (FAO) study, it has a 25 percent increase in yield over non-hybrid strains.

Thirty kg of Nerica breeder seeds were recently donated to WOCDES by the local branch of the international development charity, German Agro Action, and will be planted within two weeks.

Nerica is promoted as an antidote to the West African country’s painful ‘hunger gap’, which runs through the rainy season from April to July. This is when the 75 percent of Liberia’s rural population who live by subsistence farming begin to exhaust their food stores before the new crop is ready for harvest.

“This is a dream for me,” says WOCDES founder, Betty Doh, about the organisation’s activities on her family’s 275-hectare plot of land. Although Liberian law bans women from inheriting land, Doh’s brothers, who received the property when their father died, encouraged her farming initiative wholeheartedly.

“We see there is a need for food. Especially for women. We have to help them,” says Doh. “Some of them are trying to find a place to help themselves. Their husbands are gone, either died in the war or gone, and their children are left unattended. The women have a lot of troubles.”

Originally from Zwedru, Doh spent her career working at the Ministry of Foreign Affairs in Monrovia during the decades-long civil war that devastated the country. “I came back briefly in 2003 just to see – I saw a lot of empty land and empty houses,” she says sadly.

For Liberia’s subsistence farmers like Jeanet Gay, however, the Nerica may not offer such a ready solution to their annual hunger gap – indeed it may ultimately threaten their livelihoods.

“To achieve good results, farmers must have easy access to fertilisers, pesticides and extension services, which the vast majority of them simply do not have,” says GRAIN. “Perhaps the most serious concern with Nerica is that it is being promoted within a larger drive to expand agribusiness in Africa, which threatens to wipe out the real basis for African food sovereignty – Africa’s small farmers and their local seed systems.”

In Grand Gedeh County, Betty Doh’s WOCDES, the South Eastern Women’s Development Association (SEWODA) and the Grand Gedeh Rural Women’s project are a few of the farming collaboratives initiated by women hoping to transform from subsistence farming, and into small profitable agricultural businesses.

But they have a long way to go. In an impoverished nation where unemployment hovers around an estimated 85 percent, all are looking for funds. Doh financed the farm’s upland seed purchase herself, but lacks the machines, fertilisers and effective pest deterrence to farm her rice crop efficiently. She is unsure where she will get another batch of Nerica grain for the low lands, when what was given to her runs out.

For ordinary subsistence farmers, the annual cycle of harvest and hunger threatens to continue, committing them to a lifetime of relentless labour to satisfy their basic needs.

“When I got back, I cried every day for some time, because I saw Zwedru destroyed, and it was empty for me,” remembers Jeanet Gay. “My husband, mother, father, and brothers all lost. But I adjusted after some time, and haven’t left since.”

“I want to make some money, and take care of my children. After this work I just try to forget and go to bed and feel fine the next day.”