MIDEAST: Gaza Collects So Much Rubbish

GAZA CITY, May 29 2009 (IPS) - Suliman Khodari begins his shift at 5am on one of Gaza City's busiest streets. With his horse-drawn cart, Suliman spends seven hours every morning hauling away the rubbish left by residents and shop owners of the neighbourhood. But he is not a scavenger. 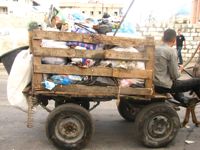 Suliman is one of 150 animal cart owners currently collecting garbage for the Gaza City municipality. Two years of economic blockade and Israel's recent assault on the territory have crippled the ability of municipalities to get rid of solid waste.

Shortage of fuel and spare parts have rendered the majority of the Gaza Strip's garbage trucks unusable for rubbish collection – and the ones that are left require almost daily maintenance. Local governments have been forced to rely on animal carts as a result.

"Because of the siege, and now after the war, we are working in a crisis situation all of the time," says Gaza City's director of environment and health, Abdel Rahem Abulkumboz.

"Our work is based on the fact that we are constantly in a state of emergency," he says.

On Dec. 27, Israel launched a three-week assault that killed over 1,400 Palestinians and decimated wide swathes of infrastructure across Gaza.

The Gaza Strip maintains three major landfills for its 1.5 million inhabitants – in Gaza City, Deir Al-Balah in central Gaza and Rafah in the south.

According to the Early Recovery and Reconstruction Plan for Gaza presented by the Palestinian Authority (PA) to international donors at the February Gaza reconstruction conference at Sharm El-Sheikh, Egypt, Gaza's solid waste sector needs an immediate injection of three million dollars to function properly over the next year.

In the Rafah municipality alone, home to 150,000 people, over 275,000 dollars in damage was done to solid waste infrastructure, according to a rapid assessment made by the local government in March.

But nothing from the 2 billion dollars in reconstruction funds pledged by international donors at the Sharm El-Sheikh conference has been received – and high recovery costs have further impeded local governments from rehabilitating their solid waste services.

"The population doesn't have enough income to pay for even their basic needs, so how can they pay for our services?" says Mohammed Al-Halabi, director of international cooperation at the Gaza City municipality.

"Our fee for trash pick-up is eight shekels (two dollars) per month, and sometimes we can't even collect that," he says. "The disposal of one tonne of solid waste costs between 80 and 100 shekels (20-25 dollars). The municipality just doesn't get that money back."

Also during the war, garbage collection services came to a virtual standstill, and 22,000 tonnes of rubbish consequently piled up in residential areas across Gaza, attracting flies, mosquitoes and rats.

In addition, approximately 600,000 tonnes of debris, from damaged homes, businesses and factories overloaded the already weakened system in the aftermath of the war.

"The war was a disaster for our capacity to remove and dispose of waste properly," says Al-Halabi. "We have trouble collecting and transferring normal waste. How could we possibly remove all of the rubble, too?"

Abulkumboz says the inability of municipal governments to separate hazardous medical waste from regular household waste continues to pose a major health risk to both the civilian population and to solid waste workers.

"Much of the rubble contains high levels of asbestos," Abulkumboz says. "And it is well known that asbestos causes cancer. The children, the scavengers, the people who live near this garbage – they are all at risk."

Gaza City – home to the strip's largest population centre with 550,000 of the strip's 1.5 million inhabitants – produces 600 tonnes of solid waste each day.

Its landfill, seven kilometres east of the city centre and on Gaza's border with Israel, receives an additional 400 tonnes of waste from Jabaliya, Beit Lahiya and Beit Hanoun in the north.

Al-Halabi says the landfill will reach its full capacity by the end of this year, and that the municipality will need to secure new land in order to accommodate the growing amount of solid waste produced by the city's inhabitants.

An additional landfill has been established temporarily at the centre of Gaza City. "We are currently looking for funds to help the municipality purchase and prepare more land to expand the site," Al-Halabi says.

"And eventually we will need to look towards new technologies for waste disposal, because I think it's obvious Gaza has a shortage of land."

According to the Palestinian Central Bureau of Statistics (PCBS), 0.04 square kilometres of land is consumed ever year for waste disposal purposes in Gaza. The territory is just 365 square kilometres.

But Abulkumboz says there is little use in discussing any long-term solutions for Gaza's mounting rubbish problems as long as the municipalities are bankrupt and the borders are closed.

For now, Abulkumboz says, he and his counterparts would be content just with spare parts for the vehicles and enough fuel to allow them to collect and transfer the waste properly.

With summer approaching, and as Gazans begin heading to the beach, Abulkumboz says Gaza's minimal solid waste resources will be stretched even further.

"All we want is to be able to get the trash off the streets and keep our people healthy. That's it. But with what little we have now, we can't even do that."