UNITED NATIONS, May 21 2009 (IPS) - The United States, the only country to launch a military strike with nuclear weapons, and Japan, the only country to have suffered nuclear devastation, will have to jointly take the initiative for the creation of an international convention to ban all nuclear weapons, says one of the world’s longstanding advocates of nuclear disarmament. 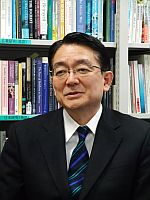 The Tokyo-based Soka Gakkai International (SGI), a Buddhist association with over 12 million members in 192 countries, is planning to intensify its global campaign for the abolition of nuclear weapons.

The campaign, which began in 1957, has picked up steam following U.S President Barack Obama’s public declaration in Prague last month that the “United States will take concrete steps towards a world without nuclear weapons.”

“President Obama for the first time clearly addressed the moral responsibility of the United States, the only country to have used nuclear weapons,” says Hirotsugu Terasaki, SGI’s executive director of the office of peace affairs in Tokyo.

During a visit to New York to participate in a meeting of the preparatory committee of the 2010 review conference on the Nuclear Non-Proliferation Treaty (NPT), he said: “As the only country to have suffered the use of nuclear weapons, I believe Japan must respond to this by reaffirming its own responsibility to the human future.”

In an interview with U.N. Bureau Chief Thalif Deen, Terasaki said: “If these two countries can take a firm stance based on their respective senses of responsibility, this would have an immense and positive impact on international society.”

Japan has a mission to elevate its experience of nuclear devastation into the shared commitment of all humankind to assure that this tragedy never be repeated, he said.

“In this sense, I earnestly hope that Japan will take a leading role toward the realization of a convention banning all nuclear weapons.”

IPS: Is the world closer to nuclear disarmament than ever before – particularly in the context of a new Obama administration which has pledged to work towards a nuclear weapons-free world? HIROTSUGU TERASAKI: President Obama’s recent statement is a very welcome call for the realisation of a world without nuclear weapons. This has generated important impetus for the abolition of nuclear weapons, which is now being earnestly debated in a new and different atmosphere.

There is now a real opportunity to turn the tides of history. At such times, the most important things are clear goals and bold action rooted in a sense of hope. When a social evil has continued for a long time, a certain sense of powerlessness and resignation starts to infect people’s minds.

To break free of this, it is critical that people regain a sense of hope and confidence – the belief that we can do this if we try. When there is a transformation in the consciousness of so-called ordinary people around the world, this will accelerate progress toward nuclear abolition, creating a momentum that no government can resist.

IPS: How confident are you that the other major nuclear powers – specifically Russia, France, Britain and China – will cooperate with President Obama in reducing the role of nuclear weapons in their national security strategies and put an end to nuclear weapons testing? HT: There are numerous examples of goals being achieved that at first seemed utterly impossible. We can go back as far as the abolition of slavery in the nineteenth century. In the 1990s, we saw the signing of the treaty banning landmines and, more recently, the Oslo Process that resulted in the treaty banning cluster munitions. Each of these was at first dismissed as an unrealistic ideal, but in the end they were all accomplished. In the same way, I am confident that we can also achieve the outlawing of nuclear weapons.

IPS: Is the creation of an international convention to ban nuclear weapons closer to reality now? HT: When it comes to empowering people, the other key element is establishing bold and easily grasped goals. In this sense, it is vital that we work toward the achievement of a Nuclear Weapons Convention (NWC), which will outlaw these weapons entirely.

We certainly hope and expect that the U.S. and Russia will negotiate deep cuts in their nuclear arsenals by the end of this year. But from the viewpoint of the average citizen, the existence of even a single nuclear weapon means there is a chance it will be used – with absolutely devastating effects.

This is why we need to achieve the complete abolition of nuclear weapons. We need to move toward the clear and simple goal of banning and abolishing these most inhumane of all weapons. A NWC would clarify the moral imperatives and would serve as something people can rally around.

It would establish the moral unacceptability of these weapons. It would put a stigma on nuclear weapons so that states would come to see them not as something that enhances national prestige, but as something that detracts from their standing in the international community.

We cannot underestimate the significance of countries that now possess nuclear weapons freely relinquishing the enormous destructive and deterrent power – as well as the political influence-nuclear weapons now give rise to.

This choice, which applies equally to countries that take shelter under the so-called nuclear umbrella of others, would be irrefutable proof that, as a species, human beings need not be subservient to technologies that we ourselves invented. I cannot think of a clearer or more hopeful goal than this.

IPS: What is the thrust of your global anti-nuclear campaign? HT: In August 2006, SGI president Daisaku Ikeda, made a call for action by the world’s people toward nuclear abolition. In September 2007, the SGI launched the People’s Decade for Nuclear Abolition.

Through exhibitions, DVDs, websites, etc., we are working to develop tools for international public outreach and education that we hope will inspire and empower people and civil society as a whole. We feel it is imperative that the world’s people and civil society take the lead in generating a groundswell demanding nuclear abolition and getting this heard by policy-makers.

Most people do not accept the need to continue pouring enormous financial, technical and human resources into developing, deploying and maintaining weapons whose only purpose is indiscriminate mass slaughter.

From the perspective of people and their “human security” needs – things like clean water, safe food and healthcare – there is no greater folly than building and maintaining nuclear weapons. I am confident that the more people become aware of the realities of nuclear weapons, the more firmly they will reject them.