CAPE TOWN, May 9 2009 (IPS) - With South Africa’s new president, Jacob Zuma, being inaugurated in a 9 million dollar extravaganza today, most of the country’s leaders are likely to still be recovering from the party by the time the sun rises on May 11. 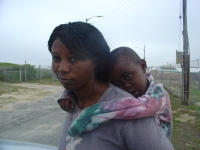 Agnes Saidi says when she and her family tried to return to their former home, her husband and 17-year-old son were shot: 'Remember your home,' they were told. Credit: Mandisi Majavu/IPS

All eyes will then be on parliament where the country’s new deputy president and as yet unnamed cabinet ministers will be sworn in.

There's unlikely to be any official commemoration to remember the day that xenophobic violence broke out in Alexandra township one year ago, spreading throughout the country, leaving scores killed or raped, and 150,000 destitute and displaced.

Presidency spokesman Thabo Masebe said, "There is nothing planned to commemorate that. There is no such anniversary – we have moved forward."

Experts say that since very little was done to bring the perpetrators to book, "future attacks are all but inevitable".

"The National Prosecuting Authority has managed a few convictions, but little effort has been made to find those behind the violence. Some of those arrested have even had charges withdrawn on pressure from communities" says Dr Loren Landau, director of the University of the Witwatersrand’s Forced Migration Studies Programme.

Landau told IPS that the end of "mass violence marked the end of political interest in xenophobia" and that media attention has since been focused on national elections and the global economic meltdown.

Facing the bleak prospect of competing for scarce resources in communities where Statistics South Africa this week pegged the unemployment rate at over 23 percent, are 460 victims of last year's violence, who have doggedly refused to leave the country’s last remaining camp for displaced people.

The residents of the Blue Waters camp, on a remote beach about 20 kilometres from Cape Town’s city centre, face eviction by the city on May 26. In the meantime, they live in UNHCR tents torn by last winter's storms, patched up with scraps of scavenged plastic and plywood hardly likely to be of much protection against this year's rain. The long bodies of dead snakes are stretched out on a part of the camp’s fence as evidence of residents' complaints about the reptiles.

"After offering them repeated opportunities to relocate, the City will seek an eviction order. We hope people will leave voluntarily before then," says the city of Cape Town’s communications head, Pieter Cronje.

Cronje says that 19,500 of the 20,000 people displaced in the Western Cape province last year "have been relocated or have returned to their countries" and that it is time for the camp to close.

The camp’s residents say they are caught in a difficult situation – all are too afraid to reintegrate into communities, none can afford the higher rent in slightly more affluent communities, but they also do not qualify for repatriation to their home countries.

Abdullah Mohamed said he came to the camp after being shot twice in the leg during last year’s attacks. He signed up with the UNHCR to go back to Somalia but they said their policy did not allow them to repatriate people to war-torn countries.

Another camp resident, Jean-Claude Manoyi from Kivu in the Democratic Republic of Congo, also wants to be repatriated. He says the United Nations High Commission on Refugees (UNHCR) says it cannot help him because he already had refugee status before the attacks, and so is entitled to live anywhere he wants in South Africa.

Manoyi says he ran away from the Samora Machel informal settlement last May after being stabbed in the hand at the start of the attacks. He was sent with his wife and children, then aged one and three years old, to the remote Silverstroom camp in Atlantis, about 60 kilometres away from Cape Town.

About three months later, after the government closed Silverstroom, Manoyi and his family were moved to the Harmony Park camp in Strand, on the outskirts of the city.

The government then closed Harmony Park and again moved Manoyi and his family, along with hundreds of other displaced people, to the city’s last remaining camp, Blue Waters in Strandfontein.

"Until now, nobody has explained why they have moved us all over the place without coming up with a solution to our problem" says Manoyi.

Manoyi is very unhappy in Blue Waters. The site is normally used as a holiday spot in the summer, but AS Cape Town’s rainy winter sets in, tent-life in Blue Waters is anything but a vacation.

"The conditions are very bad here. It is cold, there is no electricity and the government stopped those who were bringing food to us" says Manoyi. "The city is trying to freeze and squeeze us out."

Agnes Saidi is also still living at Blue Waters, despite her earlier attempt to reintegrate. Saidi held a press conference in October 2008 to announce that her husband and 17-year-old son had been shot at when they went back to the shack they had fled in Samora Machel.

Producing the bullet casing as evidence, Saidi said at the time "the community told my husband ‘khumbula ekhaya (remember your home, in the local language isiXhosa), listen to us’".

Saidi has no intention of returning to her hometown with her five children to her hometown; she says she escaped war in the Democratic Republic of Congo, and is determined to stay on at the camp despite the looming eviction order and the poor conditions.

"I told them my tent was broken, but the city official said ‘if you are tired of this place you must go back to the community because we don’t have another tent’, " Saidi says.

Government’s recent decision to grant Zimbabweans free 90-day work visas will provide some respite as it will free up government staff to focus on asylum seekers from other countries, says Nkosikhulule Nyembezi of the Black Sash human rights group.

But government must also set up a forum with civil society "to promote reintegration of displaced people into safe communities," Nyembezi says.

Author and political analyst, Andile Mngxitama, says government needs to treat black South Africans better if it is serious about ending "Afrophobic" attacks on black people from the rest of Africa.

Mngxitama says last May’s violence was not "about a fear for foreigners. It was a bout of self-hatred, learned from the past and copied from how government treats black Africans every day."

Meanwhile, Landau cautions that "the coming years will see fewer houses, fewer jobs, and less money to go around" says Landau. "Elevated expectations and diminished ability to deliver is bound to lead to disappointment – future attacks are all but inevitable."

South Africa's government shows no sign of listening to these opinions; the security of the estimated five million migrants (according to South African Migration Project) who have sought refuge from war or political persecution – or simply come in search of work – is clearly not a priority for the new government.

"What mistake we did to your government to punish us like this? To turn off the electricity, to stop the food without finding a solution to our situation?" Manoyi asks.

Perhaps a mistaken belief in the words of the constitution that a new government is being sworn in to uphold: "We, the people of South Africa, recognise the injustices of our past; honour those who suffered for justice and freedom in our land; respect those who have worked to build and develop our country; and believe that South Africa belongs to all who live in it, united in our diversity."