JAMAICA: For an Abortion Law That Reaches the Poor

KINGSTON, Jun 14 2009 (IPS) - When a Jamaican women’s group Sistren realised the voices of poor women were missing in a national debate on abortion rights, they boldly staged a play before parliamentarians reviewing a draft law that seeks to clarify when abortion can be deemed legal. 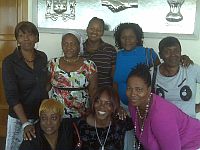 Called ‘Slice of Reality’, the performance was aimed to give "a voice to groups of women whose experiences may not otherwise be heard", says Lana Finikin, Sistren’s executive director. It tells the stories of "poor women who are being robbed of the right to make decisions concerning their own bodies" she told IPS in an interview.

The right to abortion is outlawed in Jamaica under an archaic Offenses Against the Persons Act, which is modeled along the lines of an English law of the same name, legislated in 1861. It prescribes life imprisonment for a woman who aborts her foetus and up to three years in jail for the doctor who helps her.

The common law under which abortions may be legally carried out, women’s activists say, perpetuates a situation where only the rich are able to take advantage. Abortions are allowed in cases of rape, incest, and extreme abnormality of the foetus or danger to the mother, but the only hospital that provided the service to the poor closed in the mid-90s.

Sistren’s taut, 10-minute performance on Mar. 12 was one of dozens of presentations before a joint select committee of parliament reviewing the pending Termination of Pregnancy Act. The new law seeks to clarify when abortions can be termed legal.

In Kingston’s tough inner-city communities, an unplanned pregnancy can mean a lifetime of poverty. Abortion which carries a stigma – scorn and social ostracism – is out of the reach of most women. With only a few doctors willing to do the procedure, the cost of a termination is high, starting at 250 dollars, when daily wage workers earn roughly 43 dollars a week.

As a result, according to Finikin, many risk their lives in unsafe abortions or by consuming dangerous herbal concoctions or lethal drug combinations to cause miscarriages. Health Ministry data show that between Mar. 1 and Aug. 31, 2005, there were 641 admissions due to complications from botched abortions at the island’s main maternity hospital in Kingston.

For more than a year now, the joint select committee has been hearing pro- and anti-abortion arguments as it seeks to re-write the draft legislation.

Finikin feels that the debate is confined to the rights of the foetus and the immorality of the act without regard for the reasons why women decide to abort. She is upset that a poor woman who is raped has no choice. "When you tell me that somebody rapes me, that I must walk with that trauma for nine months and then bring it to fruition…" she said, very graphically expressing the pain many women who have to raise a child born out of rape.

Development Alternatives with Women for a New Era (DAWN), a Caribbean women’s rights forum, which has been coordinating the campaign for a just abortion law for the poor, issued a statement. "To continue to criminalise abortion puts women’s lives at risk, and suggests that the right of the foetus outweighs the right of women to have control over their own body and life," it noted.

The Sistren Theatre Collective, one of the members, has been at the forefront of educating women about their rights for more than 32 years.

Meanwhile, the pro-life lobby has several well-known members of the Christian clergy in its ranks including a well-known playwright, actor and Jesuit priest Father Richard HoLung, a longtime advocate for the poor and founder of the Missionaries of the Poor.

They have accused parliamentarians of supporting abortion, "a barbaric and evil" act, in order to secure money for HIV/AIDS programmes from the European Union and the U.S., charges which both have denied.

Opposition member of parliament Lisa Hanna who is on the joint parliamentary committee told IPS that in her rural north coast constituency of South Eastern St. Ann, women and girls who are desperate to end their pregnancy resort to all sorts of life threatening solutions.

Slice of Reality portrays these and other stories of mentally ill or other challenged women and those without social support who are preyed on by abusive men, or girls who are forced into sexual relationships with gunmen in their communities.

In addition, there are teenager victims of incestuous relationships who are sworn to secrecy by their families, and women whose husbands refuse to permit them to access birth control methods.

Lobbying for support for women’s reproductive rights and (access to) abortion, DAWN states "it is a woman’s right to have all options available to her" so she can make an informed decision.

While the common law allows abortions under specified conditions, it "gives doctors the right over women’s lives since not all situations in which women become pregnant, may be strictly in line with the definition provided for under the law", according to DAWN.

With the hearing almost completed, the parliamentary committee will soon make its recommendations.

"All information taken in these hearings will be taken into consideration. The chairman will make our report to parliament and the legislation will be redrafted," says MP Hanna. She is optimistic that the committee will be able to table the bill in Jamaica’s lawmaking lower house of parliament by year end.