KARACHI, Jun 8 2009 (IPS) - “Isn’t this our country? Are we not Pakistanis? When people from Karachi came to Swat as tourists we welcomed them with open arms,” fumes Mirza Khan, 39. 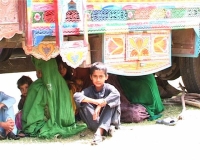 A stationary truck provides welcome relief from the blazing sun for women and children from Swat. Credit: Faisal Rafiq/IPS

Khan is very angry that Sindhi nationalists in Karachi, the capital of Sindh and Pakistan’s biggest city, are demanding that civilians uprooted by the military operation in Pakistan’s northwest against the Taliban, be stopped from entering the province.

Khan who is from Buner, south of Swat, has lived in this city on the Arabian Sea for years. He works as a chauffer, and regularly sent money home to his family until last month. Heavy fighting between security forces and armed Taliban fighters in Swat, Buner and Dir forced his wife and seven kids to flee their village in May.

The family now lives in Khan’s one room home in Karachi. Three weeks ago, eight members of his brother’s family also arrived at his doorstep. Khan took them in, an age-old tradition amongst Pakhtuns of providing hospitality to everyone, even an enemy.

The United Nations Humanitarian Commission for Refugees (UNHCR) has estimated that approximately 2.4 million people have been uprooted over the last six to eight months. Of this nearly 90 percent have found shelter with relatives and in Pakhtun villages in the North West Frontier Province (NWFP).

The Emergency Response Unit (ERU) of the NWFP government has recorded 265,122 IDPs living in 21 camps run by the government with support from the UNHCR.

The influx of IDPs in Sindh has upset Sindhi nationalist parties who fear it may alter the demography of Karachi. In 1947, when Pakistan was carved out of India as a separate nation for Muslims, Karachi’s Sindhi-speaking population was swamped by millions of Urdu-speaking Muslim refugees who were forced to leave their homes in India.

According to Zulfiqar Halepota, secretary of Sindh Democratic Forum, a coalition of Sindh nationalist groups, “Sindh should be completely sealed and all IDPs restricted to the NWFP and not allowed to enter Sindh although they should be provided all assistance and support in their own province.”

The Muttahida Qaumi Movement (MQM), an urban middle-class, Urdu-speaking political party, has also reacted adversely to the arrival of IDPs. It has suggested the IDPs must be registered, and forced to stay in makeshift camps outside the city limits.

Former director-general of the Intelligence Bureau, Masood Sharif Khattak, is alarmed by these parochial sentiments. In an interview with IPS, he warned that any attempt to stop Pakhtuns coming into Karachi would be “the first step towards a big blow to Pakistan’s solidarity and well being.”

The city’s Pakhtun population is mainly employed in hard manual work like road building and construction. “Who does all the hard labour,” asked Dawai Khan, a Pakhtun from Bajaur Agency, who has been a caretaker in an upper middle class home for over 20 years.

“Without the Pakhtuns, there would be no one to dig the roads; the construction business will collapse without the hardy Pakhtuns picking up concrete blocks; and transport will come to a grinding stop,” he said.

Still the pro- and anti-IDP lobbies can come to no agreement. “Their reservations are based on false assumptions,” said Awami National Party’s (ANP) Sindh president, Shahi Syed at a press conference. “The IDPs would return to their homelands as soon as the situation becomes normal there.” The ANP is the ruling party in the NWFP.

“I agree with the Sindhi nationalists’ stance on the influx of outsiders in Sindh. There is no doubt that Sindhis are on the verge of turning into a minority in their own province,” said Zulfiqar Shah, a researcher at the Pakistan Institute of Labour Education and Research (PILER) and himself a Sindhi.

“They (nationalist parties) have picked up the right issue at the wrong time,” said Shah.

Shah believes that if the government were to change the law to give only Sindhi-speaking people the right to run for election and vote, their political interests would be protected.

Najma Sadeque, a senior independent journalist writing for the English-language The News and Dawn newspapers is convinced IDPs should be sheltered in camps outside the city limits, as they can be better monitored.

“The municipal and other services of Karachi are already overburdened and falling apart, (and) inadequate for the mushrooming population,” she explained.

“Give the IDPs 100,000 rupees (roughly 1,200 dollars) on the condition they will not leave NWFP,” suggested urban planner Hasan.

Khattak’s is a sympathetic voice. Most IDPs who come to Karachi will not live in refugee camps. “Most will be going there because they have friends and relatives there who can help them to restructure their personal lives through finding jobs and small businesses of their own, like tea stalls, small grocery shops etc.

“It is very unfortunate indeed that we have made the proudest of people, the Pakhtuns, into beggars and into people desperate for food and shelter within their own country.”

The MQM, which has strong political support among Urdu-speaking Karachi residents, has claimed that a long-term presence of the Pakhtun IDPs could be a threat to the city’s cosmopolitan character, and add to the lawlessness here.

Not at all, argues Dr Hasan Askari-Rizvi, a Lahore-based political and defence analyst.

“MQM’s opposition to IDP settlement in Sindh stems from its ethnic character and the desire to protect its political monopoly in urban Sindh,” he said.

“The other consideration that Taliban-type elements would come to Karachi is a secondary consideration,” he added.

According to Khattak, it is up to the government to keep law and order. “As a crime control measure you simply cannot stop a Pakistani from moving to Karachi from the NWFP. It will be disastrous to do so and will sow the seeds for dissension,” he reiterated.

Halepota of the Sindh Democratic Forum has suggested that an all-party conference should be called to decide on the issue.

“The three major political parties – the (ruling) Pakistan People’s Party, the ANP and the MQM – can come together to resolve this issue,” endorsed Hasan.