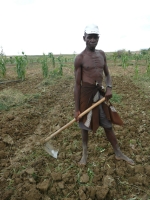 Angola was once a breadbasket of southern Africa and a major exporter of bananas, coffee and sisal, but three decades of civil war destroyed the fertile countryside, leaving it littered with landmines and driving millions into the cities.

The country now depends on expensive food imports, mainly from South Africa and Portugal, while more than 90 percent of farming is done at family and subsistence level.

Seven years into peace, Angola wants to reduce this dependence on food imports and encourage people to move back to the rural areas. To achieve this, government has launched a major stimulus plan to improve farming opportunities and increase services outside of major towns and cities.

The plan is also aimed at reducing overcrowding urban areas – particularly the country’s capital Luanda which was designed by the Portuguese for 800,000 people but is now home to over five million.

Currently, oil is Angola’s main money-spinner, accounting for 83 percent of national income. Revenue has taken a huge dip over the past twelve months, however, with brent crude prices falling by more 100 Dollars.

“Dependence on just one or two products, like oil and diamonds, makes the economy extremely vulnerable to the forces of international markets and has an impact on the long-term development of a country,” explained Ricardo Gazel, senior World Bank economist in Angola.

“Diversifying the economy into labour-intensive areas like agriculture is key for Angola’s long-term development,” he added.

During a series of high-profile government conferences, heavily promoted by state-controlled media, politicians have pledged to invest millions of dollars into rural areas, with the hope of encouraging city dwellers to return to the countryside.

Said Filomena Delgado, secretary of state for rural development: “Much of our countryside was sacrificed during the war. But now we’re at peace, and while it’s not going to be easy, we’re going to do all we can, politically, socially, economically and culturally to assist rural communities to combat poverty.”

Building more schools and health points will be, government hopes, a way to encourage city dwellers to go back home and work in newly-revamped rural farming sectors.

Douglas Steinberg, country manager for Save the Children in Angola, however, believes government’s plans are unrealistic.

“The best government can hope for is to slow the stem of people migrating into the cities to find work,” he told IPS. “I can’t see these new schemes making people want to go back. Families have settled in cities, they have married people from different provinces, so where would they go back to and what do they have to go back to if they left 20 years ago?”

Steinberg welcomes government’s commitment to reduce rural poverty, but is sceptical about its ability to deliver on its promises: “I think it is important to have better agriculture and stop being so dependent on imported food, but I don’t think we can see agriculture as the only approach.”

He believes government should also provide vocational training to young people in rural and semi-rural areas to create a variety of work opportunities in other sectors, such as mechanics or carpentry.

“In Angola, I don’t think the problem is lack of investment,” he said, “I think it is lack of engagement with communities where the investment is being made. We need to hear the voice of the people, not just government talking in their name, telling the people what they need.”

According to Caundungo, suddenly pouring money into rural communities could possibly do more harm than good: “You might have a scheme to give some farmers a tractor, but who will drive it? Who will service it? What will the workers do now that the tractor does the work, and how will the community cope with the increased productivity?”

He says although ADRA welcomed the discussion about improving rural lives but said it was key that approaches were made based on needs like training and infrastructure, instead of a broad brush approach that might not be suitable for all communities.

Twenty kilometres outside Luanda, where shantytowns start to thin and stretch into vast fields of green, most live off subsistence farming, working small patches of crops like cabbage and corn.

They sell they the little surplus they produce on roadside markets, hoping to catch trade from passing motorists. At one of the stalls, 28-year-old Teresa Jose, a mother of six, sits next to a makeshift table of bruised tomatoes and unripe corn.

“We need all the help we can get, and I hope these promises just aren’t in the government’s head,” she told IPS.