BUCHAREST, Jun 28 2009 (IPS) - On May 26, the U.S.-based Center for Investigative Reporting published ‘The Price of Sex’, a vast multi-media project by photojournalist Mimi Chakarova who spent nearly seven years doggedly unraveling the web of sex trafficking. 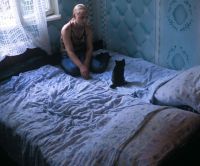 A young woman from Moldova who has returned home Credit: Mimi Chakarova

Chakarova has charted hundreds of journeys across countries in Europe and to the tiny emirate of Dubai in the Gulf, where the sex trade is booming, seemingly condoned by authorities, according to a rights activist. The Bulgarian photojournalist currently lives and works in the U.S.

"I wanted to address the complexity of trafficking, how it works, and how deeply it breaks the human spirit," the photojournalist told IPS in a detailed email interview about her work – a series of many videos, photos and text. "The impact I hope to achieve is first and foremost to inform and educate my viewers."

"Ultimately, the viewers can make a decision whether they want to take the next step and help," she says. "My goal has been to find a way to connect non-governmental organisations that work with trafficked women with those who want to make a difference. Launching www.priceofsex.org was all about linking the two in addition to storytelling."

Chakarova's work sensitively presents the tragic stories of women from countries such as Moldova or the Ukraine sold into brutal sexual slavery often by neighbours or acquaintances. The few women who manage to escape find themselves facing not only serious health issues or psychological trauma, but also the social stigma associated with having worked as sex workers.

One of the young women interviewed by Chakarova, Jenea, from a small village in southern Moldova, was sold into prostitution by a neighbour who had promised to help her get a job in Moscow. At 18, Jenea found herself locked in a hotel room in Turkey, forced to sleep with as many as 50 men on some days. She escaped after one year.

Back in her village, she now lives in a two-room house with her sister and niece, unable to find a job because of prejudice, and health problems – incontinence, a direct result of the sexual abuse suffered in Turkey. "It would have been better for me not to have been born," Jenea says softly, on camera.

Chakarova’s research certainly goes further than telling the terrible stories of trafficked women. The detailed personal accounts highlight the problems that need to be addressed if sex trafficking is to be controlled. Poverty emerges time and again as the main cause in each of her stories.

"Why do young people have to go somewhere else to work?" asks the desperate father of Natasha, a young Ukrainian woman who together with her 13-year-old daughter, would be considered as very vulnerable to being tricked into sex work. "Here we don’t live, here we just exist," he tells Chakarova. The father pins the responsibility for the widespread poverty in his country on the closing down of factories after the collapse of state socialism in Eastern Europe after 1989.

According to the photojournalist, it is crucial to inform and educate the women who are potential victims of trafficking, about the risks associated with going abroad in search of new opportunities. "Education is the biggest and most important step, in my opinion," she emailed IPS.

The project establishes the close links between authorities and traffickers that is crucial to keeping the sex trade going. Aurica, a Moldavian, tells of how when she managed to escape from pimps in Turkey, it was the local police who returned her to them, and even tried to have sex with her.

Chakarova pursued the trails of the sex trade to rich Dubai, one of the seven United Arab Emirates which has undergone explosive oil-fuelled development over the last few years. The massive presence of male foreigners, attracted by the job opportunities in Dubai, is considered the main cause for the high demand for sex workers there.

"We are an extremely globalised place with minimal regulations, and this is where it is exploited," an unidentified human rights activist from Dubai says in an interview. "And our legal system isn’t really growing fast enough to catch up, because our government is scared of regulating, in case it turns off business and development."

According to the U.S. State Department, up to 10,000 women from all over the world are being forced into prostitution in Dubai. As Chakarova's report indicates, the number of women selling sex voluntarily in Dubai is much higher.

In her documentary on Dubai, ‘Night Secrets’, the photojournalist contrasts the apparent social conservatism in the Muslim emirate with the wide availability of information on popular clubs for picking up sex workers and the price ranges, from 150 euros per night for Asian women to a bit more for African and Eastern Europeans, and up to 1,000 euros for Middle Eastern women.

The high prices paid for sexual services in Dubai mean that many women are in the trade voluntarily. "Some women choose to sell their bodies. And some are forced into it and then they choose to stay because they have nothing to return to," Chakarova told IPS.

"If you were sold to a pimp or a madam who put you through a "break in" period during which men violated your body every 15 minutes, 24 hours a day, there is hardly anything left. A lot of women perceive themselves as dirty and unworthy of anything else after that!"

Much of the responsibility for the sexual abuse lies with the clients, thinks Chakarova. "The men who purchase sex need to understand that not every woman they pay for is willing (to do what she does). If a woman is visibly bruised and locked in a room with blankets on the floor and bars on the window, she is hardly a willing participant."

"I am not naive to think that men will cease paying for sex," the photojournalist continues, "but I do hope that those who engage in this act would realise that they are equal contributors to one of the ugliest and darkest criminal industries in our time."

Just like in Turkey, trafficking in Dubai seems to be silently allowed, if not encouraged, by some of the authorities.

As she states at the end of the ‘Night Secrets’ documentary, the filming was not without risks. Chakarova’s hotel room was ransacked on her last day in Dubai. None of the other rooms in the hotel were broken into, and the front desk initially refused to call the police.

Even more, as Chakarova’s camera-woman was preparing to fly out of Dubai, the airport security confiscated all her tapes. "We had been watched and followed all the time," Chakarova observes.

"It was only after making a spectacle that they returned her tapes saying that they had mistaken her identity. Her luggage did not arrive until a month later, but a few of Dubai’s night secrets did make it out," she admits, wryly.