ZAMBIA: Controversial Chinese Firm Given Another Copper Mine

LUSAKA, Jun 2 2009 (IPS) - The desperate need to find an alternative investor for the closed Luanshya Copper Mines (LCM) in Zambia’s Copperbelt has not prevented some Zambians from fiercely opposing the government’s decision to let Chinese-owned Non-Ferrous Metals Mining Company (NFCA) run the mine. 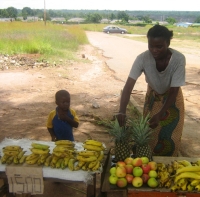 The partner of a retrenched Luanshya miner selling bananas to support her family. Credit: Kelvin Kachingwe/IPS

The choice of NFCA is controversial because 49 miners died in an accident at the Chambishi Mine which it had taken over in 2003. Five miners were shot and killed by police during violent protests over working conditions at the same mine in 2007.

LCM, a joint venture of the Swiss-based International Mineral Resources and Bein Stein Group Resources of Israel, closed on Jan 22 this year, leaving 1,700 miners jobless. The mine allegedly failed to cope with the drastic fall in the prices of copper on the London Metal Exchange from 8,000 to 3,000 dollars per metric ton.

After the mine closed, women married to the male miners petitioned President Rupiah Banda to find a buyer or for the government to take over its running. The government owns 15 percent of the shares.

Banda announced that NFCA, which owns Chambishi Mine in the Copperbelt, was chosen over the London-listed metal and mining company Vendata Resources which runs the biggest copper mine in the country, Konkola Copper Mines (KCM), as well as Luanshya Mineral Resources.

He said NFCA had promised to develop a new mine called Muliashi at LCM which will be producing 30,000 metric tonnes of copper cathodes in addition to running the mine hospital, trust school, craft school and sports and recreation facilities. NFCA has in all committed 400 million dollars to the running of the mine.

‘‘I want to assure you that this investor knows and understands the business of mining. This investor is not in Zambia just to make quick money and get out at the first sign of stress in the business,’’ Banda said.

But main opposition party the Patriotic Front’s (PF) chairperson for mines, Wilbur Simuusa, retorted that Chinese investors have a bad track record when it comes to social responsibility and mine safety and wondered how the facilities they have failed to maintain at Chambishi will be sustained at Luanshya.

Zambia has seen a backlash against Chinese influence in the local economy, largely fuelled by workplace accidents; concerns over poor working conditions and low pay at Chinese-run copper mines; and resentment over an influx of Chinese traders into the apparel industry.

In 2006, Zambian miners were killed in an accident at the Beijing General Research Institute of Mining and Metallurgy explosive factory, a multi-million dollar joint venture between China and the NFC Africa Mining Company. The accident, caused by a massive explosion inside the manufacturing plant, killed all of the workers who were trapped inside.

China’s involvement in Zambia dates back to the early 1970s, when China built a railway linking central Zambia to the nearest port city of Dar es Salaam, Tanzania.

But in recent times, there has been a hostile response against Chinese involvement in Zambia’s mining industry. The PF favours closer ties with Taiwan, making it a major campaign issue in the 2006 elections where it won the majority of the votes in the Copperbelt province, the mainstay of the country’s economy.

However, Austin Liato, the minister of labour and social security, sees nothing wrong with Chinese investment. He wonders why Zambia, which is hoping to become a middle income country by 2030, should not accept investment from China when developed economies were doing so.

‘‘These investments must be accepted. Zambians should not be hoodwinked by people with other motives,’’ Liato asserted.

But Chishimba Kambwili, the Luanshya member of Parliament who has led a fierce opposition to the Chinese running the mine, argued that the sale of the mine to NFCA would spell the end for Luanshya.

‘‘It’s not that we’re merely against the Chinese. We’re just protecting the welfare of people who have suffered at the mercy of investors who are only interested in enriching themselves at the expense of the workers,’’ he stated.

Mufulira Chamber of Commerce and Industry (MCII) president, Shadreck Musozya, however welcomed the decision to give the mine to NFCA but advised that the government should avoid a situation where workers and entrepreneurs are not adequately protected.

‘‘We want this to be of mutual benefit to both the owners of the mines and the workers and entrepreneurs, on the other hand,’’ he pointed out.

The Mine Suppliers and Contractors Association chairperson Fanuel Banda raised concern that Chambishi only deals with 150 local suppliers out of 5,000 registered ones – unlike KCM which sources from 5,000 suppliers and Mopani Copper Mines (MCM), another mining firm on the Copperbelt, which has 3,000 suppliers.

But mines minister Maxwell Mwale says NFCA is a well-established company that has a long history in mining.

‘‘NFCA scored the highest during the evaluation of the bids. They’re in this country running a mine but we’ve never heard anything negative from them since the meltdown started. They’ve continued operating at Chambishi where they’re sinking sub-vertical and access shafts at a mine which was closed for 13 years,’’ he informed Zambians.

But Makasa Chisapa, a former miner, says he does not care where the investor is from as long as they are able to pay him a good salary to support his family.

‘‘I have three school-going children but no job. The benefits I got after the mine was closed went towards paying a loan I got from the bank. So I want the mine to re-open as soon as possible so that I can stop struggling financially,’’ he told IPS.

Copper accounts for 80 percent of Zambia's foreign earnings and since 2003 has been the main driver of an annual economic growth rate of five percent.

At the peak of production in the 1980s, Zambia, which is Africa's largest copper producer, used to produce about 750,000 metric tons of finished copper annually before output dropped to 200,000 metric tons in the 1990s.

Current production is about 600,000 metric tons annually and a government projection of one million metric tons in 2010 is viewed as unlikely because of the global economic slump. The demand for commodities has dropped; leading international copper prices to tumble with the labour force being reduced, expansion projects halted and mining operations closing.