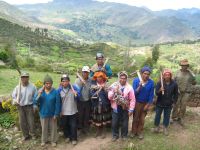 Patents and other forms of restricting access to knowledge are very worrisome in a time of climate change, says a new report by the London-based International Institute for Environment and Development (IIED).

The study was presented at meetings of the WIPO – a United Nations agency – held Jun. 23-Jul. 3 in Geneva.

WIPO aims to develop rules for protecting rights over traditional knowledge, such as indigenous knowledge about medicinal plants, which conventional intellectual property laws do not cover.

However, according to IIED's Krystyna Swiderska, who coordinated the research in Africa, Asia and Latin America, "WIPO’s call for consistency with existing intellectual property standards is a flawed approach as these have been created on Western commercial lines to limit access to inventions such as drugs developed by private companies."

Intellectual property is about restricting access, creating monopolies and eliminating competition, and it is being pushed by transnational pharmaceutical and seed companies, said Pimbert.

Biotechnology companies are using climate change and promises to develop drought-resistant and heat-tolerant crop varieties, but only if they get tough intellectual property protections, he added.

"Intellectual property standards are in conflict with flexibility and adaptability" necessary for the world to confront climate change, said Pimbert.

IIED report co-author Alejandro Argumedo, a plant scientist for the Quechua-Aymara Association for Nature and Sustainable Development (ANDES) in Peru, believes that traditional communities protect knowledge and resources in precisely the opposite way.

Ideas, seeds and life forms cannot be privatised and access to them must remain non-exclusive and benefits widely shared, he said.

The Quechua communities in the Cuzco region of southern Peru have used their customary laws to manage more than 2,000 varieties of potatoes in what is considered the centre of origin of this important food crop, Argumedo told Tierramérica.

During the 1970s, many of those varieties were taken and stored at the International Potato Centre (CIP), located outside of Lima.

Meanwhile, government policies for modernising agriculture led to the widespread use of pesticides, fertilisers and new varieties in large monocultures, which resulted in the loss of many traditional potato varieties.

To counter that trend, six communities formed the 10,000-hectare "Parque de la Papa" (Potato Park) and have "repatriated" 400 of their varieties stored at the CIP under a special agreement. Another 300 varieties will be planted in October, he said.

"The CIP understands that the intellectual property is in the community and that customary laws are important for the management of seed variety," Argumedo said.

The communities developed their own agreement for sharing the benefits derived among themselves, based on traditional principles. Potatoes are more than food; they are a cultural symbol and important to all aspects of life for the Quechua, he said.

"To have potatoes, there must be land, people to work it, a culture to support the people, Mother Earth and the mountain gods," Argumedo said.

Like many other indigenous peoples, the Kuna of Panama have developed their own protocol for access to traditional knowledge, based on customary norms.

A proposal from a researcher outside the community, for instance, has to be submitted to the Kuna general congress, discussed with the authorities of its 49 communities, and accepted by the community and traditional knowledge holders, the IIED report says.

The report also warns that the loss of such customary approaches would lead to a loss of biological diversity and traditional knowledge, and would ultimately limit the abilities of poor communities to adapt to climate change through, for instance, sharing climate-resilient plant varieties.

"In the face of climate change, keeping diverse, resilient ecosystems is one of the strongest tools for adaptation," said Argumedo.

"Indigenous peoples' worldviews don't have a place within WIPO," he added.

While WIPO does offer an international forum to debate these worldviews and their implications, countries can circumvent any rules to protect traditional knowledge by setting up bilateral trade agreements.

In its free trade agreement with the United States, Peru ignores the Andean Community trade bloc agreement regarding the protection of traditional knowledge, said Argumedo.

This bilateral agreement opens the door to bioprospecting by U.S. companies and the growing of genetically engineered crops, which Argumedo says have the potential to "destroy the richness of our landscapes."

According to Pimbert, even if WIPO were to establish rules favourable to indigenous knowledge, the United States, Canada and European Union will happily bypass them.

At the same time, traditional knowledge and customary rules are not frozen in time, but are highly dynamic and incorporate new ideas and concepts such as human rights on their own terms, he said.

"What we have here (at WIPO) is a huge clash of values," Pimbert said.