KAMPALA, Jul 4 2009 (IPS) - Africa needs a Green Revolution, but one that will increase agricultural productivity by using practices that build soil fertility while minimising harm to the environment. 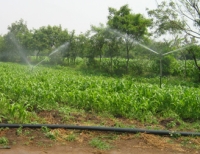 Organic farming has scored many successes: can it be adopted more widely? Credit: Nebert Mulenga/IRIN

Organic farmers, traders and researchers from are pushing organic agriculture as suitable for Africa because it is based on active management of the agricultural ecosystem rather than on external inputs.

Many scientists are urging Africa to follow the agro-industrial “Green Revolution” model implemented in many parts of Asia and Latin America to increase food production. This requires the application of agrochemical fertiliser, pesticides and other farm inputs.

National Organic Agricultural Movement of Uganda (NOGAMU) executive director, Moses Kiggundu Muwanga, says, “The call for chemical fertilisers does not make sense: they emit greenhouse gasses, both through their production and their composition of mainly nitrous oxide, and so they contribute to climate change. Besides the cost of synthetic fertiliser is too expensive for most subsistence farmers.”

NOGAMU and other organic movements in East Africa are now promoting new organic fertilisers to increase soil fertility. The fertilisers, produced in India, are reportedly 100 percent natural and contain all nutrients and micro-organisms required for plant growth.

The organic fertilisers come in both liquid and granule form. One needs 25 kg of granule fertilisers for one acre of maize.

"It is cheaper compared to chemical fertilisers where a farmer spends about $64 per acre as compared to $35," he said.

The organic fertilisers were approved by Ugandan agriculture ministry and tested on 120 hectares of sugar cane and 60 hectares of maize at the Sango Bay sugar estate North of Uganda-Tanzania border.

Wilfred Chesang, the Estate Manger of Sango Bay told IPS that "the quality of maize we get here has improved. The seed is big and we have saved the cost we used to incur on chemical fertiliser".


Muwanga, also a board member of International Federation of Agricultural Movements (IFOAM), said the suggestions put forward by the Alliance for a Green Revolution in Africa and others offer market-based solutions that could exploit an average subsistence farmer in Africa.

“The packages offered by the Alliance For Green Revolution (AGRA) will lead farmers to indebtedness and destroy our agro-biodiversity and natural resources because the aim is to shift African agriculture to depend on costly agro-chemicals and pesticides,? he said.

The cost of chemical fertilisers and pesticides in Uganda has steadily increased in recent years; a fifty-kilogramme bag of fertiliser presently costs a farmer about $70.

Victoria Burke, an advisor on export of organic products in Uganda, told IPS that “For us, it is not [just an] increase in food that matters, but also freedom farmers have from buying inputs. And being able to rely on their locally developed and adapted varieties. For us, variety selection for increased yields with rising soil fertility should start with farmers own varieties not just those bred to only respond to chemical fertiliser.”

AGRA, a prominent non-governmental organisation working to strengthen agricultural production across the continent, is advocating for a mix between organic and inorganic fertilisers in order to increase food production. The organisation has also been pushing for an input subsidy for farmers through use of vouchers that can be exchanged at agro-dealer shops.

Mubita Malumo, the vice chairperson of Organic Producers and Processors of Zambia (OPAZ) told IPS, “We reject short-term solutions through chemical agriculture. Because it cannot be sustainable in Africa; it increases environment damage and cost of production.”

Mubita said that Africa should instead build on its strengths – its land, local resources, indigenous plant varieties, indigenous knowledge, biologically diverse smallholder farms and limited use of agrochemicals.

The argument that African countries can derive greater benefits from organic agriculture than from conventional agriculture contradicts suggestions by scientists and seed companies that the continent has to adopt new seed varieties to increase production and fight pests and diseases under the changing climate.

Dr Rhoda Birech a researcher and lecturer at Kenya’s Egaton University said conventional methods of agriculture are wasteful and environmentally unsound. “In Kenya, we grow crops and burn the rest of the residue. You end up burning all the micro-nutrients needed to increase production. Organic agriculture is able to reconvert that material, and plough it back. It is a better method of maintaining soil biological fertility,” she said.

She said there is plenty of evidence that farmers can use organic methods to increase production, applying integrated management practices as well as farmyard manure.

“It has been documented that farmers in low soil fertility areas in northern Rift Valley and western Kenya for example increased maize ouptut by 71 percent and beans by 158 percent compared to traditional agriculture by incorporating soil fertility management, crop diversification and increased crop management.”

Dr Birech pointed out that “Nevertheless, we have to confirm that when we do organic agriculture, we are not mining our soil and transferring the product to Europe at the expense of Africa. We must ensure that the same organic agriculture is applying various nutrients needed to replenish the soil. Otherwise we shall end up exporting all our minerals in form of organic products and remain with nothing.”

Nadia El-Hage Scialabba, a senior officer in charge of environment and sustainable development at the Food And Agricultural Organization said, “I think personally that if there were better techniques to improve food production in rain-fed areas, we would be able to produce more food. And also produce food where it is needed other than importing.

“We have a wonderful example from Ethiopia’s Tigray region which is one of the most degraded area of Ethiopia, where in early eighties people were dying from hunger. I was there few months ago. After few years of investing in terracing and mulching, today they have doubled the production of the main crops.”

Sue Edwards, a researcher with the Addis Ababa-based Institute for Sustainable Development (ISD) in a study conducted in collaboration with the Bureau of Agriculture and Rural development of Tigray region (BoARD) on the impact of compost use, found that grain production almost doubled, from 714,000 to 1,300,000 tonnes, following a campaign to reclaim the soils by using compost manure.

But Rhoda Peace Tumusiime, the African Union Commissioner For Rural Economy and Agriculture cautioned that “organic agriculture is not a panacea to everything, but it is important that in view of the fact that it protects the environment and sustainable land management practices. But I would suggest that in arid areas like Karamoja in Uganda, you cannot just have organic agriculture and management because you need a big biomass.

“You can have both organic and inorganic agriculture depending on the type of the environment. For example, cotton in Uganda is going down because they focused more on organic. Cotton production requires fertile soils, and we have to see how we can mitigate (that situation),” she said.