AGRICULTURE: Biotechnology: Africa Must Not Be Left Behind

KAMPALA, Jul 3 2009 (IPS) - Africa must embrace agricultural biotechnology or risk being excluded from a major technological revolution that has had increased food production in the Europe, North America and Asia. 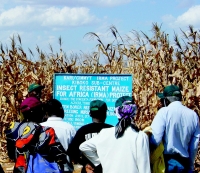 Participants at a May conference organised in Entebbe, Uganda by the International Food Policy Research Institute (IFPRI) and Uganda's National Council of Science and Technology noted that climate change, crop pests and high production costs require urgent investment in developing Agriculture biotechnology for Africa if the challenges are to be addressed.

Mark Rosegrant, director of the environment and production technology division of IFPRI said, "In the coming years, growing populations, stagnating agricultural productivity and increasing climate change will make it more difficult for Africa to fight poverty and malnutrition. To confront these challenges, many African countries are assessing a range of tools and technologies, including agricultural biotechnologies which hold great promise for improving crop yields."

"We are still languishing in poverty, hunger and devastation in Africa. Every year, you will hear one part of Africa is starving. And even if we are not starving, we are poor. But crop and tree production can bring wealth in several ways. In Kenya, the demand for tree seedlings reaches 14 million per year. We can use biotechnological techniques to stop deforestation and boost reforestation by developing fast growing trees suited for given parts of the country," she said.

The ABSF is a platform set up to promote the use of GM crops in Africa by the International Service for the Acquisition of Agri-Biotech Applications. ISAAA, in its turn, is sponsored by – among others – GM multinationals Bayer Crop Sciences and Monsanto to match biotechnological solutions with agricultural problems in developing countries.

Despite the multiple efforts to push biotech in African agriculture, Rosegrant said its adoption of has been slow in most places, due to what he described as "highly organised and effective organic and effective opponents of the technology" as well as the limited profit opportunities for GM products in Africa.

Makinde told IPS that the New Economic Partnership for African Development had begun addressing the challenge. "It is true the adoption of biotechnology has been slow in Africa yet we have seen the benefits of this tool in the rest of the world, especially the Asian developing countries like ours. We feel we need to drum it into our decision-makers that we are losing a lot of benefits by not adapting these technologies"

He added that "We at NEPAD and other regional biosciences networks are involved in strengthening the capacity of our policy makers to have that confidence, to have the knowledge and ability to process applications. Because what is happening is that when an institute – public or private – makes an application to conduct a trial, it takes them a lot of time, because (governments) don’t know how to do it (review an application).

"We are training our regulators so that they can approve or disapprove any project they think is good or not good for the countries".

The fact that genetically-modified crop varieties and biotechnology research are largely owned and controlled by transnational corporations which develop products which promise high returns is also felt to be a hindrance to Africa benefiting.

Dr Theresa Sengooba, of IFPRI's Programme For Biosafety Systems said, " We are looking at multi-lateral trade reforms to see how the African farmers can benefit from the research to increase food production. Of course we know that research is expensive and that seed companies have to make money . But they have the social responsibility and to me I think this can be done through negotiations like what has happened in a recent deal between Monsanto and Ghana government."

Rosegrant told IPS that the situation is gradually changing, with corporations like Monasnto showing interest in researching products that could suit African conditions.

"The private companies that have been developing the best GM technologies have now realised that African market is growing, so they are developing crops conducive for Africa. If the public sector can work with private companies, they could enter joint research arrangements to make the technology available. But I think none of those is possible with out a strong public sector in terms of regulatory framework, to ensure that the technology is safe and to set prices that are profitable to farmer."

African farmers will be watching developments with keen interest. There is lots of work ahead for promoters of biotechnology to develop varieties, regulations and safeguards that can satisfy government and popular demands for biosafety, as well as overcome small farmers' shortage of credit to purchase new proprietary seed every year – and perhaps a natural instinct to guard seed sovereignty.