INDEPENDENCIA, Brazil, Jul 24 2009 (IPS) - “Here you get an education for the country and not for the city, which is not where I live, and that’s why I can relate to this school,” says Israel Santos, 16, currently enrolled in the second year of secondary school studies at an agricultural school in the municipality of Independencia, in northeastern Brazil. 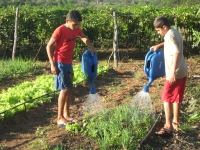 This sense of connection to the countryside permeates the Dom Fragoso Family Farm School (EFA), located in the rural part of this municipality in the state of Ceará.

The semi-arid Northeast is the poorest region in this country of over 189 million people.

The 92 students enrolled at the EFA come from 50 communities in 12 nearby municipalities. They alternate two weeks at the farm school, where they study and grow almost all the food they eat, with two weeks at home with their families, where they share and put into practice what they have learned.

“The EFA shows that you can live a good life in the countryside,” says Santos, who is one of 11 children in a family that received a 37-hectare plot of farmland in a neighbouring municipality thanks to the government agrarian reform programme.

He has been attending the school for six years, and says he “loves it” because of the value it places on small farming, which used to be “looked down on.”

This innovative educational centre was founded in 2002 through an initiative launched by the local Catholic Church diocese. It is named after Bishop Antonio Fragoso, who headed up the diocese between 1964 and 1998 and was known for his commitment to fighting for the rights of the rural poor. The school is sustained by a non-profit organisation.

Four years ago, the EFA received official accreditation to teach the eighth and ninth grades of primary school and the four years of secondary school in accordance with the Brazilian educational system. But this school offers a different kind of education, one that is aimed at preparing students for a rural life in better conditions, with the goal of stemming the exodus of young people from the countryside to the cities.

Students devote one hour every morning and another every afternoon to farming tasks, which include tending crops, seedbeds, fruit trees, livestock and even beehives. The rest of the day is devoted to class work, where theory is firmly tied to practice.

The students also do internships, visiting other communities to share ideas and pass on their knowledge of ecological agricultural techniques. Rogério Almeida, 19, told us that these stints are really an exchange process, “because we also learn from the farmers, and we respect their experience.” Almeida said he would like to go on to study journalism, but without turning his back on farming.

Francisco Isaias, another second-year high school student, confessed that it has been difficult to convince his father to give up the traditional practice of “slash and burn” farming, in which fires are set to forests, scrublands and fields to clear land for planting.

“We haven’t been able to bring an end to slash and burn farming in many families, it’s a cultural issue, but their children will farm a different way,” said Francisca do Nascimento, a grassroots Catholic activist with a degree in religious sciences and a specialisation in environmental education, who took over the coordination of the EFA this year.

Isaias, known to his classmates as the “Oldtimer” despite the fact that he is only 17, because he played an elderly man in a school play, believes that his father has finally given up this practice of burning vegetation, which “seems like a good idea the first year” but eventually leaves the soil less fertile.

“Now we only burn garbage, even though we know it’s wrong, and that we should recycle it,” he admitted.

With the help of one of his brothers, Isaias is diversifying his family’s farming activities by introducing the raising of garden vegetables, fruit trees, chickens and pigs, something else that he has learned at the EFA.

The fact that his family has a mere “999 square metres” of land has helped to convince his parents to give up the traditional practice of restricting their production to large fields of corn and beans. Increasing their productivity with horticultural crops and techniques has become a necessity.

The agricultural know-how that these teenagers have acquired made a major impression on the delegation from the International Fund for Agricultural Development (IFAD) that visited the school in late June.

The president of this United Nations agency, Kanayo F. Nwanze from Nigeria, said that it was a source of pride for IFAD to support this school through projects that it funds in Brazil.

At the end of his visit, Nwanze said he had learned a great deal about what the EFA can teach the rest of Brazil and the world. He added that Brazil has a lot to offer to South-South cooperation, emphasising the importance of family farming, which provides a livelihood for a third of the world’s population and produces 70 percent of the food consumed in Brazil and 80 percent in Africa.

For his part, Antonio Amorim, assistant secretary of agrarian development in the state of Ceará, said the farm school is a model that should be replicated. “We want an EFA in every territory in the state,” he said, referring to the seven large rural areas in Ceará where integrated development is being promoted, and which will number 13 by the end of the year.

The school’s coordinator stated that the EFA’s goal is the “comprehensive training of young people” to promote rural development. Alternating between time at the school and time at home with their families reflects the fact that “we don’t only learn in a classroom, life teaches us things as well, and knowledge is built through a combination of the two,” said Nascimento.

IFAD’s support for the school comes through the Dom Hélder Câmara Project, a partnership initiative between IFAD and the Brazilian Ministry of Agrarian Development created to strengthen family farming in the semi-arid Northeast.

The project is based on participatory processes that encompass training, production, marketing, health, gender equity, and other needs identified by the project beneficiaries themselves.

The EFA is part of a context-based education initiative in which teaching is adapted to the realities of rural areas. One of its goals is to promote means of coping with the frequent droughts in the Northeast, including greater understanding and knowledge of the semi-arid climate, rainwater collection techniques, and alternative production and value-added activities.

There are currently 100 teachers from public schools in Tamboril, a municipality near Independencia, being trained in concept-based education, which will benefit over 1,000 students.

But the EFA is seeking out new horizons. A group of 40 students are studying video production and plan to produce five DVDs this year. This is not a departure from the school’s primary goal, however, since the students will be learning to film agricultural techniques and local realities, explained Israel Santos, who is part of the group.

Living in a rural area does not rule out other talents. Moisés Santos, 16, is already working as a radio announcer, with a three-hour show about music every Saturday and Sunday at a local radio station.

He combines this paid work with his efforts to introduce – with his parents’ consent – organic (chemical-free) farming practices and new crops on the 37 hectares of land owned by his parents and their eight children. Moisés plans to go to veterinary school and specialise in small and medium-sized livestock.