BOGOTA, Jul 24 2009 (IPS) - Thousands of displaced Colombians living in a protest camp in a park in central Bogotá are the target of an eviction plan by the local authorities, who admit they are overwhelmed by the influx of people fleeing violence in the countryside. 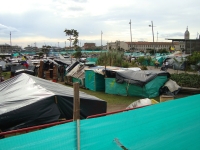 Riot police in heavy protective gear entered the Tercer Milenio park at dawn on Thursday. They encountered some resistance, but the leaders of the displaced people kept things calm, according to a local TV channel. The mayor’s office has given the campers five days to move to government shelters.

These people, displaced from their homes by the armed conflict, have been camping in part of the Tercer Milenio park for the last four months as a protest against the authorities for not providing them with assistance.

“They want to get us out of the park, but we won’t go, even when they send in the ESMAD (riot police),” Miriam López, who left the municipality of La Gabarra in the northeastern department (province) of Norte de Santander when her husband was killed nine years ago, told IPS.

“The murderers gave us five minutes to leave our homes,” said López. “It was terrible. That’s why, until the government really solves the situation, we’re staying here.”

López owned a cattle ranch in La Gabarra. Like her, many displaced people had property and were relatively well-off.

Now her home, shared with thousands of others, is one-quarter of the Tercer Milenio park, which has a total area of 16.5 square kilometres. It is crowded with tents and improvised shelters made of strips of wood and plastic sheeting.

The protest camp area was fenced off with posts, wire and heavy-duty canvas on Jul. 15, when the municipal government declared it in quarantine.

The leaders of the displaced say rumours about an outbreak of H1N1 influenza, popularly known as swine flu, are part of the strategy to evict them.

The authorities said they were concerned about the safety of children in the camp because of crimes allegedly committed there, as well as health problems among the displaced people.

The rape of a 14-year-old girl, allegedly by a man who belongs to the displaced group, was reported Tuesday. The Bogotá government said the accused man had been arrested and prosecuted, and the girl was in the care of the governmental Colombian Institute for Family Welfare (Instituto Colombiano de Bienestar Familiar, ICBF).

A video was circulated Wednesday showing a police conscript sexually abusing a 13-year-old girl in the camp, in the presence of five other police who watched and beat drums in accompaniment.

The video was filmed by one of the participating police. They were all on guard duty in the area occupied by the displaced people.

In the light of this irrefutable evidence, Bogotá Metropolitan Police commissioner César Augusto Pinzón told a local radio station he was “utterly shocked and shamed by this inexcusable incident.”

Bogotá Mayor Samuel Moreno and his Secretary of Government Clara López held a meeting of the city’s Security Council on Wednesday to seek solutions for the displaced people in the park, estimated at 2,000 people by the government and 5,000 by the leaders of the displaced people themselves.

“Each time they fail to keep their promises, more people join the peaceful protest,” one of them, Esteban, who preferred not to give his surname for security reasons, told IPS.

Colombia, in the grip of civil war since 1964, is one of the countries with the largest number of internally displaced people in the world. In late 2008, the government acknowledged there were over 2.8 million displaced people.

But the non-governmental Consultancy on Human Rights and Displacement (CODHES) estimates that 4.6 million people have been driven from their homes by the violence since the mid-1980s.

The authorities in Bogotá say the situation is “too complex, and impossible to solve without the mediation of the UNHCR” (the Office of the United Nations High Commissioner for Refugees).

The city government decreed a health alert in the park on Wednesday, and ordered the immediate evacuation of persons with any kind of illness to hospitals where they can be treated and monitored, and also of children under 14, in order to guarantee respect for “their rights,” the mayor said.

The children would be kept together with their families and moved to shelters, López said.

According to Moreno, there are 131 people with symptoms of acute respiratory illnesses, three who are HIV-positive, and others with cancer, tuberculosis and other ailments among the displaced group.

On Tuesday, the district under-secretary for health, Manuel Villamizar, told IPS “thank God, so far no H1N1 influenza has been detected in this population.” He said rumours to the contrary had arisen from misinterpretations by journalists.

But medical doctors at the Hospital Centro Oriente diagnosed 150 illnesses affecting 40 percent of the displaced population camping in the Tercer Milenio park.

“They (the doctors) examine us, but if we need medicine it is only provided two or three days later,” a woman queuing for medical attention told IPS.

Villamizar listed the common flu, rheumatism, arthritis, arteriosclerosis and cancer among the many illnesses diagnosed. Those affected need to be removed to a shelter “within the next few days,” he said.

On Jul. 10 a newborn baby girl of the Emberá Katío indigenous group died in Bogotá from H1N1 influenza. She was with her mother and 60 others in a shelter in the centre of the city.

“The lethality of the virus depends on nutritional status. The children and the families in general are living in extreme poverty,” Ati Quigua, an indigenous city councillor for Bogotá, told the press.

The protest began four months ago, when 120 people peacefully occupied the colonial church of San Francisco, in central Bogotá.

“We were removed from there with promises of support by the Catholic Church,” Esteban said. “But the number of displaced people in the protest tripled.”

They moved then to Plaza Bolívar, the political heart of the city, and remained there for two months “amidst complete indifference. Then they moved us to the Tercer Milenio park, and now they want to evict us again, providing no solution for our situation,” Esteban said.

Even if the official figure of 2,000 displaced people were correct, and “whether or not there are cases of H1N1 flu, these people are in an extremely vulnerable situation, so the government should make housing, food and support networks available,” Marco Romero, the head of CODHES, told IPS.

The government should “offer solutions instead of limiting their freedom,” he added.

Malnutrition is widespread in the group, especially among children, pregnant women and the elderly.

“Millions of poor indigenous, black and campesino (small farmer) families, who have been forced to leave their traditional territories and come to the cities as displaced people, are suffering from hunger and malnutrition,” said Quigua, the city councillor.

What the government needs to do is create the conditions for them “to be able to return to their home territories, and for the media to exercise moderation, and the population to show solidarity, in order to avoid any outbreak of discrimination” against indigenous and displaced people, she said.

The Colombian health authorities have reported eight deaths from H1N1 influenza so far, most of them in Bogotá.

Another two children have died, an eight-year-old boy with Down’s syndrome and a history of pneumonia and respiratory problems, and a 13-year-old girl, Karem Tatiana Polo, in the slum neighbourhood of Soacha south of Bogotá, the local health secretary there, Freddy Pardo, told IPS.

In this impoverished district, which receives the largest number of displaced people in the country, “we decided, with the power vested in us by the constitution, to declare an alert a week ago, in an attempt to limit the spread of the virus as much as possible,” Pardo said.

“We have also suspended all large public events, and are carrying out a vigorous awareness-raising campaign about the need to prevent the illness, based on recommendations by experts,” he said.

The Presidential Agency for Social Action and International Cooperation is responsible for looking after displaced people in Colombia.

In Kennedy, another poor area of Bogotá, 150 displaced protesters have been living on the streets for the last three months.