LUANDA, Jul 24 2009 (IPS) - "Amiga, amiga," the women shout out, "Apples, pears, pineapples…" their cries fading into the beeps and growls of the traffic noise. 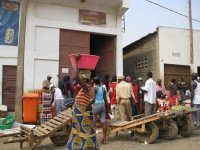 In search of a deal at a Luanda warehouse: Angola has one of the highest rates of early-stage entrepreneurs. Credit: Louise Redvers/IPS

All across Luanda, street vendors hawk their goods, selling everything from car stereo parts and locally-caught fish to fake perfume and Chinese flip flops.

Most of these products are imported in giant sacks by groups of women who travel by plane to South Africa, China and Brazil, buying up cheap produce. Other items like canned food and electronic appliances are brought in by ship.

The imported goods are then taken to the many warehouses known as "armazens" around the sprawling Roque Santeiro market.

These armazens service the myriad traders in Roque, but also supply street vendors who carry their produce into town on Angola's trademark blue and white taxis – known as "cadongueiros", literally meaning "carrying sellers" in Portuguese.

In the city centre, away from the mud and mayhem of Roque, among the glass skyscrapers and oil executives in shiny 4x4s, the price of items is doubled and, depending on the buyer's skin colour, often doubled again.

Roque Santeiro, named after a Brazilian soap opera with cult following in Angola, grew up in the early war years and was formally made a market in 1986.

But its formality stops there. Today stretching over two square kilometres, Roque is home to tens of thousands of vendors and their diverse wares.

The end of Angola’s 27-year civil war in 2002 launched an economic boom – double digit GDP growth every year since 2004 – thanks to large oil and diamond reserves.

This economic boom however has failed to create jobs for most Angolans: two-thirds still live on less than two dollars a day.

This growth has so far failed to put money in the pockets of most Angolans; two-thirds still live on less than two dollars a day. The boom has created very few formal jobs and the informal sector – believed to account for more than 60 percent of Angola’s economy – continues to thrive.

According to the 2009 Global Entrepreneurship Monitor (GEM), carried out in 43 countries across the world and published this month, Angola has one of the highest rates of early-stage entrepreneurship. One in four Angolans, the study found, were involved in start-ups, significantly higher than other economies GEM describes as production-driven, like India and Colombia.

"Being seen to be an entrepreneur is a very good thing in Angola and people respect businessmen," explained Professor Augusto Medina, president of SPI (Portuguese Society of Innovation), which carried out the study in Angola in conjunction with the Catholic University of Angola (UCAN) and the country’s largest private bank, Banco Fomento Angola.

But, he added: "This spirit of entrepreneurship is one born out of necessity.

"People cannot find jobs so they have to go out and make their own work by selling on the streets."

Informal commerce has its advantages: the most attractive element is that anyone in Angola's fractured society, be they displaced by the war, a demobilised soldier, or an illiterate woman mother running a household, can have a go. There are no entry requirements and no piles of paperwork.

On the other hand, buying in small quantities can push up costs; lone sellers often don’t have secure storage, for example; and some may feel obliged to give family or social discounts which reduce long-term profitability.

Informal entrepreneurs in Angola also struggle to access bank credit which continues, despite some improvements, to be reserved mainly for the wealthy elite with the right family ties.

In a report on Angola's informal markets, the Canadian NGO Development Workshop (DW) noted: "While entry into the informal market economy is open to anyone, regardless of their level of literacy or previous experience, those who succeed need to acquire business skills and sufficient capital to build sustainable enterprises."

A major sticking point was, DW observed, a lack of access to credit which led to people taking private loans with extremely high interest rates which left them in chronic debt.

DW and local partners have been instrumental in establishing micro-credit in parts of Luanda. The Sustainable Livelihoods Project (SLP) was based on a model of micro-finance originally developed by the Grameen bank in Bangladesh.

Groups are made up of between 20 to 30 members and have democratically-elected officials, a constitution and regular scheduled meetings.

Each group begins with a 10-week training process to strengthen trust, solidarity and leadership which must be completed before loans are made. Then the loans are made to individuals but guaranteed by the group.

By 2004, SLP had nearly 5,000 clients in Luanda and a second city, Huambo, and the project – which has since adopted a new name, KikiCredito – has been hailed as a first-rate example of a successful micro-finance initiative.

The GEM authors made a number of recommendations on how to support small businesses through access to credit, education and training, as well as making technology like the internet more accessible.

Back on Luanda's streets however, on the very bottom rung of the entrepreneurial ladder, life is harder than ever, thanks to the provincial government's new ban on street vendors.

Teams of police patrol the crumbling pavements, chasing women from their patches, sometimes seizing their precious goods. The legislation was introduced to "clean up" Luanda and concentrate sellers in designated market areas like Roque Santeiro.

But despite the high risks, traders are defiant.

"I will continue selling here," Paulo Silva, 18, said, clutching a cardboard sheet covered in sunglasses, "People aren’t going to Roque as much anymore, our customers are here and we can make more money here."

In Angola, where the trickle down of oil riches doesn't quite reach the bottom, these vendors are likely to continue fighting for a share in their country's economy for many years to come.