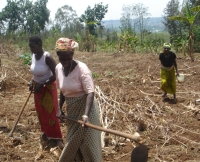 The lives of rural women are changing thanks to the new credit scheme, says govt. Credit: Aimable Twahirwa/IRIN

Rwanda's central bank has been given the responsibility of identifying beneficiaries – the sole criteria being that the projects should be aimed at women's empowerment.

On Jul. 7, the Rwandan minister of gender and family promotion, Jean d'Arc Mujawamariya, told members of parliament (MPs) that the fund was working efficiently.

Some of the projects that qualified for funding included coffee farms, shops, agribusiness and tourism, according to the central bank.

Some MPs, however, pointed out that the selection process was not as rigorous as required – a point that minister Mujawamariya did not challenge.

While reiterating the government's commitment to empower women economically in an interview with IPS, François Kanimba, the director-general of the central bank, said, "but we need to make sure that the services given (through the programme) are contributing to promote employment and alleviate endemic poverty in most rural areas."

The way forward, according to the central bank's director general, is to evaluate each project on its own merit. "No doubt all actors have common views on the advantages of the Women Guarantee Fund, but the issue here is the kind of project that has to be subsidised, when beneficiaries are applying to access loans from (the central) bank," he said.

The Rwanda central bank has established a mechanism of micro loans for all financial institutions that lend to female entrepreneurs. Loans for projects declared viable are against collateral guarantees, to be paid back over a long period.

Since the establishment of this new credit scheme early this year, at least 6,568 women have received assistance for micro- and small enterprises from the government, international donors and NGOs worth 890,000 U.S. dollars, according to the central bank.

According to Kanimba, many of these are associations that own both coffee farms and shops, for instance, in a new initiative to finance the reduction of poverty.

The associations "served as (one of) the main tools to address the multiple causes of poverty, unemployment and social exclusion especially in rural areas," minister Mujawamariya remarked. "Slowly but surely, the lives of rural women are changing following the new credit scheme," she told IPS.

But businesswoman Solange Uwimbabazi, who runs a shop at Nyabugogo market near Kigali city, insists that it is quite difficult for poor women to access credit in a situation where the process of allocation of loans by banks is far from transparent.

"There is discrimination," the entrepreneur, a mother of five, observes. "Some groups of women are excluded to benefit from loans. The wealthiest groups are considered the most," she adds.

In addition, there are complaints that women applying for credit have to put up with the rudeness of bank managers who pull them up for not fulfilling all the procedural requirements for loans.

"In many cases, people applying for loans don't justify how their project will generate income to pay back the credit," Kanimba, the central bank's director general told IPS.

"The funds are available, but people need to be educated enough on how they will manage their project and they must show that they have the capacity of ownership. (Were the business to fail) they should not be looking for scapegoats elsewhere," he said.

The Rwanda government insists the terms and conditions for loan application are very strict, and they cannot be accused of favouritism.

The government has begun a training scheme to educate women on how they can access loans for economic empowerment.

"There is a need to educate women on how they file their application for credit to the banks… In most cases, formal financial institutions are less receptive and welcoming of female entrepreneurs," minister Mujawamaliya told IPS.

At least 82 women (trainers of trainees) have been trained and will be training other women countrywide, according to an official count.

Meanwhile, the government appears optimistic the credit scheme will benefit a large number of women.

But disappointed civil society activists say the programme has not yet reached large numbers of poor borrowers in rural area, despite government efforts to overcome this situation.

"If there are no mechanisms to expand credit schemes, in order to reach women in rural areas, the situation could jeopardise the government's efforts to alleviate poverty," a civil society activist who requested anonymity told IPS.