ECONOMY-UGANDA: Traders Go Down as Prices Go Up

KAMPALA, Jul 1 2009 (IPS) - With the world economy in the grip of a credit crunch, traders and consumers in Uganda are struggling with price inflation and the depreciation of the country’s currency, the Ugandan shilling, against the dollar. Especially importers have not been able to bring goods in which were ordered when prices were lower. 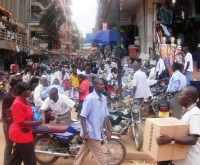 Figures from the URA indicate a revenue collection shortfall of about 43 million dollars between July 2008 and January 2009. Ugandan finance minister Syda Bumba has projected that economic growth will drop by one percent to six percent in the financial year beginning July 2009, compared to seven percent growth in 2008/2009.

Inflation has been rising by about 1.3 percent. Food prices alone have increased by 26.8 percent between January 2008 and January 2009. Exports have declined and there has been a falling demand for consumer goods.

The depreciation of the shilling against the dollar has increased the cost of imported merchandise from Europe and Dubai. Traders who had placed orders before the shilling depreciated are struggling.

Issa Sekiito, spokesperson of the Kampala City Traders’ Association, told IPS that ‘‘in the last three weeks, the complaints we have handled have been about importers who ordered consignments and have abandoned them at Mombasa Port. Chinese and other exporters are chasing them to go and pick goods.

‘‘This is happening because these goods were ordered at a time when the dollar value was lower. The URA tax assessment rate has followed suit and increased. ‘‘Traders are continuing to lose capital but selling prices have not increased. Items that are being imported are going for less money than what they cost. Many of the traders are being driven out of business because they cannot afford to keep on losing when they have to repay loans to the banks,’’ Sekiito told IPS.

‘‘I have had a series of business meetings with sectors such as importers of used cars. They are complaining about the revenue authority. Re-exporters are no longer doing business because of a lot of bureaucracy.

‘‘What is happening in the business community is that nobody can take goods out of customs without paying a top-up due to the change in the dollar rate,’’ he explained.

Mastula Namwanje is one of the people trading in Kikubo commercial zone in Kampala. She told IPS that she and her colleagues had combined money to import a container of goods from Dubai but have failed to raise the money to clear the goods from Mombasa.

‘‘Look at the shop. It is almost empty. I hoped to restock it by the end of last month because we had placed orders. But the taxes are too high due to the dollar. I cannot take a loan from the bank because it is equally risky at this time,’’ she complained.

The traders in Kampala rent shops from wealthy Ugandans and Asians. The rental costs have risen because the property owners demand payment in dollars. They told IPS that the rent keeps on increasing whenever the dollar appreciates against the Ugandan shilling.

Robby Mukasa, also from the Kikubo commercial zone in Kampala, told IPS that ‘‘I have been paying different rental amounts in the last three months because the landlord wants it in dollars. Look at the receipts, if you doubt me. We are not being protected by the government. I may not continue in the same premises because I will be working for the landlord.’’

The elderly Gertrude Kasujja deals in children and women’s clothes. According to her, many women have been driven out of the shopping malls because of unpredictable rental rates. ‘‘We were about 20 people in this mall but now four people have left because we pay too much in rent.

‘‘Customers are not buying the goods, yet the landlords want their money paid in dollars,’’ she told IPS.

Dr. Samuel Sejjaka, a management consultant and one of the directors at Uganda’s Stanbic Bank, told IPS that the situation is likely to worsen in the near future.

‘‘I don’t know whether we have reached crisis level. My estimate is that when we go towards August and the donors begin to cut some of the budget support, we shall see a fully blown crisis because that will lead the dollar to rise much faster.’’

Sejjaka further explained that current developments make for ‘‘a very interesting debate. For a long time the IMF (International Monetary Fund) and the World Bank pushed monetarist economics down our throats. But here we are back to (British economist John Maynard) Keynes, saying ‘stimulate demand to go back to full employment’.

‘‘When you have rising cost of money, it becomes very difficult to sustain your business.’’

Local companies with headquarters in the U.S. and the European Union began feeling the effects about three months ago. Barclays Bank laid off some 200 employees while GTV pay television wound up its activities in Uganda and other countries.

Uganda Manufacturers Association (UMA) chairperson James Kalibbala added that the manufacturing industry was also going through hard times because most of the raw materials are imported.

‘‘You cannot do any profitable business now because we are purchasing materials at higher prices. We are not exporting much and we have very low domestic demand for some of the products,’’ he said.