FRANCE: ‘Where Is the Burqa They Want to Ban?’

PARIS, Jul 6 2009 (IPS) - There was not a burqa in sight. On the bustling streets around Boulevard de Belleville, in one of the most diverse neighbourhoods here, women wore a variety of clothing, including summer dresses, jeans, chadors, headscarves and traditional African dress, but no burqas. 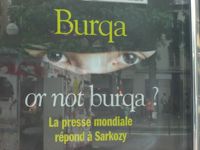 A publication at a news stand in Paris. Credit: Djav McKenzie/IPS

A trader laughed when asked if he had any burqas – the Islamic garment that covers the whole body leaving just slits for the eyes.

“Yes, I have some in stock but I’ve never sold one,” he told IPS. “I swear I have yet to sell a burqa in four years. So where is the burqa that they want to ban? ”

French President Nicolas Sarkozy declared last month that the burqa has no place in France, and that its spread must be curtailed.

“The burqa is not a religious symbol, it is a sign of the subjugation, of the submission of women. I want to say solemnly that it will not be welcome on our territory,” Sarkozy told a group of lawmakers in a speech in Versailles Jun. 22.

Some legislators had expressed concern that an increasing number of women were wearing the garment, perhaps not from choice but because of pressure from religious fundamentalists, and they urged parliament to act.

With the government now studying ways to stop the burqa’s reach, including a possible ban, Sarkozy’s comments have led not just to heated public debate but to a response from a group calling itself the North African affiliate of Al- Qaeda. The group said on Islamic websites that the French position is a war on Muslim women, and that there will be retaliation.

France now says it is on guard against terrorism, but many French citizens see the whole issue as unnecessary commotion, and even as an attempt to divert people’s attention from the economic crisis.

“In the past eight years, I’ve seen maybe one woman wearing a burqa, and I work in an immigrant district,” said a French social worker who asked not to be named.

“I think the government is trying to create a problem where none exists. They want to get our minds off the financial crisis, so they say ‘let’s talk about the burqa’. They didn’t know we’d have Michael Jackson to talk about.”

France is home to about five million Muslims, Western Europe’s largest Islamic population. Tensions have long existed between the community and the French authorities, and the new controversy could widen divisions.

Although the burqa is relatively rare here, what is more commonly worn (especially in the so-called banlieues of Paris) is the niqab – a veil that covers the head and face. It is unclear whether a ban would also affect this.

“Any prohibition by the State will be counter-productive, and put women in an even weaker position than they already are when they are forced to wear the burqa or the niqab,” says Jean-Marie Fardeau, director of the French arm of Human Rights Watch.

“This will be a limitation of freedom of expression and freedom of belief because we know that certain women are wearing these garments by choice,” Fardeau told IPS. “It’s also a prohibition that would target only Muslim women, and this would be discriminatory both on the gender perspective and the religious perspective. It’s not up to the State to make a decision for women.”

Journalists have been descending on multi-ethnic neighbourhoods to discover what Muslims think about the burqa, much to the bemusement and sometimes irritation of the residents.

“It’s all political propaganda,” says Hafnaoui, manager of a shop selling Islamic movies, books and clothing. “France has a problem with Islam as soon as the religion is visible. They want to turn people’s attention from national problems, so they have to find a common enemy. They always need to find something.”

He said he had never seen a burqa “except on television”. As he spoke, others in his shop joined in, with one man asking, “Why don’t they talk about the Muslim girls who are assaulted and insulted by French people because they wear the veil? Why aren’t they talking about that?”

Hafnaoui said the very word ‘burqa’ was meant to shock, as there are other words that could be used for similar garments, such as ‘niqab’. “The government uses the word ‘burqa’ because it’s associated with terrorism,” Hafnaoui said. “They know it will make the anti-Islamic atmosphere worse.”

A shopper dressed in black headscarf and dress said she felt “uncomfortable” when she ventured into certain neighbourhoods because she thought people objected to her way of dressing.

“Islamic dress hides a woman’s form, and it’s false to say that it’s a prison for women,” she told IPS. “It’s my choice.”

She conceded, however, that some women may be forced to wear the headscarf and that a “tiny minority” in France may be compelled to wear the burqa.

Another woman said French customs should be respected, and that wearing the burqa in France was “not correct”.

It is the women who are being forced to wear the burqa that legislators say they would like to protect, just as in an earlier controversy the issue was about protecting girls from being compelled to wear headscarves to school. France dealt with that by passing a law in 2004 banning students from wearing “conspicuous” religious symbols in state schools.

That law has both supporters and opponents, and the burqa issue is shaping up to be equally divisive, even among government ministers.

Fadela Amara, secretary of state in charge of regenerating poor urban neighbourhoods, is in favour of a complete ban, while immigration minister Eric Besson says a ban would be impractical.

Some Muslims say a ban may push women to choose to wear the burqa, or the headscarf, out of defiance, or just to assert their rights in a country that touts liberty and equality for all.

“Banning what people choose to wear is really extreme,” says Lino, a 26- year-old Frenchman who has converted to Islam. “They’re toying with one’s beliefs. I find the whole thing sad.”