THIRUVANANTHAPURAM, Jul 29 2009 (IPS) - While Kerala, in southwest India, enjoys enviable indices when it comes to health and human development, the state seems unable to shake off high chronic morbidity rates among its women. 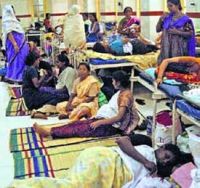 A study on the health status of people in Kerala by A. Ashok, lecturer at Kanhanged Nehru college under the Kannur University and P. Ibrahim, professor at Pondicherry University reveals that three-fifths of its female population suffers from illness related to chronic morbidity.

Morbidity is an incidence of ill health or a state of being diseased. Kerala is the only Indian state with an overall male-female ratio in favour of females.

The study published in March 2009 was based on data between January and May 2005. While it was conducted in different parts of Kerala, it has mainly focused on Kasargod which is considered as the most backward district of the state.

“Females, particularly in the poor socio-economic status have the inherent tendency of late reporting of morbidity episodes which subsequently worsens the intensity of health disorders and co-morbidities. Perception factors and delayed health care use are significant predators of higher morbidity rates across females and female-headed households,” the report said.

While analysing the higher chronic morbidity trend, Dr. Jothydev, director of the Jothydev’s Diabetes and Research Centre here in the Kerala capital told IPS that failure to go to a doctor often worsens a treatable ailment and eventually that develops into chronic morbidity. ”Diabetic complications are greater among women than among men”.

According to the report, there are four determinants that set morbidity especially in female-headed households.

There is an increase in worries and tensions for women because of large-scale male migration out of the state, particularly to the Middle East.

Dr. P. M. Mathew Vellore, director, Psycho therapy Centre in the state capital, told IPS that women in Kerala generally felt more insecure because of the prolonged absence of their men. “Every household needs a male participant for family security and the possibility of violence is a great concern.”

Sociologists assert that despite Kerala’s famed matrilineal practices and other historical factors that created a social ethos benevolent to females, mental torture of women has been increasingly recognised as an issue having implications for mental health.

Prameela Devi, a sociologist in Kozhikode, said that with women from in and around Thiruvananthapuram reporting experiences of psychological violence, the area ranked highest in this respect among the non-slum, urban areas of India.

“A woman has more worries and tensions. She wants to manage the social obligation around her. If her partner is irresponsible, she will suffer more. Where security is lost, there is a possibility of violence,” she explained.

Lack of physical exertion and utilisation of different types of consumer durables and other home appliances have increased obesity and related health problems that have an impact on overall health, the report pointed out.

The National Sample Survey revealed a high 21 percent rate of obesity among women in Kerala as against the national average of 11 percent.

According to Dr. S. Sivasankaran, professor of cardiology at the Sree Chitra Thirunal Institute for Medical Science and Technology here inactivity among Kerala women has transformed them into metabolically abnormal individuals with a lowering of the natural protection offered by female sex hormones.

“The National Family Health Survey (NFHS) has revealed that the abdominal circumferences in Kerala are high above the mean national value for urban males and females. Keralites have broadened their waistlines in the last three decades,” he added.

Zeena Thomas, a diet care professional in Kochi, said: “Women play a major role in controlling over eating. The changes in trends of a variety of food related diseases are substantiated by changes in dietary pattern”.

The fourth determinant that plays an important role in higher morbidity prevalence is denial of nutritious food and other privileges, the report added.

Dr. Mariyamma Jacob, professor at the Government Ayurveda College, Thiruvananthapuram, told IPS that mild to moderate malnutrition is prevailing in weaker sections, including women. “The nutritional anemia among women is higher in rural area than in urban places. While comparing with men, the rate of helminthiasis is higher in women; which causes anemia.”