BUENOS AIRES, Jul 20 2009 (IPS) - Little does it matter if they’re black or white, rich or poor, young or old. Neither does it matter if they work or hold a degree. In Latin America, women bear the brunt of household chores, child-raising and care of the elderly, while the state looks the other way. 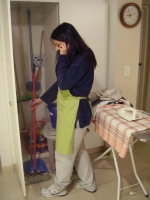 Getting ready for the second shift. Credit: Marcela Valente/IPS

To balance their multiple responsibilities, women must usually rely on strategies that fall in the private domain. If they can’t face the challenge of juggling work and domestic responsibilities on their own, they turn to another woman for help: their mother or mother-in-law, a sister, their eldest daughter, a neighbour, or – if they can afford it – a paid housekeeper or hired caregiver.

They’re the first up in the morning and the last to go to bed. Even if they work long hours outside the home, they raise the children, do the cleaning and cooking, and take care of any elderly or disabled dependants, receiving no pay, little help from men, and almost no government assistance.

With few exceptions – generally limited to legislation that covers maternity leave and breastfeeding periods – the state has no provisions or policies aimed at lightening the extra load women are forced to take on.

According to a report released this month in Chile under the title “Work and Family: Towards New Forms of Reconciliation with Social Co-Responsibility,” it is generally assumed “that caregiving is basically a private, family concern.”

The report presents the results of a study conducted jointly by the International Labour Organisation’s (ILO) Latin American and Caribbean office and the United Nations Development Programme (UNDP), as part of an effort to address what the report describes as one of the greatest challenges of our time: the reconciliation of work and family responsibilities, as a key factor in promoting equality and combating poverty.

The report indicates that the number of women active in the labour market rose from 32 percent in 1990 to 53 percent in 2008, and that the proportion of women in the 20 to 40 year age range working outside the home now stands at 70 percent.

“There has been no significant shift, however, in the dominant view of social reproduction as a woman’s responsibility, rather than a societal need,” the study says, adding that this misconception entails a high cost for women.

“Caregiving is not just a responsibility of the family – who in turn place it entirely on women – but a responsibility of the state and society as a whole,” said Natalia Gherardi, a lawyer with the Equipo Latinoamericano de Justicia y Género – an Argentine non-governmental organisation that works for the promotion of gender justice – who was one of the researchers who contributed to the study.

“The state has the legal obligation of providing the means to make such benefits available,” she told IPS. But instead, she complained, its participation is limited to marginal interventions through a handful of piecemeal laws that are not always enforced.

This neglect suggests that the state is not gender-neutral, but gender-biased, she argued. “The state is male, and so are the laws and the power structures based on the patriarchal organisation of our societies,” she said.

Women spend on average 1.5 to four times more hours than men on household chores. “This overload in terms of family responsibilities is at the root of much of the discrimination and limitations they experience in the labour market,” the report says.

The study points to the need for a major cultural transformation to accompany the many changes in family structures and the labour market, with the expansion of single-parent families and an increasing number of women working outside the home, which have left many households with no one available to work fulltime on caregiving and other family responsibilities.

But while men have so far failed to pick up their share of the work, this “cultural problem is not solely about men,” the report says.

According to the study, there hasn’t been a significant increase in public services aimed at supporting household duties. “How society works in general, with its unwritten rules, institutions and schedules, continues to assume that someone is still working fulltime on family care.”

Few countries legally require companies to provide day-care programmes for their workers, and then only when their workforce is predominantly made up of women. Paternity leave is far from widespread in the region, and not many countries provide parental or family leave for both male and female workers to care for their children or elderly relatives when they fall ill.

“Given the weakness or lack of public policies and services to help people reconcile work and family life, most families resort to essentially private, family and women-centred strategies,” the report says. Experts suggest that solutions aimed at distributing the load of family responsibilities more evenly between men and women, to reconcile family life and work, must be a “major component” of social policies.

Maria Elena Valenzuela and Juliana Martínez, the lead researchers on the study, believe that the state must move towards universal work-family reconciliation policies, so that family responsibilities are not a millstone weighing women down and hindering their personal realisation and welfare.

“The State has a crucial role to play in the development of services that are not restricted to those who can pay for them or are formally employed,” said the researchers. A solution could be to improve the capacity of social security systems through the provision of care services or subsidies to hire paid help, they added.

Women deal with it everyday

Morela Alcalá, from Venezuela, has never heard of this study. Like millions of other women in the region, she gets up at dawn to make breakfast for the family, prepare the lunch her children will take to school, leave dinner ready for the evening, and set out the heart medicine for her ailing mother.

In Latin America, not only do nursing homes for the elderly often provide inadequate care; they are also very expensive and thus only available to middle-class and wealthy families.

Alcalá is separated from her husband and works as a manicurist Tuesday to Saturday in a hair salon in Caracas. It takes her three hours to get to and from work. But she tries to compensate the long haul by “getting some shuteye” on the bus. “I’m beat,” she told IPS. When she gets up in the morning it’s still dark out, and when she comes back home, her two kids have already finished the dinner she prepared before leaving for work.

She also has to care for her sick mother. On Mondays, she takes her mother to the doctor. Mondays are the most exhausting days, because she does the cooking for the rest of the week, goes to the market, and does the ironing. When she goes to work, it worries her to have to leave her mother alone. Fortunately, two neighbours drop in to check on her every day.

The study reveals that the traditional family model – where the husband is the breadwinner and the wife a homemaker – has become the exception. A third of all households are now headed by women, who more often than not are employed in the informal sector, earning low wages, working long hours, and having no medical or social security coverage.

When Alcalá needs to take the day off from work because her mother comes down with something or is in the hospital, her employer is understanding, but her pay is still affected because she misses out on the percentage she receives for each customer she sees and on the tips, both of which are a major part of her income.

Nine percent of the population in Latin America are elderly people, and their care places an increasingly greater strain on families. In five years, the percentage of seniors will have grown to 13 percent, and by 2050, it will be above 23 percent. Only the more affluent can hire paid caregivers to cope with their elderly relatives.

With respect to this issue, the report identifies a potential solution in matching the demand for care services provided by the state and the market with the need to create decent work for women.

“By transferring some domestic tasks and caregiving to the market and public services, countries can increase and formalise already existing employment niches and create new jobs. This not only offers a new source of jobs and progress toward equality, but also offers the potential for creating decent work, all of which help combat poverty in the region,” the report says.

It also addresses another major issue: migration. According to the study, a “significant percentage of the people of Latin American and the Caribbean live outside their native countries” and women constitute “over half of those who migrate for work-related reasons.”

“Migrant workers fill the unmet need for care services in their destination countries,” the report says. In Argentina, women from Bolivia, Paraguay and Peru are training to provide services for sick, disabled and elderly people in middle and upper-class families, and are increasingly in demand as highly-valued caregivers.

Otilia (who preferred not to give her last name) moved to Buenos Aires from Paraguay with her husband and three children. Shortly after she arrived she reported her husband for domestic violence. She then moved into a state shelter with her children, where she received training as a caregiver. “I have a restraining order against my ex to keep him from coming near the house,” she told IPS.

She is now employed as a paid caregiver for the sick, but dealing with her work and family responsibilities is hard when there aren’t any other women she can turn to. “I wake the kids up in the morning, get them dressed, and leave them at school,” she said. Then it’s off to work for the next nine hours.

“If I need to leave at lunchtime to meet with a teacher or see the judge, they give me permission, and I make up for it later,” she said, adding that she’s lucky to have her 15-year-old daughter, who does the shopping, takes care of the cooking and looks after her brothers.

In Brazil, such cases are frequent. “It’s a huge sacrifice,” said Rosilene Ribeiro, a 36-year-old black Brazilian married mother of two. “You have to split yourself in two,” she told IPS. She relies heavily on her mother-in-law, who takes care of the children in exchange for her meals.

Her husband, a bricklayer, “helps out when he has no work.” When he’s out on a job, she pulls a double shift, working as a domestic outside the home, and doing all the chores in her own house. When she gets in from work, she still has to prepare dinner and lunch for the next day.

* With additional reporting by Fabiana Frayssinet in Brazil, Natalia Ruiz Díaz in Paraguay, Helda Martínez in Colombia and Estrella Gutiérrez in Venezuela.